Why It Matters to Rodney Matthews

Rodney Matthews is a legend in the world of fantasy art.  His work graces books, posters, calendars, puzzles.  But music geeks like me prefer to claim him as our own, as Mr. Matthews is on of the all-time great album cover artists

My first encounter with Matthews was via Nazareth’s No Mean City, the cover of which every guy in Black Tee Shirt Who Jammed thought was the business.  In fact, some little bastard liked the design so much that he stole my No Mean City concert tee out of my seventh grade gym locker. That was my first concert, too!  Come on!

Mr. Matthews is still hard at work with books, album covers, prints, shows, and pretty much anything else you can imagine. He kindly agreed to put down the pens and have a chat about that great Nazareth sleeve among other things:

Why It Matters: What do you remember about the No Mean City project?

Rodney Matthews: As thirty-five years have passed since my No Mean City commission, I can be excused for being a little vague. I do remember that the band got hold of a copy of my 1978 calendar ‘Wizardry and Wild Romance’, (with images based upon the works of writer Michael Moorcock), while they were recording the album in Switzerland. Their manager contacted me to ask if I would design something in a similar style for their album cover.

No Mean City was supposed to capture the essence of a novel by the same name, written about gang warfare, rampant in Glasgow, Scotland, during the depressed years of the 1920s and 1930s. When I had completed a couple of pencil sketches, I flew from Bristol up to the Isle of Man, where I was greeted at the airport by one of the band, who proceeded to whisk me off in a sports car (open-topped) to meet the rest of Nazareth at their residence.

I remember thinking “Not a bad car, but no match for my trusty Lotus Elan!”

WIM: Not much is a match for a Lotus Elan, though.  That was a brilliant little sports car.  So the boys had some idea what they wanted, sort of a “wizardry and wild romance meets gang warfare” vibe it sounds like.  Did they give you free rein beyond that?

RM: At the meeting everyone present put in suggestions, but ultimately, I was given a free hand to interpret the general concept of something aggressive with knives! The finished art was taken to Switzerland for approval by Nazareth, something I would not allow today, an email would have to do. That said, they were all regular blokes, and easy to deal with.

WIM: I’ve heard they’re a great bunch of guys.  You’ve done a lot of album covers — any idea how many?

RM: Since my first commissioned record cover from 1969 (Thin Lizzy’s New Day), I reckon I’ve done around 120, that would include some early obscure stuff. No Mean City is one of the more successful ones, and to this day the image still gets painted on bedroom walls, custom cars and trucks. 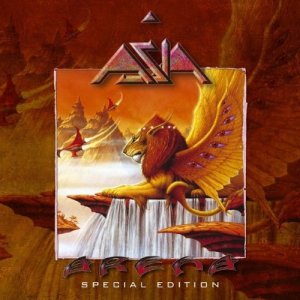 WIM: 120? Great Odin’s Beard, there’s a challenge for the completists, and a record collection unto itself.  Any favorites?

RM: I suppose the ones that have best hit the target for me, would be On A Storyteller’s Night for Magnum (photo at top of article), Tigermoth (self-titled) and third, perhaps Arena for Asia.

WIM: Why do the arts matter to Rodney Matthews?

RM: As an ex-advertising artist, I am aware that my art must help to sell the product, an album or whatever. If it does just that, I am happy. In general terms, I feel that if my artwork gives pleasure to people, or stimulates their imagination, I am encouraged to keep going. After all said, there is plenty more to come, God willing, and I hope He is, because He gave me the talent in the first place!

You can learn more about Rodney and check out his brilliant galleries, and get this — purchase signed prints — at www.rodneymatthews.com.

And you can keep up with all the latest/greatest by following Rodney on Facebook.