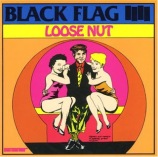 Over on Diffuser.FM this week I interview the great Henry Rollins. Man, what a treat. Love him or hate him, Henry always tells it straight. I admire that.

Sadly, part of that honesty includes confirmation that he’s done with music—not as a fan, but as a performer. If you never got a chance to see Rollins on stage, shirtless and barefoot with the mic cord wrapped around his hand, punishing himself, his songs, and anything in his sight line; well, you missed out. The guy was a force on stage.

You can still see him, though. Rollins is always on the road, delivering his cutting spoken word performances. I swear, if that guy would’ve zigged rather than zagged as a young man he would’ve been a stand up comedian.

“TV Party,” Black Flag. This is where it all started for me. I heard this cut on the Repo Man soundtrack and thought Black Flag was snarky cool. That whole soundtrack is awesome. Pick it up.

“Loose Nut,” Black Flag. Ah, the “I’ll grow my hair and piss off the skinheads” era. Loose Nut was my first Black Flag album. I traded straight across for it for—are you ready for this?—Bon Jovi’s second album.

“Can You Speak This,” Henrietta Collins and the Wifebeating Childhaters. A one off between Black Flag and Rollins Band, it’s not the best album in his discography but this cut is pretty tasty.

“Kick out the Jams,” Bad Brains featuring Henry Rollins. Rollins was kind of a punk rock Dave Grohl: a huge music fan who got to play some awesome music with and/or from his favorite bands. This one off MC5 cover from the Pump Up the Volume soundtrack is a great example.

“Four Sticks,” Rollins Band. The Led Zeppelin tribute album Encomium is a bit uneven, but this track has a spot in my rotation.

“Earache My Eye,” Rollins Band. See, told you the guy has a sense of humor, Check out this blistering cover of a Cheech and Chong classic.

“Babylon’s Burning,” The Ruts with Henry Rollins. One of the most touching stories you’ll ever hear. Don’t take my word, listen for yourself.

So, there it is: The kind of look back that Henry himself probably wouldn’t bother with, but what the hell. They were good years, Rollins. Thanks for giving it your all.