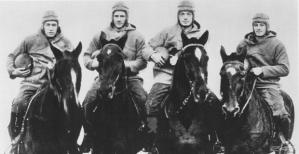 Why It Matters turns four years old this week, so why not feature some tracks from my playlist that have the number four in the title? Here’s my commitment to you: I promise not to include any cuts from Foreigner’s 4 or Huey Lewis’s Fore!

“Four Day Creep,” Ida Cox & Her All-Star Band. If we’re going to go deep, we may as well go deep. This tasty cut from the 1920s comes courtesy of Georgia’s Ida Cox, whose early days in the music business were spent in a minstrel show.

“Four Sticks,” Led Zeppelin. If you grew up on FM radio you’d think the mighty Zep only recorded three songs, but some of the tastiest cuts in the Zeppelin catalog are the ones that radio, commercials, and soundtracks ignore. This song from Led Zeppelin IV definitely fits the bill.

“Four Horsemen,” The Clash. From the essential London Calling, and the only band that matters.

“Four Women,” Nina Simone. I’m not often in a Nina Simone mood, but when I am nothing else will do.

“Three or Four,” the New Pornographers.

“Four Enclosed Walls,” Public Image Ltd. I love PiL, and Flowers of Romance is one of their best.