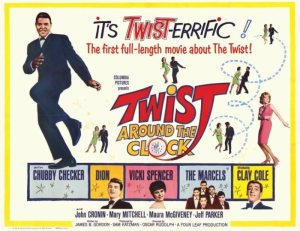 I’m not sure we grasp just how big the friggin’ Twist was.

“The Twist” made it all the way to the JFK White House. Chubby Checker’s version is the only song in Billboard history to reach #1 twice — the first time in 1960 when it was hip, and then again in 1962 when old white people caught on.

And because the song was so huge it grew beyond its own boundaries, spawning copycat songs, magazines, movies, and eventually becoming something resembling pop culture shorthand. Evoking the ’60s remains as simple as a Twist reference.

So let’s talk Twist songs that I have in my own personal stacks. Come on everybody, clap your hands!

“The Twist,” Hank Ballard & the Midnighters. This is the original version, recorded a year before Chubby Checker’s.

“Spanish Twist,” The Isley Brothers. The Isleys had a big hit in ’62 with “Twist and Shout.” This tasty instrumental is built on the same melody.

“Soul Twist,” King Curtis. Another ’62 Twist craze hit, this one cracking the top 20. What would this have sounded like if Hendrix was in the band at that time?

“Slow Twistin’,” Chubby Checker and Dee Dee Sharp. This cut is kind of a sexy version of “Poison Ivy.”

“Moongoon Twist,” The Moongooners. I’ve had this one in my stacks for over 20 years, and I didn’t know until today that Scott Walker played on it. How cool is that!

“Misirlou Twist,” Dick Dale. Even the king of the surf guitar caught the ’62 Twist wave, recasting his best known cut as a dance record.

“Twistin’ Matilda,” Jimmy Soul. Want to take a wild guess what year this was released? Yep: 1962. Soul hit #1 the following year with “If You Wanna Be Happy,” which offered sage advise like “if you make an ugly woman your wife, You’ll be happy for the rest of your life.”

That’s probably enough from me. Why don’t you sit down by the pool like you did last summer, enjoy a peppermint, and tell me what songs I missed. I’m listening.