Are You The Key To Trump’s Popularity? 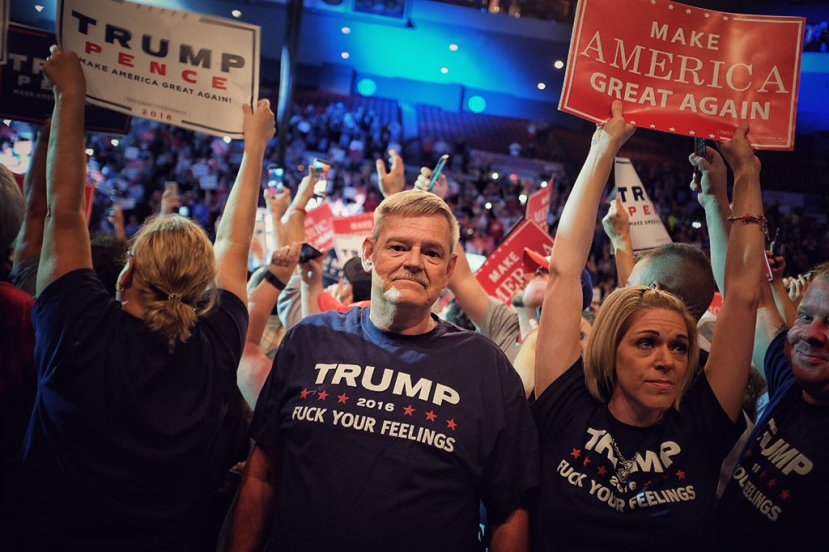 Look at that half smiling man in the photo above. He’s somebody’s grandpa and a proud member of the Burt Reynolds Mustache Society. Next to him stands It’s Always Sunny In Philadelphia’s Sweet Dee, and next to her a cherubic lad sporting a bemused grin. They seem to be having a good time at whatever rally they are attending, as do the thousands of people behind them. This is the same photo that’s been taken at political conventions for the last fifty years, with one notable exception. The three figures facing the camera wear matching shirts bearing the phrase “Trump 2016: Fuck Your Feelings.”

A lot of ink has been spilled over the last few months in an effort to explain what compels Trump voters. By any measure Donald Trump is demonstrably unqualified for the presidency, yet supporters still turn out in huge numbers when he makes appearances. Those supporters are labeled misogynists, xenophobes, racists, idiots, and disenfranchised white men. These are the simple explanations, and they are accurate for some percentage of the Trump base, but I suspect that there’s another category of Trumpeters, and contrary to what you’ve heard the Republicans did not create them.  In fact, if you’ve stuck with me for a full two paragraphs chances are that you fall into the demographic most likely to pump electricity into the neck bolts that light up this last group of creatures.

I am talking about contrarians, and by nature I am one of them. As a child I chose cooked carrots as a favorite food because kids hated cooked carrots. When everyone else wanted to bomb downhill on their bikes, I swore that the joy was in the climbing. In a high school filled with mullets, I sported asymmetrical bangs and eyeliner. In short, I was a pain in the ass.

What drove me? I suspect that a lot of my contrariness came from my environment. I naturally didn’t fit in well, a fact that my peers never seemed to tire of pointing out. My options were to embrace my otherness or assimilate, but there was no guarantee that assimilation would matter anyway. In fact, I tried throughout my childhood to become a Stepford kid, but I could never get it quite right. My Nikes weren’t the right Nikes, my Levis the wrong Levis. And then there was the simple matter of taste: There was no way I’d step into a pair of parachute pants and a Member’s Only jacket.

That was many years ago. Most of us outgrow our contrary natures as our tastes and values calcify, but that little beast still lingers beneath the surface. Given enough juice to the neck bolts, the monster breathes again. It’s alive! Alive!

What gets me stomping around the castle most often is when the villagers come after me with torches, pitchforks, and demands on my pop culture sensibilities. I’ve never seen Game of Thrones, for example, nor have I watched Stranger Things, The Walking Dead, or The Wire. I’ve never listened to Adele, and Mumford and Sons can sit on their banjos for all I care.  The more you insist that I must watch/listen/do yada yada yada, the less likely I am to do so. It’s childish, but it’s only pop culture and it saves me from wearing Ed Hardy tees and sparkly jeans.

Most of the peer pressure that I experience these days comes from social media. When I see friends piling onto a trend I grow increasingly uncomfortable. “Nobody goes there anymore, it’s too crowded” is my Berra-ism of choice. No “I stand with [bombed country of the week]” profile photo for me, though I do in fact stand with the bombed country of the week. I stand with pretty much everything. I stand with the 99 percent, for black lives and blue lives, for immigrants and refugees, women, the planet, gun rights and sensible gun regulation, and animals.

Strip away all of the caustic rhetoric and most people stand for these things. They don’t want to see Jiffy the poodle skinned alive any more than they want their meemaws grabbed by the genitals. Only Bond villains and studio executives want to see the world turned into a desolate Mad Max wasteland.

We mostly agree, and yet my social media feeds often are not social. There’s not a collective sense of “I’m interested in you” or even “I’m interested in entertaining you,” but rather a tendency to vilify and sermonize. The results occasionally read like the climax of Todd Browning’s Freaks, my Facebook friends circling me while chanting “One of us, one of us.”

Their Trump pressure doesn’t phase me, as choosing the leader of the free world is a decision I take much more seriously than what television series to binge watch, but the pressure that we exert is both tremendous and not always Trump specific. Other agendas find their way into the anti-Trump argument, and rightfully so given the number of groups that he has both threatened and offended. We repost articles that prove the candidate is a fascist, a con man, a womanizer, and so on. We toss out ultimatums along the lines of “If you’re for Trump, please unfriend me,” or “Supporting Trump is supporting [atrocity of choice].” We mean well, but in our earnestness to influence our friends, we risk poking the contrarian button.

In short, some contrarians support Trump for no other reason than we’re being so goddamned insistent that they don’t. The tee shirts at Trump rallies say it all: “Trump 2016: Fuck Your Feelings,” “Trump Can Grab My Pussy,” “I’m Deplorable,” “Haters Gonna Hate.” These are not people seriously considering who is most qualified for the job, but rather individuals reflexively taking the contrary position. They hate us telling them what to do, think, and feel more than they fear what the next four years holds. I relate to this impulse.

This is all moot at this point. The election is less than a month away, so nothing you or I do will affect the outcome this late in the game, but another topic will arise soon enough. When it does, keep the contrarians in mind before you proselytize on social media. Maybe humor is a better tool for reaching these folks, or perhaps passionless facts are the key. Maybe the trick is simply to be social on social media and leave the campaigning to the pros.

All I know for certain is that I have hills to climb and carrots to cook, and I still haven’t seen a complete episode of Star Trek, nor will I ever. Sorry, Trekkies, but fuck your feelings.