From the Stacks: Cheech and Chong, ‘Big Bambu’ (With Extras)

What makes a record worth collecting? Scarcity probably tops that list; well, scarcity combined with demand. Significantly more copies of the Beatles’ “butcher cover” exist than do Dick Pillar’s Polkabration Tour, but the latter demands a fraction of the former’s prices. Condition is a big factor, too, of course.

Unique packages are always collectible. A Beatles “White Album” with all of its inserts is always worth a few bucks, as are KISS albums with their original posters, toys, and tattoos. Finally, there’s the most important but least expensive reasons: sentimental value, or you simply enjoy the record.

This copy of Cheech and Chong’s Big Bambu checks a few of those boxes for me. It’s not rare by any means, so scarcity is out, and it isn’t in the best condition. It’s a unique package, though, with its album cover laid out like a pack of Bambu rolling papers and its giant novelty rolling paper enclosed.

Then there’s the sentimental value. I was in the second grade when the comedy duo’s fourth album, Cheech and Chong’s Wedding Album, was released. All of my little friends memorized “Earache My Eye,” mostly because we were born into a corporal punishment generation and Chong’s “What are you trying to do, tickle me?” was the thing we all wished we could say during an ass whipping.

While the kids-getting-one-over-on-the-adults humor of bits like “Earache My Eye” and “Sister Mary Elephant” were understandably funny to a grade schooler, the fact that there was plenty of stoner humor on Cheech and Chong’s albums wasn’t lost on me even if the jokes were. I don’t know how, exactly, but when I first saw Big Bambu in my buddy’s dad’s stacks I knew what the gigantic rolling paper inside was for. So did all of the stoners who bought the album, which meant that like KISS’s tattoos, Big Bambu’s rolling paper was often used by the heshers who bought the record.

So here we have three “collectible” check boxes marked: unique packaging, sentimental value, and I actually like the album. That’s enough to justify having this one in my stacks, but this particular copy of Big Bambu came with a final check box that I failed to mention previously: It has a story.

I don’t actually know what that story is, and yet I know precisely what the story is because I lived it over and over, night after night throughout my childhood. The original owner of this album, whose initials were M.F. and for the sake of simplicity we’re going to call “he,” spent hours in his bedroom, listening to records while he drew on clean white sheets of typing paper that he stole from his mother’s desk. M.F. probably drew logos for bands he’d never form with names like Paragon, Infinity, or Armada. He likely made lame attempts at fantasy art in the style of Frazetta, Corben, and Boris, or tried his hand at cheesecake, carefully copying the curves of a Playboy centerfold he kept tucked under the mattress.

Eventually, though, on the particular day in question, M.F. settled in with a #2 pencil, a sheet of Mom’s typing paper, and the cover of the album he was listening to, and he got to work. Side one of Big Bambu turned at a lazy 33 and a third while M.F. laid down his first construction lines. Sister Mary Elephant screamed, Ralph and Herbie sniffed each other’s asses, and Pedro de Pacas and Man cruised the hood in their unreliable low rider.

By the time M.F. flipped the record, the basics of his picture were all there. All that remained was the shading, so while side two wound through “The Bust” and “Television Medley,” M.F. carefully worked to bring his masterpiece to life. When the record ended with a self-referential bit about using the giant rolling paper included with the album, the young artist looked upon his work with such satisfaction that he added his initials to his drawing and slipped the piece of typing paper into the album’s sleeve.

There it sat for 40 years. Maybe M.F. died, or perhaps he got caught up in the whole “tiny house” craze and needed to downsize. Perhaps he just needed the money. Regardless, M.F. or his family brought his record collection to Dimple Records in Sacramento, California, where he (or they) exchanged his childhood treasures for a couple bucks.

That’s where I enter the story. Thumbing through the “new arrivals” bin, I saw this copy of Big Bambu. The dust jacket wasn’t in the best condition, but I checked anyway to see if its rolling paper was still enclosed.  It was, but more importantly so was M.F.’s handiwork, aged and stained, each tooth carefully drawn as were the reflections in Tommy’s glasses. That sealed the deal: This specific copy of Big Bambu belonged in my stacks.

Big Bambu with its giant rolling paper still enclosed will set you back 25-50 bucks in mint condition. Finding a copy with a teenager’s Cheech and Chong sketch on a piece of typing paper? Priceless. Happy hunting. 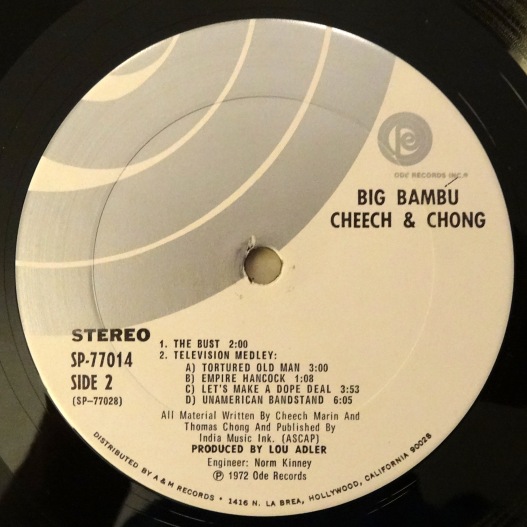 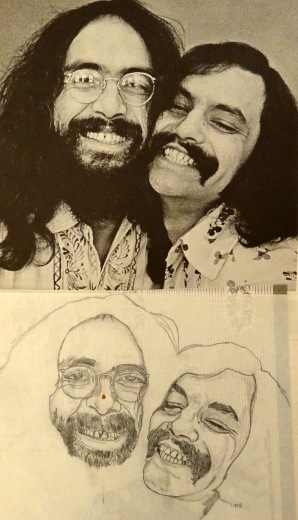 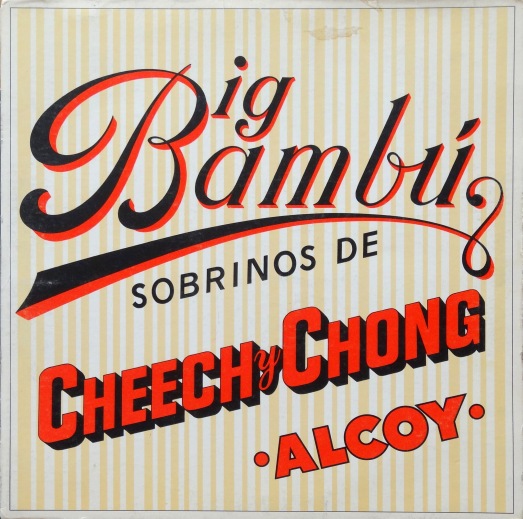 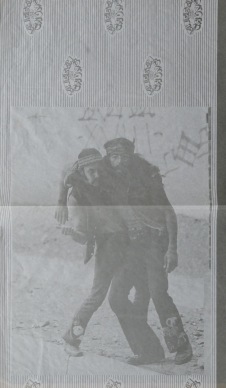