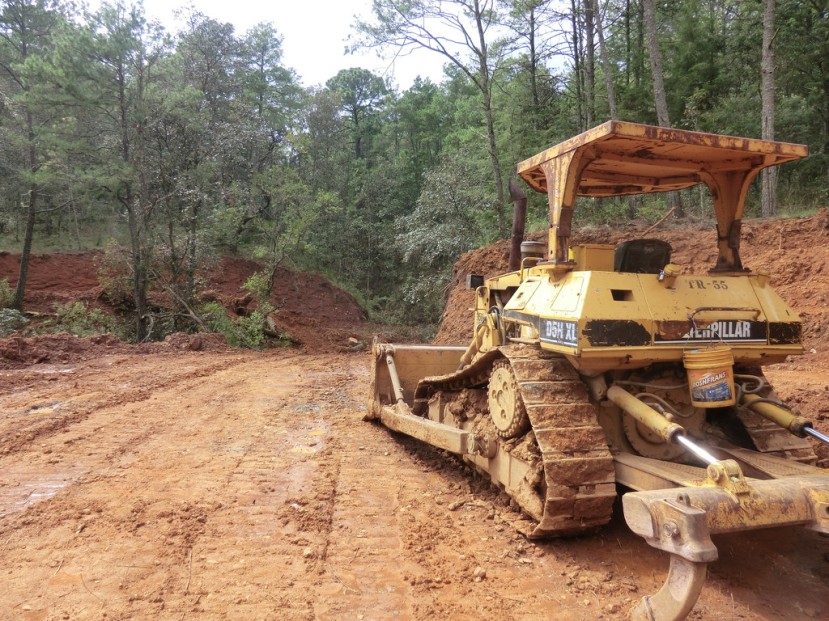 It wasn’t a house yet, just a bare skeleton waiting for someone to make it into one. The ingredients for a house lay all about the site in stacks and piles. Huge mounds of red dirt dotted the area like ancient burial mounds. Someday this would be my neighbor’s house, but for now it was a full-sized Tonka playground, and Ricky Brent and I were only a year or two past Tonka age. There was even a big, yellow bulldozer parked among piles of dirt that it had probably moved.

There wasn’t much for grade school kids to do in the rural south circa 1977. The nearest town was six miles away, but thanks to the rolling hills at the foot of the Appalachians that may as well have been 600 miles for a couple of boys on Stingrays. Chasing toads around a construction site, throwing dirt clods, and telling lies was about as good as it got for Ricky and me.

“No, she doesn’t,” I said, but what I meant was, “I will disregard that statement because I’m not sure whether I’m supposed to admit yet that I no longer think that girls have cooties.”

“Yeah she does. She told me. We were in her room listening to ‘The Night Chicago Died’ and she told me.”

“No lie,” Ricky said, and he chucked a big clod of red clay off the top of the mound that we were sitting on. “And guess what else? She showed me her beaver. No lie! Her mom almost caught us.” Now I knew Ricky was lying. The only pet Wendy’s family owned was a scruffy old yellow dog that wandered around their front yard.

The part about Wendy liking me might have been true, though. Just a week earlier we were sitting on the top bar of her swing set, and Wendy started rambling about Chachi kissing Kristy McNichol on The Love Boat. “Have you ever kissed anybody before?” she asked.

“No,” I said, and I jumped off the swing set and walked home. I knew seduction when I saw it.

Back on the red dirt hill, I asked Ricky if he ever watched The Love Boat.

“Every Friday. Julie’s a fox.”

“You should come over Friday night and watch it. My dad just bought a TV with a remote control.”

“So what? My dad’s had one of those since I was a little kid.”

“This one doesn’t have a dial, just buttons like on a phone,” I said.

We must have sat on top of that mound of dirt for at least an hour, throwing clods and talking. A full hour without Ricky screaming “The Claw!” and grabbing my face in his vice-like grip, or “figure four knee lift!” before twisting my toothpick legs into a knot. We just sat and talked while time crawled through the shimmering upstate humidity.

A lone figure appeared down the street, his head emerging above the combination of hill and hairpin that we called Dead Man’s Curve. He was a curious sight. The only people who walked around our neighborhood were younger kids like Ricky, Wendy, and me, but there he was. He didn’t walk so much as swagger: black hair feathered perfectly, tight black tee tucked into a pair of faded Levi’s. It was like some rift in the universe had relocated Fonzie six miles north of Boiling Springs.

“Act cool,” Ricky said. He dropped his dirt clod and slouched, clearly bored by the uncoolness of his surroundings.

“That’s Mike. He’s the coolest guy in the neighborhood. He can bench 200 pounds.” I believed it. The closer Mike got, the bigger he looked. He must have been eight feet tall, maybe nine, with shoulders broader than my Stingray’s ape hangers.

“I don’t know. Probably going to beat somebody up,” Ricky said.

We sat quietly atop the pile of red dirt, Ricky slouching coolly and me trying to hide my panicked expression as the teenager prowled past like a jungle cat. Only he didn’t pass. When Mike came to what would someday be my neighbor’s driveway, he turned and walked directly toward us. I made peace with my God and cursed myself for running out on what in retrospect would have been my first and only kiss. Remember me, Wendy, your very own swing set Chachi.

Mike rested a foot at the base of the hill and leaned on his leg. “What are y’all boys doing?” he asked.

“Nothing. Who are you?” Mike asked me.

“Jimmy,” I said. I considered tossing a “sir” in there, just in case.

“You live around here?”

I nodded my head.

I pointed next door.

“You got any sisters?”

“Right on,” Mike said. “Y’all see that bulldozer over there? I bet you I can drive it.”

I don’t know whether it was the challenge that emboldened Ricky or the fact that Mike hadn’t killed us yet, but he dropped his cool guy act. “No way,” he said.

“Hell yeah I can,” Mike said, and he swaggered toward the hulking piece of heavy machinery. We jumped up and trailed behind him, keeping a safe distance. Mike stepped on the metal tread of the big machine and pulled himself into the driver seat. He fiddled with the bulldozer’s various levers and pedals for a couple of seconds, and then he punched the starter button. The diesel engine bellowed and rattled, and belched a cloud of black smoke. Mike wiggled some more levers, and the dozer’s big yellow bucket rose from the red dirt like the monster’s bride. Alive! Alive!

He found the shift lever and the beast lurched forward. Ricky and I jumped back, which was hardly necessary given that we already stood eight feet away. Mike steered the bulldozer expertly around the piles of dirt and headed straight for what would someday be my neighbor’s house. I can’t prove it, but I’m sure I saw the exposed 2×4’s wince as the lumbering beast neared. If so, they shouldn’t have wasted their energy. When Mike reached the house-in-progress, he brought the big bulldozer to a stop, threw it into reverse, and then expertly backed into what would someday be my neighbor’s garage. It was the greatest feat of full-sized Tonka I ever witnessed.

He sat on his throne for a moment, the neighborhood king of heavy machinery, clearly proud that his ass cashed the check his mouth had written. With nothing left to prove, Mike went to work again on the various levers and pedals, trying to shut off the machine. The motor revved and the bucket wiggled up and down, but still the big diesel growled. He flipped switches and pressed buttons, but the engine continued idling.

After a solid minute of trying, Mike shrugged his broad shoulders, jumped down, and continued his walk down the road without a single word. Ricky Brent and I looked at each other, and then we ran back to my house before the bulldozer police arrive and carted us off to jail for excessive idling with intent to doze.

There in the basement of my parents’ new house, Ricky unleashed his barrage of claws, elbow drops, and pile drivers while we told each other lies about how scared we weren’t. I don’t know about Ricky, but I felt ten times cooler just from being in Mike’s orbit for a few minutes. I tried to picture myself with a black tee and a swagger–not a grade school boy, but a man who could do anything and was scared of nothing. Not even Wendy and her fast swing set moves. Next time I’d be ready for her.