From The Stacks: Fisher and Marks, ‘It’s A Beatle World’

Remember when the Beatles were a colossal flop in the U.S.? Probably not. The story that you likely recall is that the Fab Four landed in New York, where they were greeted by screaming girls before hopping into a limo and heading to the Ed Sullivan Show, where they achieved instant American stardom.

But in fact, the Beatles struggled to establish a beachhead in the New World. Capitol wasn’t interested in releasing their records, though that was their option as EMI’s American partner, so the band went to Vee Jay, where their first singles didn’t amount to much. Vee Jay didn’t bother to pay them either, which left the band without an American label.

Enter Philadelphia’s Swan Records, which signed a two year contract for rights to “She Loves You.” Their first try at releasing the Fab’s biggest hit was a flop, but when Swan re-released the single after Beatlemania finally took hold in 1964 the song went to #1.

It was Swan’s only chart topper, but that didn’t keep them from trying. Everybody was trying to cash in on Beatlemania in ’64, after all, and I’d imagine that Swan probably felt uniquely positioned to make a little extra Beatle bank. Not only were they the “She Loves You” label, but being a Philly based company they had access to local comedy legends Fisher and Marks.

Al Fisher and Lou Marks were an old school comedy duo of the tuxedo and punchline variety–Vaudeville, Borscht Belt, that kind of thing. Imagine Abbot and Costello, for example, but without the worldwide success. They were one of those “almost made it big” kinds of acts–well connected, well respected, worked for decades, but never achieved the name recognition of their peers.

It must have seemed like easy money to Swan: Have the team record an album of parody songs, rush it out, and cash the checks. Unfortunately, the songs aren’t terribly good.

I can’t find sales figures for It’s A Beatle World, but I can’t imagine more than a few thousand copies were sold. Whatever its sales, they weren’t enough to save Swan: The label went belly up in 1967.

Regardless, It’s A Beatle World is an interesting novelty for your Beatles loving friend, and it will only set you back about ten dollars. Happy hunting. 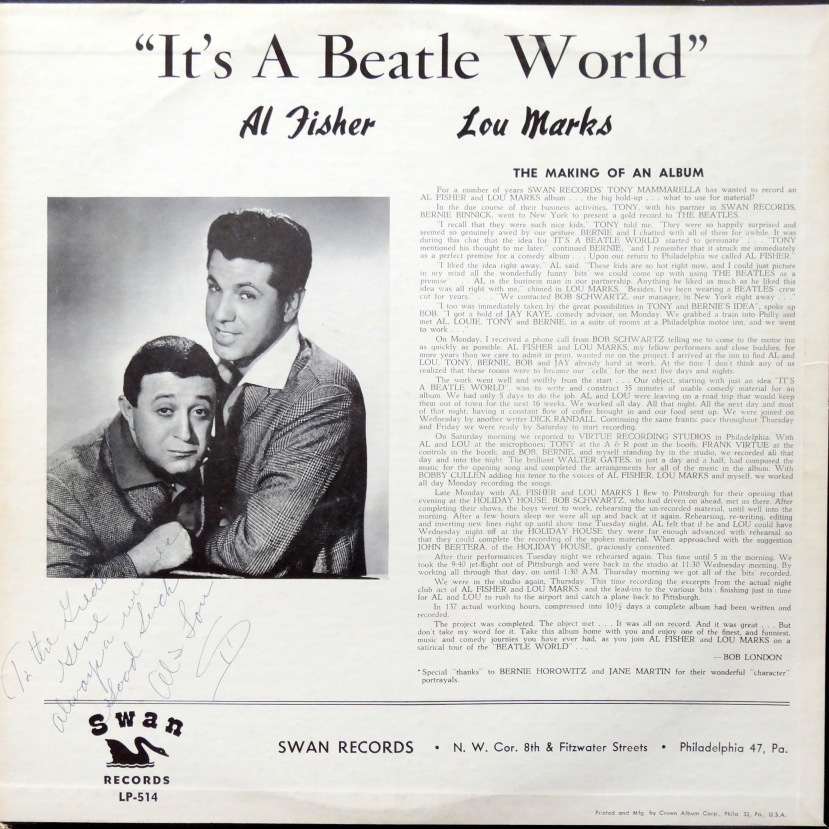 Tagged as: Beatles, Fisher and Marks