When Machines Replace You Will You Still Be Human? 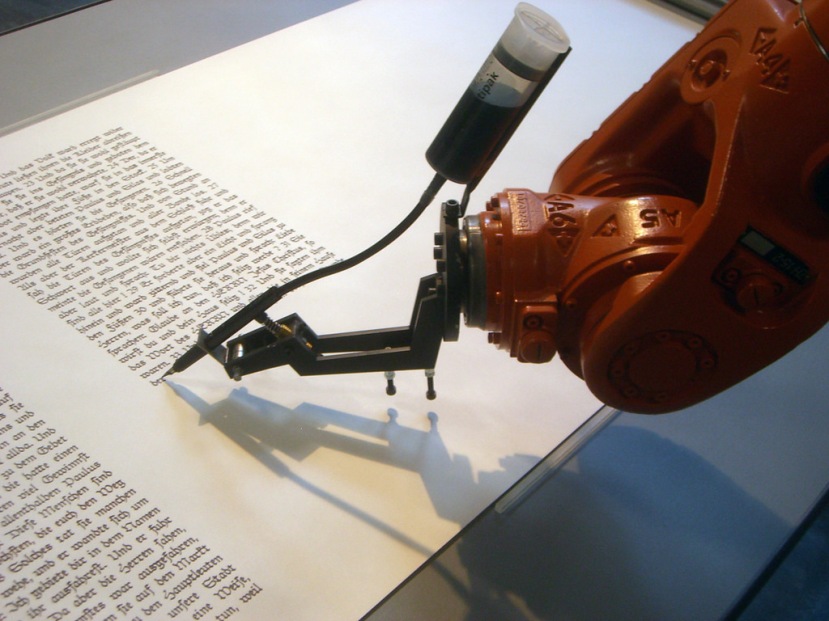 My writing gig is in danger of being overtaken by a robot.

The Week recently ran a piece by Becca Stanek entitled “The Rise of the Robo-Writers.” At least I think it was by Stanek, and at least I think she is a human. It’s altogether possible that both Stanek and I are just artificial intelligence churning out online content.

The gist of Stanek’s story is that the machines are writing stories now–850 of them for The Washington Post in the last year alone. We’re not talking about nuanced think pieces or in-depth journalism here, but rather simple, dry reporting on topics such as finance and sports scores. Quantifiable things. Topics suited to algorithms. That’s where automation begins, with the simple tasks.

While software generating a simple news story is hardly a Terminator in a leather jacket and Ray-Bans, the notion of robo-writers concerns me. There are the social implications: Have we learned nothing about the manipulation of the populace via fake news? Can we really trust computer generated content? What’s to prevent the programmer behind those algorithms from unleashing malice rather than generating accurate market results in a news-style article?

And then there are the personal implications, of which there is one: What about me?

Technology has been encroaching upon my chosen medium for years, but mostly in the form of auto-generated clickbait and the ubiquitous grammar checker. While the latter is a useful tool, a grammar checking robot wrings all of the personal style out of one’s writing. Imagine Celine without his ellipses, Vonnegut without his sentence fragments, Twain without his dialect. Imagine the beige monotony of a literary world governed by Microsoft Word.

But I’ve never feared that my purpose as a writer would be challenged by the machines. Sure, an auto plant can be automated. Of course a robot can vacuum my living room. The arts, though, those are sacrosanct. Those require a human.

Turns out not so much. Artificial intelligence can generate visual artworks that humans prefer to man-made works, and I’m not just talking CGI vs. hand painted animation cels. (Note: My grammarian robot overlord wants me to change that word to “cells.”) Popular music has been reduced to an algorithm, though granted it was always pretty formulaic. It’s only a matter of time before CGI and AI combine for the first entirely non-human actor since Charlie Sheen. Writing inevitably will be just another item on the list of tasks that machines do better than people.

That’s a long list, and it grows longer daily. When we were kids, my big sister dreamed of someday being a grocery store cashier. All those buttons on the cash register, that keen memory for produce prices–my big sis marveled at the cashiers’ wizardry. Today that job has been reduced to “arm that waves items over barcode scanner,” a task so simple that stores increasingly demand that we do it ourselves. Eventually even that step won’t be necessary.

Driving as a vocation is in its death throes. Driving a truck or a taxi always seemed like a safety net career option to me, but driverless vehicles will claim those jobs soon enough. Flipping burgers was an even more reliable last resort gig, but that’s nearly automated, too. Even war is increasingly fought by drones and robots: It’s been nearly 20 years since two human pilots faced off in an actual dogfight. And then there’s the Roomba bumping against my feet while I sit on my couch not vacuuming.

Machines are efficient. Machines don’t have families, don’t have bladders, don’t need lunch breaks. Their computational powers exponentially outpace ours. Provided they are operating correctly, machines do not make mistakes. Once they’re capable of making up stories and fucking there won’t be anything that machines can’t do better than humans, so what becomes of us?

We like to believe that human societies are different, and they are in the sense that they invented lawn darts and Flex Seal®, but essentially human society is just a giant ant hill. It’s all just a matter of how far back you pull the camera. Here, take a look:

All of those little ants on their way to somewhere to do something. What happens when the something is done by machines instead? It’s no mystery: Take a look at Detroit. Look at the entire Rust Belt, for that matter. Tour the abandoned textile mills dotting the American southern landscape, after you visit an ATM, of course.

“Those are low quality jobs,” we’re told. “Those folks are now free from their drudgery. They can pursue high quality jobs.” Things rarely work out that way, though. If the job for which you’re qualified is sticking Twinkies in a box, losing your gig isn’t going to free you up to become a nuclear physicist.

This has always been those other people’s problem, namely the poor and the unskilled. If they didn’t want to be replaced by machines they should have applied themselves! Go to college! Stop being lazy!  But it won’t be too much longer until its machines all the way up and turtles all the way down. There’s no job on the hill that cannot be automated given time and resources, even CEO. Even writing, apparently. “But someone needs to design, build, and maintain the machines” sings the chorus, but artificial intelligence and robotics will bridge that gap. Machines all the way up.

So what will happen to us when our colony collapses? Who knows. We might devolve into Thunderdome, or maybe we’ll be plugged into the Matrix. Maybe we’ll receive the fabled universal income and lead lives of leisure like Jetsons characters on the dole.

The most likely outcome is that we’ll behave a bit like any other domesticated animal that finds itself free. A cat doesn’t stop being a cat when it’s no longer a pet. It simply indulges its cat nature. Perhaps a better example is the wild mustangs that roam the western states, domesticated horses and their descendants liberated from their chores for the human colony, roaming and foraging and reproducing as their horse nature dictates.

It’s been a long time since we lived as humans rather than ants–10,000 years at least. We’ve long forgotten how to live without a job, without a daily task analogous to bringing bread crumbs back to the anthill. Work is the underlying organizational principle of modern civilization. Leaving the work to the machines will wipe out the colony if we don’t remember how to be humans again.