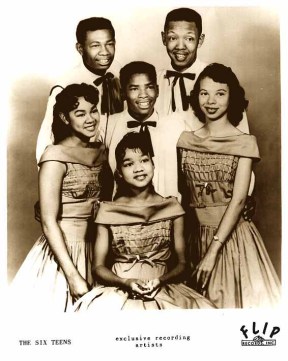 On November 10, 2011, lung cancer got the best of doo-wop legend Darryl “Cappy” Lewis.  You’ve never heard of him?  Neither had I until I cracked open The Sacramento Bee and read Robert D. Davila’s obituary.  I couldn’t believe that an eyewitness to so much music history had been living just miles away from me all of these years and I didn’t have a clue — just your local gas and electric man who happened to cut a million seller as a teenager and was Charles Mingus’s nephew.

Here’s a Cappy Lewis career overview for you, but don’t stop here.  He made a lot of beautiful noise during his half century as a musician, and a bunch of it is out there on the intergooglewebtubes waiting for you.

“A Casual Look,” the Six Teens:  Cappy sang bass in the Six Teens, his first successful band.  They played on the same bills with many legends of the Golden era: Fats Domino, The Coasters, Sam Cooke, The Righteous Brothers.  This was their big hit, making it to number 25 on the charts back in 1956.  Sanity check:  1956 was the year Elvis broke.  Think about that.

“Send Me Flowers,” the Six Teens: In 1957 the Six Teens were playing Hawaii with Frankie Avalon.  This song was such a big hit there that they got top billing over Frankie.

“Uncle Sam’s Man,” The Elgins:  This was Cappy’s next group, formed in 1960.  The Elgins were still touring the oldies circuit today.  Their website states that they were looking for bookings for 2011-2012.  He wrote this cut, which also was their biggest hit.

“One God,” The Truth Messengers:  This was Cappy’s gospel band, and “One God” was his personal favorite:

“One God,” The Truth Messengers

“Yes We Can,” Cappy Lewis:  Best I can tell this is Cappy’s last cut, released in time for President Obama’s inauguration.  Shades of Marvin Gaye’s “What’s Going On” for a new era.

Getting it done for fifty-five years.  That’s what it’s all about.  Well done, Cappy.  Sorry I didn’t get to tell you that before you were gone.