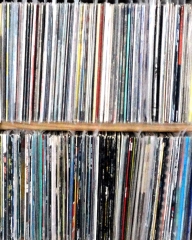 An alert reader and good friend I’ll never meet brought up classic rock radio recently.  I’m paraphrasing here, but he mentioned that in the good old days of radio — say, 2005, for example — programmers would play the same damned songs until they were so completely fucked out that we’d rather jab pens in our ears than hear them again.  Classic rock radio still exists, of course, but now we have on-demand services ranging from iPods to Spotify that shield us from thrice daily repetitions of “Lay Down Sally.”

But here’s the thing:  The bands whose reputations were destroyed (or made, depending on your point of view) through saturation actually deserve their praise.  Here are some cuts that never get radio play, never get licensed for commercials, and never show up in films (except for Wes Anderson movies, maybe), and may restore your faith in the rockosaurus.

“The Bewlay Brothers,” David Bowie.  You’ve heard “Changes,” “Let’s Dance,” “Fame,” and “Space Oddity” enough for one lifetime.  Try this bit of strangeness for a change.

“Bron-Y-Aur Stomp,” Led Zeppelin.  “Stairway To Heaven,” “Immigrant Song,” “Black Dog.”  Zep were big noisy cock rockers with a Tolkien fetish, if you boil them down to the songs you’ve heard a million times.  But their catalogue is full of funk, country, and acoustic nuggets like this one.

“Naked Eye,” The Who.  “Baba O’Riley,” “Won’t Get Fooled Again,” “Who Are You.”  Yeah, I know.  You’ve heard the same Who songs so many times that you don’t even hear them anymore.  “Naked Eye” has everything — the loud/soft dynamic, Pete and Roger swapping verses, and lots of angry power.

“You Know My Name Look Up the Number,” The Beatles.  Maybe the only Beatles song you haven’t heard to death.

“Ain’t No Fun (Waiting Round To Be A Millionaire),” AC/DC.  It’s true — AC/DC made music other than “TNT,” “Highway to Hell,” and Back In Black.  Occasionally one of their songs even sounds different.  Bon’s story song about life as a rock star likely was saved from overexposure by its length.  A tasty cut.

“Chiquita,” Aerosmith.  From Night In the Ruts,  one of their most reviled albums.  Cool song, and it isn’t “Dream On,” “Walk This Way,” or one of those creepy overproduced joints they made during the ’90s.

“Sheer Heart Attack,” Queen.  I don’t know why radio didn’t play this cut to death, but I’m not complaining.  One of the many jewels in an amazing discography.  Or you can listen to “We Will Rock You/We Are the Champions” again, your choice.

Do you have a favorite deep cut from an overplayed artist?  Lay it on me, I’m listening.

Postscript:  “James,” I says to myself, because myself is named James, “maybe you’re being a bit harsh on the classic rock radio format.”  So today I took a little drive and turned on the EAGLE/ROQ/ZOO/etc.  During my little trip here’s what I heard:

So no, nothing has changed in thirty years on classic rock radio — literally nothing.

Tagged as: AC/DC, Aerosmith, David Bowie, Led Zeppelin, Queen, The Beatles, The Who