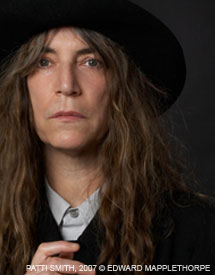 The truly legendary Patti Smith is coming to UC Davis’s Mondavi Center on May 9, 2012.

According to the intergooglewebtubes I have been an admirer of Patti Smith since April 17, 1976, when the great lady appeared on Saturday Night Live.  My little nine year-old brain knew no corollary for her mash-up of poetry, anger, and dirty pre-punk, especially in the middle of a comedy show.  It was like a culture bomb landing on my suburban lawn.

That moment established Patti Smith as sort of my spooky aunt who was too goddamned cool and smart for the rest of the family — the one who was never invited to Thanksgiving because she’d argue politics and religion until she threw the mashed potatoes and walked away with the heirloom silver.

That’s pretty much how I felt for thirty years until her Hall of Fame induction speech.  There she seemed so vulnerable and kind and gracious, like a human who had been through the wars and actually learned from them.

Now I finally get to meet my spooky aunt; well, meet her from orchestra seat L-110.  I plan on counting down the days on the Why It Matters Facebook page with various Patti Smith nuggets.  You can play the home version of the game by joining me on Facebook .

And if you’re in Northern California or willing to travel, you can serve up your own helping of Patti Smith greatness on May 9.  Tickets are still available here.