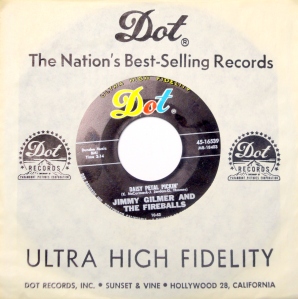 Tres Hermanas in Sacramento, California’s Midtown District is to Mexican food what the Sistine Chapel is to men in drag and funny hats — it just doesn’t get any better.  The place has been a Sacramento institution since the three sisters (thus the name) from Chihuahua, Mexico opened shop.  The location isn’t bad, either.  City Bicycle Works, Rick’s Dessert Diner, one of my favorite used bookstores, and even a vegan restaurant all are within a block of the greatest Mexican restaurant in the history of mankind.  In other words, it’s a very walkable neighborhood, so with a bellyfull of mole enchiladas and cheese and jalapeno tamales I waddled down the sidewalk praying for sweet, sweet death.  What a way to go.

No digestive reaper waited around the corner to put me out of my bloated gastric misery, but that’s not to say that my post-dinner waddle was without surprises.  A small record store cropped up down the street from Tres Hermanas a few months ago — the kind of place that fills the retail space vacuum.  If I happened to find an empty store and filled it with my albums, CDs, posters, and other detrus it would look a lot like this shop, which is to say that it’s my kind of place.  I don’t know if the guys are struggling or just hoping to catch some of the foot traffic in their neighborhood, but on this particular evening they’d made a makeshift dollar bin out on the sidewalk from folding tables and unloved vinyl.   At the front of  the 45 box was something on the Dot label.  I didn’t know what it was, and I didn’t care — I’ll take a shot on a Dot record for a buck.

Back in the days before Universal MegaConglomeraCorp owned everything, the music world was littered with small record labels.  Some have become legendary — Stax, Sun, Chess, Motown — others not so much, at least not outside of music geek circles.  Dot was a Tennessee-based label founded by a guy named Randy Wood back in 1950.  He picked up and moved the business to Hollywood in 1956, and in 1957 he sold the label to Paramount.  For the next twenty years it was a ghost in the record label consolidation Pac-Man game:  Paramount was gobbled up by Gulf and Western, which was gobbled up by ABC, which in turn was gobbled up by MCA, which was gobbled up by Geffen Records.  The Dot catalog is now owned by Universal MegaConglomeraCorp, or Universal Music Group as they are actually known.  I don’t know how to spell the dead Pac-Man sound effect, but I think “blee bloo bloo bloo bloo” should do it.

Anyway, for my buck I got a pretty clean copy of Jimmy Gilmer And The Fireballs’ “Daisy Petal Pickin’,”  a number fifteen hit for the band in 1964.  It’s a fine enough cut, but given that 1964 was the height of the British Invasion I can see how this track has gotten lost in time.  Fortunately their 1963 number one “Sugar Shack” has fared better in that context.

I did a little poking around on the intergooglewebtubes and was surprised to find that The Fireballs are still active.  If you happen to be in Albuquerque, New Mexico next month you can see them live — go here for more information.

And while you’re browsing see if you can find a copy of volume 5 of the That’ll Flat Git It CD series, which compiles  some of Dot’s rockabilly gems.  A lot of them are, oh, let’s say “indebted” to the styles of other artists, but that’s what makes them fun.

Not a bad night out in Midtown Sacramento. Tres Hermanas and a deep cut?  That’ll flat git it any day.