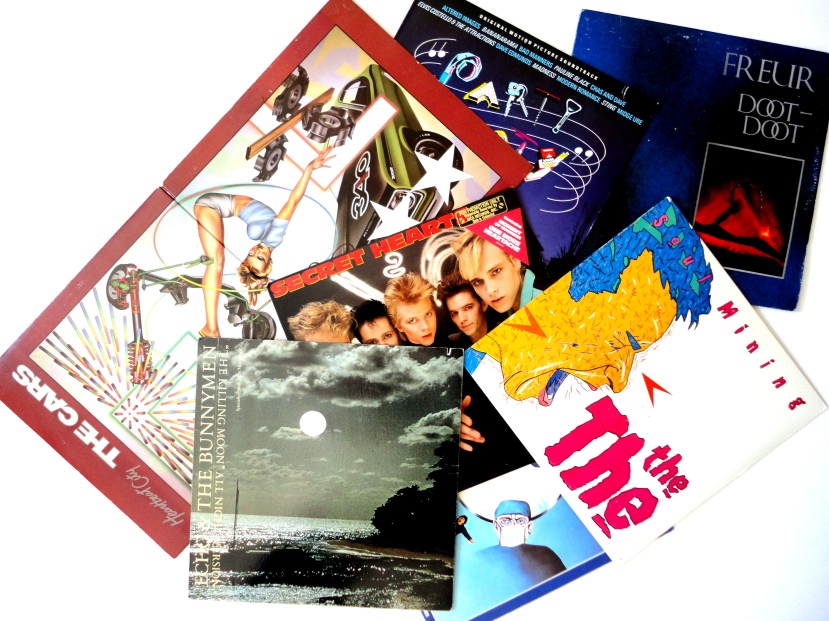 Steve The Manager’s office was gone, buried beneath piles of promotional records so deep that he could barely fit behind his desk.  He didn’t, really.  Steve The Manager slumped into his desk chair and the records filled in around him like quicksand.

“I think it’s time to have a promo party,” he said.

“When the promo pile gets too deep I like to have a little party and let you all pick out which ones you’d like.”

“Why don’t you just let us come back here and do that?”

“That wouldn’t be very fun, would it?  It’s nice to get together outside of work now and then and blow off a little steam.”

I have been in the labor force since I was fourteen years old, and virtually every boss I’ve ever had thinks spending unpaid hours with coworkers is a perk.  Just my little way of saying thanks.  What I’ve learned over thirty years of employment is that there are only two acceptable ways for an employer to show appreciation:  (1) money; and (2) time away from one’s coworkers.

And records.  Steve The Manager was sitting on an easy two thousand albums and  twelve-inch singles, and probably three hundred 45s.  The opportunity to dig into that pile of vinyl was the record geek equivalent of finding a golden ticket.

“What are y’all talking about?” Alex asked, and he punched his time card.

“We doing it at your apartment again?”

“Next Saturday?  Spread the word.”

“Shouldn’t you ask your parents before offering their house?”

“That’s very kind, Jim, but why don’t you ask them first?”

“Okay.”  My evil plan was coming together.  My parents would be out of town that weekend, so permission wasn’t an issue; besides, if they found out I’d simply tell them that Steve The Manager was there.  A manager was just a parent with a name tag.  Most importantly those two thousand pieces of vinyl would be at my house, which presumably meant that I would get an exclusive sneak preview.

The next afternoon I lied to Steve The Manager about talking to my parents.  “Okay,” he said.  “If it isn’t busy out on the floor you and Dan can start clearing these out of my office.”

“Where should we put them?”

“Set them up out here in the back room so that everybody can see what we have.”

Damnit.  Dan and I were in Wonka Land flipping through the stacks as we moved them.  “Oh my God,” Dan said.

“Echo and the Bunnymen, Ocean Rain.  This is mine,” he said.

“Doesn’t work that way,” Dan said.  “We go by seniority.  Alex gets first pick, then Jeff, Dee Dee, Chuck, Sean, me, Johnny, Carrie, and then you.  And since only you, me, and Johnny like new wave it’s mine.”

For the next week I found every reason I could to hang around the back room and eavesdrop as my coworkers flipped through the promos.  We broke down into distinct groups:  the Heartlanders, who were after the Bruce, Willie, and Johns (Cafferty, Prine, Hiatt); the Popsters, who gunned for Madonna, Prince, Cyndi Lauper, and Huey Lewis; and the New Wavers, who coveted The Cars, The Thompson Twins, and Echo and the Bunnymen.  Sadly the R&B remained as unloved as a Charlie in the box, which tells you all that you need to know about Camelot Music’s celebration of diversity circa 1984.   The competition for my picks was minimal but I was deep in the rotation.  Anything could happen on party day.  I needed a backup plan.

A few days before the party I asked Steve The Manager if I could start hauling home the promos.  “It will be easier if I move a little everyday instead of all of them at once,” I said.  He took the bait, and I didn’t even have to lure him to my secret volcano lair for a round of torture.

Once home I sorted the albums into their respective Heartlander/Popster/New Waver piles, which left me with a huge stack of unknowns.  I divided this pile again using a few immutable truths.  If the album cover showed a:

…then it immediately went into the shit pile.

Next I looked for bands on trustworthy labels like IRS, Slash, Enigma, Rough Trade, and Beggars Banquet.  After that I was down to interesting artwork, cool band names and cool haircuts in that order.  I spent the next three nights at my turntable, spinning this pile in search of buried treasure.

The The’s Soul Mining caught me immediately with the opening beats of “I’ve Been Waitin’ For Tomorrow (All Of My Life),” which remains my favorite cut from the band’s entire catalog.  Freur’s Doot-Doot was strange enough to hold my interest.  Soundtracks like They Call It An Accident and Party Party contained nuggets overlooked by both Dan and Johnny.  Secret Hearts appeared to be a reconfiguration of The Rockats, whose “Make That Move” was a favorite of both Lee G. and me.

The real surprise in the pile was a 12″ single of Echo and the Bunnymen’s “The Killing Moon” with a live version of “Do It Clean” on the b-side.  Obviously Dan didn’t see it or he would’ve rubbed my face in it for a week.  Or maybe he did see it but he was hoping I didn’t so that he could pick it up in the second round.

I committed my picks to memory, practiced pulling them disinterestedly from the stacks:  Oh, this looks interesting.  I guess I’ll give it a try.  I reshuffled the whole mess and tucked Ocean Rain close to the front where Dan could find it.  I slid the “Killing Moon” twelve-inch into the middle of the pile and hoped for the best.

Just to be safe I placed a copy of The Cars’ Heartbeat City not too far after Ocean Rain for Johnny.  He’d stolen a copy a few months earlier by slipping it into the trash on a night that he had garbage duty and then fetching it from the dumpster after work.  My hunch was that we would go for it anyway in an effort to cover his tracks.

Saturday arrived and so did my coworkers, along with the beer that we did our best to conceal from Steve The Manager.  We headed down to the makeout basement, which long ceased serving that forbidden purpose.  Both of my sisters were married and gone, and all of my making out happened either in cars or in Sherri’s bedroom.  Now more than anything the basement was my own floor of the house for the few hours per day that I was home — my own little world separated by a stairwell and a door.

My mother treated with great respect that last twelve feet connecting her to her last child.  Before opening it she would pound on the stairwell door, then yell, “I am coming down the stairs.”  This was followed by an exaggerated stomp down the stairwell.  When she reached the last tread she’d scream, “I am coming down the hall.”  By the time she reached my bedroom contraband was concealed, clothing was restored, and a plausible cover story was in place.

The makeout basement itself remained unchanged since the days that Mike, crown prince of The Guys In Black Tee Shirts Who Jam, used to bring over his 8-Track collection to entertain me while he entertained my sister.  The walls still bore the same horrid, gray, faux-wood paneling with exception to the one bearing a wallpaper mural of an autumn forest and all of the brown and orange that implies.  The back wall was dedicated to the massive bar that my father built from the same gray paneling, behind which still idled the beer refrigerator that Ricky Brent and I emptied years earlier.  My parents’ console stereo rested against one wall, directly across a console television with no horizontal hold and an upright piano.  The only furniture was a small couch reupholstered with burlap.

I dragged down a few kitchen chairs, lined the promos up in several parallel rows streaming from the wallpaper forest, and away we went.  As expected the Heartlanders took one each in the first round of albums with work boots or cowboy hats on their covers.  Dan bolted straight for the Ocean Rain, and then it was Johnny’s turn.

“Heartbeat City, rad.  I’ve been wanting this.”  Everyone but Steve The Manager smirked.  Carrie was up next, clearing out a Rockwell or some similar crime against humanity.

“It doesn’t have a live version of  “Do It Clean.”

“All right, all right,” Steve The Manager said.  “Alex, keep us moving.”

Rounds 2, 3, 4, 5.  My eyes rolled back in my head like a great white on a feeding frenzy, picking off my Freur, The The,  Midnight Oil, etc., while Dan and Johnny feasted on the Howard Jones, Style Council, and General Public.  Occasionally Steve The Manager hopped in and grabbed a jazz album.

I realized Carrie was missing, so I excused myself and looked for her.  She was upstairs standing in front of the open refrigerator, slugging kirsch straight from the bottle.  “This is delicious,” she said.

“What are you doing?  My mother makes cakes out of that.”

“What the hell kind of cake has cherry brandy in it?”

“Just put it back.  Come on back downstairs.”

She wasn’t the only one who’d burned out.  When we got back downstairs we found groups talking and laughing, completely ignoring the balance of the promos.  Steve The Manager was the first to leave, followed by Dan.  Alex and Johnny arrived together but left separately — Alex with the kirsch-infused Carrie and Johnny following in her car.  Soon I was alone, just me and the several hundred remaining promos.

Sounds like a dream come true, right?  You obviously don’t have hoarding tendencies and a copy of Barbara Streisand’s Yentl that you’ve had to drag all over the country because, you know, you never know when you might need it.  What if a gay friend drops by and questions my homo-friendly bona fides?  What if the Library Of Congress burns down and they need fine citizens like me to help them rebuild their collection?  What if someday I realize I’m a transvestite rabbinical student?

But I’m medicated now, time for Barb to move on.  Do you want it?  I’ll pay you a dollar, and I’ll even throw in a signed copy of this story.  Just don’t steal my Heartbeat City.