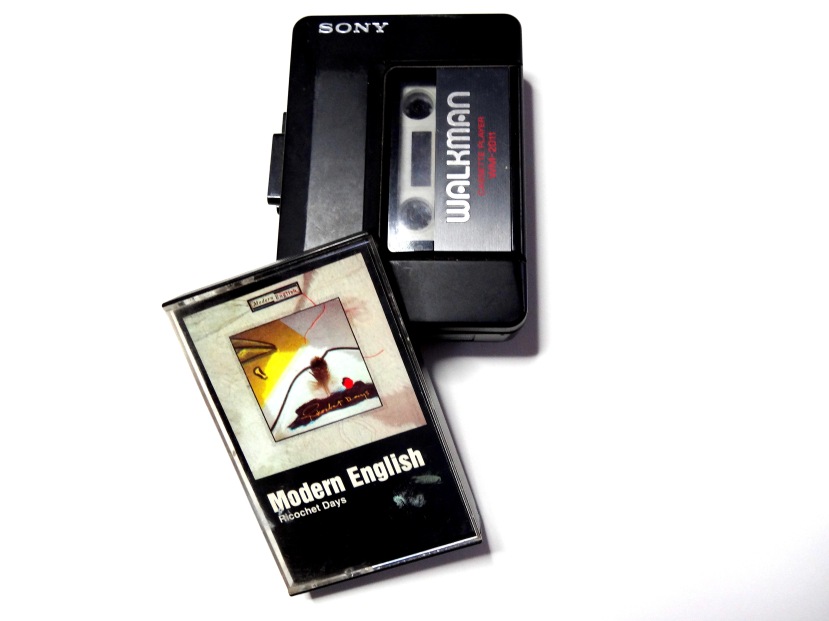 You probably know Modern English as the “I’ll Melt With You Guys,” which makes sense.  That is one of the most iconic songs of the eighties, a decade littered with tasty one hit wonders.  Also, Rockwell.

But my go-to Modern English disc is 1984’s Ricochet Days, an album that barely cracked the top 100 on the American charts but hit me just right.  Ricochet Days stands up better than a lot of the synth albums of the era.  The production doesn’t seem quite as dated, though the boom-boom-bap sometimes triggers my Molly Ringwald dance.  I think what first hit me about the album was the bass, mixed loud and proud.  Great tone, too.

Songs like “Rainbow’s End” and “Hands Across the Sea” were well-crafted and hold up to repeated listening, but honestly it all comes down to the title track, a melodramatic climbing song that peaks with the repeated lyric, “Someone called your name but your name was a stranger to you.”

“Ricochet Days” was the right song at the right time.  Some art is like that.  Read The Bell Jar, Catcher in the Rye, or On the Road at the wrong time and they are just books, but catch them at the right moment and they are divining rods.  That opening clarinet riff building to a frantic chant of  “it doesn’t matter, doesn’t matter” — bombastic on a bad day, perhaps, but a road map to my psyche at that particular time.  At least I thought so.  I even tuned my guitar to that song for a few years for some unspoken reason.

Anyway, Christmas, he said, lacking a segue.  Christmas is retail’s biggest season, and Steve The Manager staffed Camelot with seasonal employees  in skinny ties, buffalo plaid, and popped collars.  Johnny’s girlfriend was among them, a petite girl with short blond hair and bright blue eyes; a heart-shaped mouth and a small dusting of freckles on the bridge of her tiny nose.  She was as close to perfect as any girl I’d ever met, and she was with the mulleted goofball who wrapped his necktie around his head like a bandana.

Having Johnny and Jody on closing shift together often was like watching mimes performing one of those pre-match big time wrasslin’ interviews.  Alex and I tried to disappear — he into counting out the register, I into straightening the cassette wall — while Johnny rage-vacuumed (like punch dancing but with a Hoover) and Jody jammed albums into the bins with extreme prejudice.  Sometimes they verbalized their arguments rather than taking it out on the inventory and appliances, but inevitably at the end of the night they left together in Johnny’s bad ass Mustang.

How Jody and I ended up on the other side of the glass one evening I’ve long forgotten but there we were, side by side, in the empty mall.  Behind the locked glass doors Alex counted the till and Johnny vacuumed, tie wrapped around his head.  Jody waited for him and I simply waited: waited to catch her scent in the still air, waited to see her delicate hand touch her heart-shaped mouth when she laughed.  I waited for those clear blue eyes to see me.

“What are y’all doing tonight?” I asked.

“I don’t know.  Probably go to Johnny’s house and listen to Duran Duran,” she said.

“That boy ain’t right,” I said.  There it was — her hand covering her little mouth, those blue eyes twinkling as she looked at me and laughed.

“Yeah.  Me and Alex are hanging out.”

“Yeah, girls like that.  I’m sure that’s why Johnny likes Duran Duran.”

Her hand shot to her mouth again.  “You’re terrible,” she said.

“What do you see in that guy?”

I wanted to touch her, but she was an Untouchable.  Just a hand on her cheek, just a brief moment of that soft skin against my palm.  Maybe she would lean into my hand, close those pretty eyes and tie that ribbon of a mouth into a contented red bow.

“I don’t know.  You seem like something is wrong.”

“Well she’s an idiot and she doesn’t deserve you.”

“You need somebody who appreciates how smart and funny you are.”

She looked deeply into my eyes, head slightly cocked.  Words were stuck between her lips.  Her eyes darted toward the vacuuming goofball, then back to me.  “You should meet my friend Pam,” she said.

After Christmas Jody was gone but she lingered in the humid Piedmont air, no matter how hard I tried to forget her.  I would find her again someday, I knew it.  I’d find her, no matter where, no matter how big the crowd.  She smelled of hurricanes and peach orchards.