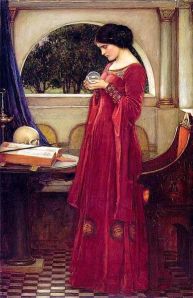 Predicting the future is a common theme in music, and not just with the Mael brothers and those “Future’s So Bright” chuckle heads.   Some are optimistic, others pessimistic.  We’ll be anything from merpeople to robots, or at least in love with robots.  Or annihilated by them.

Here are some songs about the distant future, some of which is now in the past:

“1983…A Merman I Should Turn To Be,” Jimi Hendrix.   Nobody embraced the future with the psychedelic beauty of Jimi.

“1984,” David Bowie.  Bowie went to the future well many times, but the Diamond Dogs album was a complete dystopic concept album set in Hunger City so it gets the nod.  Originally a musical adaptation of the novel 1984, Orwell’s widow refused to sign off.  This would’ve been the coke-fueled title track.

“1999,” Prince.  Prince doesn’t like the Youtubes, so enjoy this version by The Revolution sans their diminutive leader.

“2000 Man,” The Rolling Stones.  KISS covered this on the Dynasty album with Ace Frehley handling the vocal.  Know what?  I’ll thing I’ll include that one, too, so you can decide which flavor you prefer.

“Robots,” Flight of the Conchords.  Harrowing, chilling, disturbing.  Take your hands off me you damned, dirty robot!

“22nd Century,” Nina Simone.  Any Nina fans in the crowd?  I have my moments.

“Welcome to the Future“ Hawkwind.  When I’m jonesing something kind of proggy I often whip out the Hawkwind.  It still blows my mind that Lemmy is an alumnus.

Okay, take off your jet pack, relax in your silver tunic, and tell me your favorite future songs.  I’m listening.