On My Turntable: Heart – Fanatic 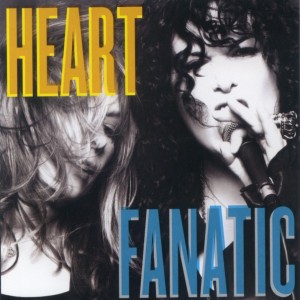 With exception to a dark period in their catalog that I choose not to think about, Heart has long been one of my favorite bands.  Of the thousands of groups who modeled themselves from Led Zeppelin’s template, the Wilson sisters have forged the most consistent and unique sound (again, with exception to the welding mask years).  Nancy’s hooks are big and Ann’s voice is even bigger.  Their music is heavy, melodic, and sexy.

I hesitate to use that last adjective, as I imagine it has been gum on their shoes for nearly forty years, but it’s the right word.  Heart’s best songs let you believe that you fuck much better than you really do because they do half of the work for you.  Think of the slippery groove of “Magic Man,” the pounding “Barracuda” riff, the tempo change in “Crazy On You.”

This is exactly how their latest album, Fanatic,  opens, with a title cut that makes hips grind and otherwise sane people scrunch their faces into duck-lipped mockeries of sexiness.  The mix is contemporary, but somehow “Fanatic” sounds like classic Heart:

Obviously a huge percentage of that magic is Ann Wilson’s voice.  Unlike her male contemporaries, Wilson’s instrument gets better with age.  She may have started her career as a Robert Plant wannabee, but her pipes are still standing and his?  Well, not so much.  “Don’t try to tell me the world is changing,” she sings, and in some sense it isn’t. There’s always room for crunchy riffs, wailing divas, and rhythms that grab your hips and grind.

I’m so blown away by the power and consistency of Ann’s voice — even during the era of which we must not speak — that I checked Rolling Stone’s list of 100 greatest singers to see where she ranks.  She doesn’t, but Lou Reed, Thom Yorke, and Kurt Cobain do, which is all you need to know about Rolling Stone these days.  I have no quarrel with any of these artists (like them all, actually), but ranking them above Ann Wilson in the voice department  is a bit like saying a broken accordion is superior to a Steinway.  I guess it’s better to be hip than to be honest.

Sarah McClachlan guests on the track “Walkin’ Good,” where she pistol whips a puppy to the Auto-Tuned masturbatory grunts of Michael Vick.  I’m kidding, of course.  He isn’t Auto-Tuned.  “Walkin’ Good” is a middle of the road track, nothing really to complain about:  the singers’ voices blend well, and Ann’s flute adds a nice color.  I’ve long been a fan of Nancy’s acoustic playing and it is pleasant enough here.

But mostly the track is a cool down before “Skin and Bones,” which sounds like Don Henley’s “All She Wants To Do Is Dance” but listenable.  If there is a god this will become the new de facto stripper song, forcing “Cherry Pie” into retirement:

“Million Miles” is Heart mixed with Tangerine Dream, which is not a bad thing.  It might not be traditional Heart, but Ann gets to stretch that big voice of hers.  The drums are big, too, with heavy fills that shake the fenders of my ridiculous midlife crisis car.  The track is spacious, employing the loud/soft dynamic that will provide lighting designers with easy cues and crowds ample time to bounce and pump their aging fists.

Perhaps the most fascinating thing about Fanatic is trying to differentiate between chicken and egg.  Led Zeppelin influenced Heart who influenced countless acts who in turn have had several decades to influence Heart.  Does a cut like “Pennsylvania” sound like a Jeff Buckley track because they leaked into his songwriting or vice versa?  Who knows, but it’s a beautiful, haunting song:

Similarly, “Mashallah” is the greatest Soundgarden track you’ve never heard.  Heavily indebted to Zep this is the most “classic rock” track on the album, with a clean, heavy riff fighting a string section for dominance.  Crank it, stab it, and steer, and pay no attention to those millennials in the Scion who are laughing at you.  Not that that happened to me.

They probably wouldn’t like “59 Crunch” either, which is more great riff rock.  To my ear this is a great place to close the album, but the standard version ends with “Corduroy Road.”  The song isn’t much of an outro, and honestly feels like filler.

The deluxe edition includes another three tracks, but unfortunately they don’t appear on my review copy.  Let’s go ahead and assume those bonus tracks are the business — no reason not to, the rest of the album is solid.

Bottom line:  If you broke up with Heart after Bebe Le Strange but only because the material during The Dark Period That Shall Not Be Named wasn’t worthy of your beloved Wilson Sisters, now is the time to get back on the bus. Fanatic is going to remain in your power rotation for months, but please: no duck lips or other sex faces while listening in traffic.