Why It Matters to Dennis Coffey 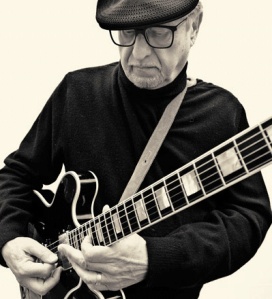 Dennis Coffey has long been one of my favorite guitarists.  He’s one of yours, too – you probably just don’t know it.

As a member of Detroit’s legendary Funk Brothers, Coffey played on more Motown tracks than he can count, and that’s just a fraction of his session work.

In 1971 Coffey recorded the classic “Scorpio,” one of the coolest, funkiest cuts ever laid down.  The year prior he produced and played guitar on another classic: Rodriguez’s Cold Fact.  Don’t sweat it if you haven’t heard of Rodriguez — that’s actually part of his story, at least here in the United States.  The good news is that you can get caught up by watching Searching For Sugar Man, which features Coffey and might be playing in your local art house right now.  The documentary is in the hunt for an Academy Award this year.

Coffey is still very active.  He still gigs — quite often around Detroit, in fact — put out some new music in 2011, still produces and plays sessions, and published a fascinating memoir back in 2004.

So yeah, if I could sit down for a beer and a long talk with any musician I’d pick Dennis Coffey, but I can’t so we had a shorter, beer-less chat via email:

Why It Matters:  Do you have any idea how many records you’ve played on? During the Motown era alone you must’ve played on more than you can count.

Dennis Coffey: I do not know how many records I

played on but I do know that I was on three songs in the top ten and ten songs on the top 100 in Billboard magazine for one year straight. That included Motown, Hot Wax, Invictus, Wilson Pickett, the Dramatics and George Clinton.

At Motown we recorded one song an hour. I did six hours a day at Motown plus three songs in the evening at HDH Tower Studios. We did that about five days a week.

That comes out to 30 songs for Motown and 15 songs for HDH usually every week.

WIM: You’ve been out front as a successful solo artist and in the back as both a producer and a session player.  I’m sure it’s all good, but where do you prefer to be?

DC: My main focus now is playing live concerts and recording as a guitarist. I also like producing and doing sessions.

WIM: Can you tell us a little about working with Rodriguez?

DC: When we signed Rodriguez to record his first album, Cold Fact, he was so shy he would perform facing the wall with his back to the audience.

Because of this we also recorded his first four songs with just him singing and playing rhythm guitar, and then we built a band around him. I played lead guitar and bass on some of those songs.

Once he was more relaxed, we brought in the entire rhythm section to record with him. Mike Theodore and I always believed in his incredible talent.

WIM: Are there any players out there you’re keeping your eye on?  There’s a lot of music out there, which seems like it should be a good thing, but it’s a hell of a lot harder for music fans to find a current Funk Brothers without a travel guide, if you know what I mean.

WIM: Why does music matter to Dennis Coffey?

DC: Music has always mattered to me. My mom’s side of the family was very musical. My aunt could play difficult piano pieces with no mistakes at the age of 93. I played with Les Paul when he was 93.

My mom also sang and played piano. She told me I could name every song I heard on the radio when I was two years old. I was always passionate about guitar. I used to practice eight hours a day on summer break from school. I still practice two hours a day and play out at least one or more nights a week here in Detroit when I am not on the road.

You can keep up with Dennis Coffey, hear some clips, and check out a fraction of his amazing discography at:  www.denniscoffeysite.com

I can’t let you leave without a taste.  Here’s the official promo clip from his last album, 2011’s eponymous Dennis Coffey: