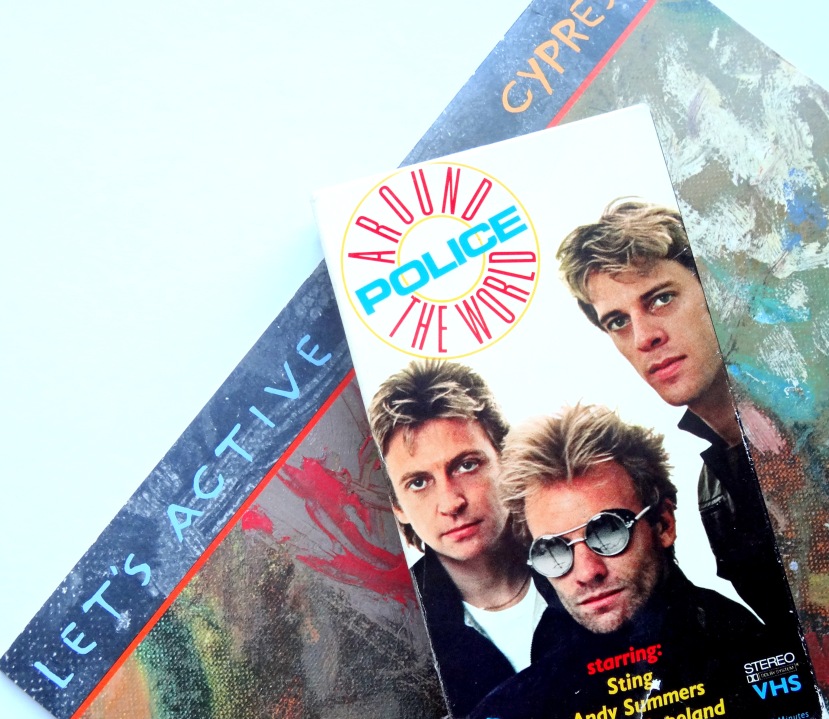 I’ve never been in a band, never had that “get in the van let’s go catch the flying panties” band experience.  There’s always hope, though.  Any day now I might hit a Stryper yard sale and commit to hanging my doughy, hairy belly over the waistband of a pair of yellow and black spandex pants.  Hello Cleveland!

No, I’ve always been a closet guitarist, playing in solitude, but in the summer of 1985 I had my night.

My parents left the country for a couple of weeks, and if I learned anything from ’80s teen sex comedies it was that when your parents leave you alone in the house you have to throw a party.  Also, that if your dad is a T.V. repair man he has, like, the ultimate set of tools that you can use to fix a linebacker’s destroyed Camaro.

When you’re 18 with an empty house beer and guests kind of take care of themselves.  There was no need for engraved invitations, word of mouth was all that we needed, so Lee G. and I focused instead on entertainment.

“We should put together a band,” Lee G. said.

“We can get Chris to play guitar, and I bet Dan would play drums,” I said.  I imagined us down in my parent’s basement, knocking out covers of “So Lonely” and “Roxanne.”  “I’ll sing.”

“I should be the singer,” he said.

“Do you have a three octave range?”

“Who needs a three octave range to sing ‘So Lonely’?”

“I should be the singer,” he said.

And thus it was decided that I would move over to bass guitar.  The only problem: I didn’t own a bass.  We hopped into Lee G.’s car full of dirty clothes and cassettes and headed down to Smith’s Music House, the half music store/half pawn shop in downtown Spartanburg.

One of my bigger regrets in life is that as a teenager I foolishly passed up the Kays, Silvertones, Voxes, and Mosrites hanging from the walls at Smith’s — the Jaguars and the Mustangs and on and on.  Fifty bucks, a hundred bucks.  It’s an image that still haunts me.  But that’s kids, I guess.  At the time it was all about Strats and Les Pauls, Charvels and B.C. Rich.

Anyway, I had no bass loyalty and I had no money, so I put down a twenty-dollar down payment on a $125 blond Ibanez bass shaped like a Gibson SG.  Now all I had to do was come up with the rest and I was a bass player.

Coming up with a hundred bucks on short notice was pretty much unheard of on a record store salary, and I didn’t have any friends from whom I could bum that kind of cash.  And then a Myrtle Beach bolt of inspiration hit me: airbrush some shirts.

Rich, our new doofus of a manager at Camelot, recently hired a headbanger named Jeff.  He was an easy-going enough guy and he drove a Camaro with not a touch of primer showing anywhere, so I assumed he had some mommy and daddy money or something.

“I’ll paint Nikki Sixx on a shirt for you.”

“You can draw Nikki Sixx?”

“Oh, hell yeah.  I can draw Nikki Sixx so he looks more like Nikki Sixx than Nikki Sixx does.”  This is what’s known in the arts — and this is an art criticism term — as complete bullshit.  I had no idea whether I could paint Nikki Sixx.

That night I stole a promo copy of Theater Of Pain from Rich’s office and copied Motley Crue’s bassist onto a white sweatshirt.  It looked pretty good.  If life had zigged when it should have zagged, I might be writing right now from the back of a t-shirt hut in some beach town.

Anyway, Jeff wore his shirt into the store a couple of days later, I picked up a couple more orders and I was done.  The Ibanez bass was mine.

As soon as I got the Ibanez home I took it down to my father’s shop and filed off the frets, turning an already crappy bass into a really shitty bass.  But I didn’t care.  Sting played a fretless on “Shadows in the Rain” and a couple of other songs, so it seemed like the right thing to do.

We didn’t have much time, so we kept the set list to four songs:  “So Lonely,” “Walking on the Moon,” and “Roxanne” by The Police, and Let’s Active’s “Waters Part.”  I practiced on my own for a few days, following along with my Police Around the World video, trying to get up to speed before band practice started.

A couple of days later Dan brought over his drum kit, Chris showed up with his guitar, and Lee G. picked up a P.A. and a microphone somewhere.  We set up in my basement for our first rehearsal.

“What do y’all want to play first?” Chris asked.

Well someone told me yesterday

That when you show your love away…

I looked up from the microphone.  The guys were staring at me with a mix of confusion, amusement, and horror.  Not only did I not have a three octave range, I didn’t have a one octave range.  My voice was so far from any range that it couldn’t hit a note if it was carried by a guided missile.

That was the end of my singing career, other than one night years later in a Holiday Inn karaoke lounge crooning  “Istanbul (Not Constantinople)” — Munchkin-style.

The bass work was fun, though.  Sting’s bass lines are easy: little accents on the beat, keep it simple, leave plenty of room for Stewart’s drum fills and Andy’s guitar synth aural washes.  We chugged through all three Police songs and they sounded good enough, and then we tackled “Waters Part.”

I don’t know if Let’s Active ever made a dent in your part of the world, but in the South in the mid-eighties Mitch Easter’s band was the business.  They were the connoisseur’s choice:  everybody liked Def Leppard, the cool kids liked R.E.M., and the real music fans were into Let’s Active. Velveeta to cheddar to West Country Farmhouse Cheddar.  Tasty.

Dan was on the beat, Lee G. was in great voice and jangly Rickenbacker, and Chris was holding the whole thing together. All of Boiling Springs marveled at that kid’s musical prowess from the age of twelve or so.  We revered him as the guy, as in Chris is the guy who is going to make it.

Now, Let’s Active bassist Faye Hunter’s part wasn’t some simpleton sort of Sting thing.  She chugged and she walked and she contrasted and complemented.  I couldn’t do any of that shit – I’d only been a bass player for a few days – so I just found the key and ZZ Top’ped it: do do do do do do do –

“It’s not even sort of close.”

“Here, let me show you.”  Chris faced me with his guitar and plucked out Hunter’s bass line.  Twenty minutes must have passed while he taught me that part note by note, and I grew more and more frustrated.

“Okay, but promise you’ll practice it.”

Party night.  The beer and the guests arrived, but mostly the beer.  My parents’ house was packed with every shit head from my high school, Lee G’s and my friends, neighbor kids, whomever.  Andi was there, too, my art room girlfriend.

Southerners are nothing if not gracious, so as host I was offered a beer off of pretty much every six-pack that came through the door. And I’m nothing if not a gracious host, so I dutifully downed each one that I was handed.  Somebody found a pewter beer stein in the dining room hutch and brought it to me.  I carried it around for the rest of the night like a pimp chalice.

The party did what parties do:  It found its own tenor, its own energy.  Things got loud.  Somebody else found my silk Gary Wright “Dreamweaver” scarf and wrapped it around my neck.  The back door’s window shattered.  A drunk stepped in the glass shards.  Another drunk fell over the coffee table.  He was a big boy — Tim was his name.  The whole house shook when he hit the floor.

I followed Lee G. to the basement and strapped on my bad ass fretless bass.  We played “So Lonely,” sort of.  I took several breaks to hit off of my pewter mug.  When the song was over I handed my bass to somebody else and headed for Andi.  I had a girl, a beer, and a really gay scarf — fuck this band stuff.

“Yeah, man.  My mom and dad bought me a new Laser for graduation.”

I kissed Andi one more time and followed Tim to the car, beer stein in hand and scarf in the breeze.

“This is nice,” I said from the passenger seat.

“Thanks.  Check it out.”  Tim stabbed it.  The turbocharger whined and my head slapped against the seat.

“Slow down up here, man.  This is a tight turn.”  He snaked around the hairpin and then opened it up again — seventy, eighty miles an hour through my little country neighborhood.

“You want to drive?”

Tim turned the beast around and went seventy, eight miles an hour in the other direction.  At the last possible second he remembered the hairpin turn, braked and jammed the steering wheel hard left.  We spun completely around and landed in the ditch on the opposite side of the road.  I chugged what was left in my pewter mug.  The rest was on my lap.  The only sound was the budda budda budda of the idling engine.

The rest of the night is gone.  At some point people left, and the next morning I woke up next to Andi.   Maybe a month or two later I saw Chris at a gas station.  “Hey man, we should get together and jam,” I said.

“Yeah, maybe,” he said, but it was obvious he didn’t mean it.

I sold my $125 bass for a hundred bucks to somebody else who couldn’t play and went back to playing guitar in solitude. I had my night, and on a John Hughes scale of one to ten I’d rate it a solid six.   Best 25 dollars I ever spent.