117. Stars Will Fall From Dark Skies 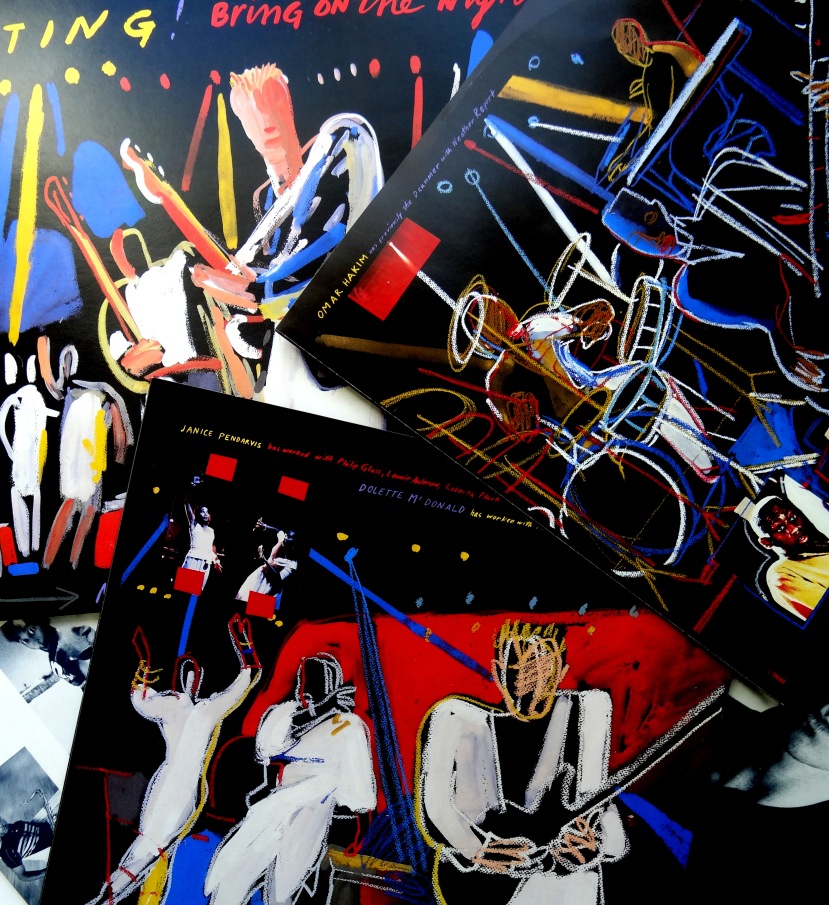 I’ve been pretty hard on El Gordo Sumner over the last couple of years, probably because he makes it so easy with his lutes and his tantric boners.  But like pretty much everything else in my musical history, Sting mockery is a bit of revisionism.  The truth is that I liked Sting.

We all do this, so get that smug look off of your face.  Yeah, I mean you.  I can see that Jewel CD in your closet, and you over there with the hipster beard and the cowboy shirt, I remember your Limp Bizkit tee.

Listen, Sting wasn’t a musical crime against humanity in 1985.  That was still a couple of years in the future.  In ’85 he was still lead singer of the world’s biggest band.  All five of The Police’s albums were mandatory listening, as were their side projects: Klark Kent, Summers/Fripp, the Brimstone and Treacle soundtrack.  Those three guys could do no wrong.

Maybe ninety percent of that was because The Police were that good, but the other ten percent is due to the rest of popular music in 1985 being that bad.  It was the era of Paul Young and Corey Hart, Phil Collins, Lionel Richie, and Kenny Loggins. Huey Fucking Lewis.  Corporate rock in the eighties was slick, pandering, empty.

But not The Police.  They made music for grown-ups that was accessible to kids, no pandering allowed.  They set themselves apart by not adhering to the DX-7 and boom boom bap production of the era.  With The Police you weren’t going to get haircuts and cheesy keyboards; okay, maybe haircuts.

When Dream of the Blue Turtles dropped we true believers were genuinely excited.  The album’s line-up promised to push the analog instruments and grown-up music thing even farther: jazz greats Kenny Kirkland, Branford Marsalis, Omar Hakim, and Darryl Jones.  This band was going to shred.

Lead off single “If You Love Somebody Set Them Free” disappointed, but the guy who wrote “Demolition Man” had an abundance of credits in our good will bank accounts.  The rest of the album did what I expected, exposing me to geopolitical and environmental concerns and introducing me to a pre-fucked out Anne Rice.  No complaints, so when my buddy Matt called me at the record store and asked me to drive to Charlotte on no notice for a Sting show I was thrilled.  His treat, his car, all I had to do was get past Rich, the mulleted mega-manager.

I didn’t know Rich prior to Camelot Music, but I knew who he was prior to Camelot.  He was the weasely little shit who kept a list of unruly kids when the teacher left the room.  He was the asshole with the crease in his jeans; the Eagle Scout, the hall monitor.  The most disorderly thing Rich ever did was fart in the bathtub and sniff the bubbles.

“Come on, Rich.  You have plenty of people here tonight.”

“If I didn’t need you I wouldn’t have scheduled you to work.”

“It’s a free concert!  Music – that’s why you and I both work here, right?  Besides, you know we’ll get a post-concert rush on Sting tomorrow.  Don’t you think you should have someone at the show so that they can talk it up with customers?”

Either he was tired of arguing or I stumbled upon a decent point, because ten minutes later I was out in front, waiting for Matt.

When his Datsun finally rolled up, I was surprised to see his girlfriend sitting in the passenger seat.  He didn’t tell me that this was a third wheel invitation, and from the look on her face he didn’t tell her, either.  She sat like a mannequin, stiff and straight, lips pursed slightly and two little angry slits where her eyes were supposed to be.  And then I noticed another mannequin propped up in the back seat: Matt’s ex-girlfriend.  I shot him the “what the hell were you thinking” glance, and he responded with that “hey, what are you gonna do” shrug.

Charlotte is seventy miles from Spartanburg.  That’s about a one hour drive in a car, three in a Datsun.  The miles passed in a mix of frigid silence and cartoony stupidity from me.  Matt laughed too hard at my crappy jokes, but his girlfriend never cracked a smile.

The ex-girlfriend, we called her Sparky, did what she could with the cards that she was dealt.  We sang along with the radio, made small talk, anything to kill the silence.

Seventeen hours and 63,000 miles later we arrived at the arena.  Our seats weren’t too bad — only one or two area codes away from the stage.  The ladies took the outside seats, leaving Matt and me together in the middle.  This was a severe breach of heterosexual teenaged boy seating protocol, but it was better than Sparky and the new girl tearing at each other mid-show.

Show time was eight o’clock, and right on the hour the curtain opened and there stood Sting and his new band.  No opening act, no introductions, just pop the curtain and start playing.  Brilliant move.  Immediately we knew that this wasn’t a rock concert.

And just as quickly I knew that Sparky was my responsibility for the night.  It was the code of the wing man, even in this incredibly weird scenario.  Sparky and I danced and sang and yelled “whoo!” a lot.

Whoo! was a problem for New Sting.  He was a serious musician now, and the unruly savages shouting whoo! disrupted his “Moon Over Bourbon Street” mojo.  He shushed us until the big shed was as quiet as an abandoned New Orleans street, and then he restarted his Lestat tale.

The highlight of the evening was a stunning reading of Brimstone and Treacle’s “I Burn For You,” with plenty of room for Omar Hakim to show what he could do behind the drum kit. The song was eerie, moody, romantic.

I didn’t know what to do with Sparky.  Every concert date impulse that I had was wrong: wrapping an arm around her waist, kissing her.  The mood was there — the lights, music and adrenaline — but she was Matt’s girl even if she wasn’t.

“Come on,” I shouted, and I grabbed her hand.  We ran from our seats at the back of arena, through the screaming crowd, closer, closer. Past the mixing board and floor ushers and up the center aisle we rushed, Hakim’s bass drum pounding in our chests and stage lights flashing like shooting stars. Sparky’s hand squeezed mine.  It was enough.