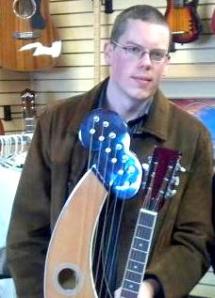 (Previously Adrian was talking about how time mending after knee surgery turned into time dedicated to the guitar.  Those hours led to great refinement in his technique, which led to friends encouraging him to get out in front of an audience.)

Adrian Bellue: I was at a barbecue, still on crutches but I brought my guitar with me and someone said, “Dude, you should probably go play some open mics or something like that.”

Why It Matters: Big step for a closet guitarist.

AB: Yeah, I thought “well, I’ll try it,” so I played a few open mics and they wanted me back so I kept going back.  I made up business cards and then I started getting calls and eventually made enough money to get a hand-made guitar, and it’s been going like that ever since.

WIM: Well, like you said earlier: make good music and it will sell itself.  Call it marketplace karma, I guess.

AB: Something amazing happened to me this week, actually.  I got a call a few mornings ago from my friend Stu, who owns The Strum Shop in Roseville.  I contacted him originally because he was the only guy who was going to have one of these harp guitars from this builder named Jay Buckey.

WIM:  I’ve heard the name, but I can’t place him.  Canadian guy?

AB: He lives in the Ukraine, moved out there to kind of have solitude.  But I’ve really wanted to play one of this guy’s harp guitars because he wanted to specialize in intro models; you know, a couple grand rather than ten grand, which is still not something I have the money for.  I kept bothering Stu because I knew he was going to start carrying them, and I got to the store the same hour that the first one came in and I played it for hours.

AB: I even came in and played some shows there at the Strum Shop with the harp guitar, and they went really well.  But I couldn’t afford it, so I started saving up for it.  And then a few mornings ago I get a call from Stu and he said, “Hey, your new harp guitar is here, come get it.”

AB: Yeah!  I said, “Excuse me?” and he repeated, “Your harp guitar is here, come get it.  Someone came in and wanted to remain anonymous, but paid in full for it to be given to you.”

AB:  And no one in my family has the money for something like that, none of my friends have the money for that.  I have no idea who would’ve done it.  But I have it now, and that’s about it.

AB: I guess they just said they wanted to be anonymous and do something nice for a stranger.  I don’t know if maybe it was Stu.  My producer says it wasn’t him.

I really don’t know, but I have a couple of guesses.  It could’ve been a random fan who had the money and has high hopes for me, it could’ve been Jay Buckey himself because I’d just emailed him the week before asking him for more information on his harp guitars because I really liked the one I’d played.  Or John Doan, a famous harp guitarist, was performing at Stu’s shop just three days before all this happened, and his CD and DVD were in the case when I got it home.

WIM: Is that right?

AB: So that would explain who had the money and why he would want to remain anonymous, because he wouldn’t want the world knowing he bought some random guy a harp guitar.  I guess the point is not to think about it too much and just play it.

WIM: How cool is that story?

AB: Yeah, I was blown away.  I think that it’s part of some pay it forward movement.  You know, there’s been a lot of that going on since the incident in Connecticut (the Sandy Hook massacre).  Maybe someone just decided “I’m going to do something nice for this kid.”  Who knows?

WIM: So what kind of electronics did you outfit it with.  Just a bridge pickup?

AB: Because of all the percussive things I do, I experimented with a few different kinds of pickups before I settled on an L.R. Baggs unit called an iMix element blending system. It has a bridge pickup but it also has three different microphone transducers placed throughout the body of the guitar, and it all syncs up at a mix board that’s right at the sound hole.

It provides immaculate sound.  You can hear all the popping and tapping on the body loud and clear.

WIM: So what other guitars do you play?

AB: My present to myself this year was a custom built Alvarez baritone guitar.  It’s all Brazilian rosewood with a Canadian spruce top.  So that’s what I scraped and saved and ate rice for (laughs).

WIM: What did that run you?

WIM: That’s not too horrible.

AB: No, not too bad.  You know, I’ve always lived pretty simply — made just enough to pay the rent.  I was content just to do martial arts and live the simple life, until this last year when I decided to change my path.  Now everything’s coming together and I’m thinking about maybe trying to move into a house sometime next year, and I’m setting up a tour with some friends across the United States.

WIM: That’s quite a change from being a dojo rat.

<<<Back to the beginning

Where to find Adrian: