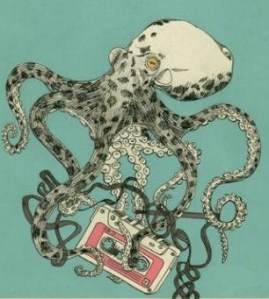 Violet is a world-class musical octopus and one of my favorite readers.  She loves her music, no doubt about that, and her Twitter feed is the business.  Catch her yourself at @VioletThunk.

She’s taken a really interesting angle on her playlist, I think you’ll dig it:

Greetings from the briny depths of the internets, where I inflict my octo-schtick. Here are eight tunes my suckered arms embrace, reflecting eight life obsessions.

“Double Life,” The Cars.  “Lift me from the wondermaze, alienation is the craze.”  Programming streams of foul language in Basic as a kid on a Commodore 64  paved the way for my taking up residency on the internet round about ’95. When it was pay by the hour AOL, I signed on for a volunteer position to earn time, because I couldn’t finance my habit any other way. These days, I’m awash in social media and virtual worlds, and it draws a line, forms a language I have to translate for the denizens of meatspace only, inspires piteous looks from the unaddicted family and strangers (all my friends understand, you see) who fear that I’ll never escape the event horizon of the all-consuming information singularity that I swim in hourly. Perhaps they’re right.

“Undestructable,” Gogol Bordello. “All is hardcore when made with love.” Forging ahead with your heart in the right place, doing what you do, even if your grammar’s a bit off: isn’t that the only way to achieve immortality? When in trouble, put on sardonically, passionately observant gypsy music, I say.

“Defender,” Manowar.  “To help the helpless ones who all look up to you. And to defend them to the end.” 1982: Advanced Dungeons & Dragons and I first met, probably in the aisles of a mall bookstore, never to again be parted. The following Christmas, I requested a Basic Set, and a lifelong hobby began. Though most adventures began in an inn, doing some god-forsaken job for a local nobleman, this song embodies a greater quest, and the spirit of adventure and heroism that draws gamers in. Roleplaying and gaming of various sorts do wonders for public speaking, negotiation, problem solving, and creativity. (Yes, that is Orson Welles in the intro!)

“Bodhisattva,” Steely Dan. “Can you show me the shine of your Japan? The sparkle of your China?”  Science fiction, jazz,and a sense of humor: that’s what Steely Dans are made of. I can dig it. A few of my votes for Bodhisattva would be cast for the musicians in this here writing. Sure, I believe in a higher power, but I’m also scrabbling down on the earth for the worthy, too. Nonchalant intellectualism and naughtiness is always enchanting.

“Disposable Heroes,” Metallica.  “Back to the front!”  I know, they’re maligned now, but when we were young, when I was, they were thrash metal pioneers and therapists for this Anger that I played host to, and still do. I was introduced to them mere months before the Master of Puppets tour came through Dallas. I’ll never forget Cliff Burton’s bass solo, or his whirling arc of butt-length auburn hair. I’ve probably seen them live more than any other band among dozens and dozens of shows, so many that sometimes I can’t recall if I’ve seen a band (Iron Maiden? Can’t be sure…). This song has a special significance, as it not only was angry and anti-establishment, but also, on my suggestion, became the name of an ill-fated laser tag team, of which I was the worst player, too intrepid for my own idiotic good.

“Mosquito Song,” Queens of the Stone Age.  “The further I go, the less I know, the less I know.” Tied for “favorite band” status with Gogol Bordello is Queens of the Stone Age, because they deliver a poison that is heavy, dark, honest, sexual, yet keeps its sense of humor as it intoxicates you. My possibly morbid, reliably consistent obsession with the big ending is reflected here. It’s not always sad, either. It comforts, motivates, frightens me at intervals, but it’s always there, isn’t it, sipping a whiskey in the corner of mundane or fabulous moments, sometimes clearing its bony throat as a reminder.

“It Only Hurts Me When I Cry,” Dwight Yoakam. “The only time I feel the pain, is in the sunshine or the rain.” Sure it’s prissy, and not saying the the suffering is literally continuous, but there’s always the Feelings, pulling and bugging. They’re deadened a bit now through control and/or the application of alcoholic anesthetics and age, but they’re still there, under the surface, seething, no matter what the weather. It’s good to know that Dwight struggles, too, is all.

“Watermelon in Easter Hay,” Frankness. Outspoken, creative, courageous, diligent, transparently principled or not so as his authentic self demanded… Frank’s vast body of work has a lot of humor, satire, downright grossness, an utter lack of modern political correctness, but at the heart, there’s a sensitivity, a caring, an empathy with everyone, somehow, even though he made fun of everyone, too. If someone asked me to choose a track to explain life, I’d pick this one, bittersweet, melodic, melancholy, honest, yet hopeful, even in the face of the inescapable.

Are you interested in writing your own “Deep Cuts” to share with your WIM-minded brothers and sisters?  Leave a comment or send me an email at: jostaffordjr@gmail.com.