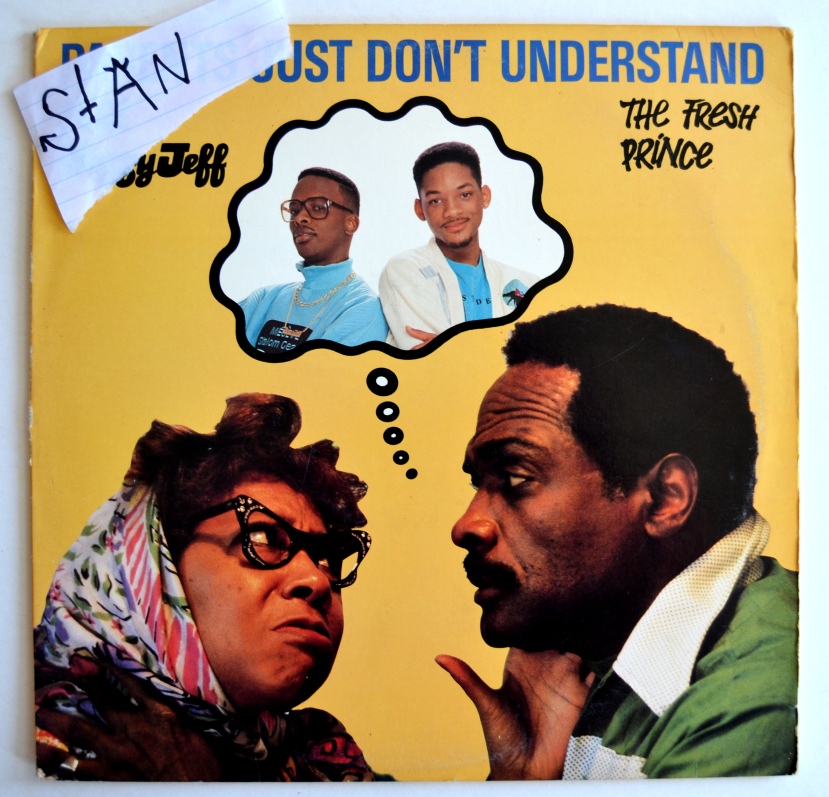 Stan was Scott’s boss. He worked directly for the owners of Starship Records. I didn’t know what he did other than be The Boss. He was maybe thirty, though his alcohol-puffy face looked a bit older. Stan wore starched white shirts and carried a soft leather briefcase. That’s about all I knew about the guy other than Scott’s occasional “Stan’s not going to like this” or “Stan is going to blow his top.”

The first time he came to visit me in the store was on a shipment day. “Did we get anything good?” he asked.

“I hate the rap shit, but damn it sells. I mean something good. I need some new music.”

“We got a new Police album.”

“No shit? I thought they broke up.”

“It’s a greatest hits, but is has a new version of ‘Don’t Stand So Close to Me.”

“I’ll have to check that out. I do love me some Police. You remember those badge-shaped picture discs? I have all of them.”

Stan wasn’t so bad. I didn’t understand why Scott acted so afraid of him.

With Jody gone I had nothing but work and school, and I did both to excess. If I was going to be a record store manager, then goddamnit I was going to be a good one. Working in a small town record store was a kind of miniature state of celebrity, an observation I once shared with Jody. “You’ve got to be kidding me,” she said, but it was true. Wherever I went someone recognized me, and our association was a cool place. “You’re the record store guy” ranks higher than “You’re the guy who unclogged my toilet” on the popularity scale, though the latter certainly should take priority.

I’d do anything to keep the records moving out the door. I sat in the parking lot and listened to customer’s 15,000 watt sound systems and pretended that I liked the sensation of being pummeled senseless by bass. I visited a loyal jazz customer’s house to admire his new equalizer. I guess it was a nice one — the pretty lights on its face moved up and down with the music. I even had dinner at a blind customer’s house, which was hardly philanthropic. The guy regularly dropped 250 bucks at my store.

The idea struck me that I could exploit my mini-celebrity to help the store, so I cobbled together a network of other mini-celebrities: a news cameraman who also happened to work next door at the yogurt shop; a couple of local booking agents and club owners; a local DJ  who called himself Falcon. Rubbing shoulders with Savannah’s entertainment movers and shakers was bound to reap benefits.

It wasn’t my store, though. It was Stan’s, and he expected the monthly take to exceed what the little green ledger in the back room’s safe said we made in the same month during the previous year. The next time he visited he made himself at home at my desk and reviewed the ledger. “What’s going on, James?”

“You got to get these numbers up.”

“Damn straight. Well, I’m going to get on out of here. Are there any good movies out?”

“I can call my manager buddy over at the theater and find out.”

“There ain’t nothing like going to a movie in the afternoon and sitting in the back row with a cup of ice water and a flask,” Stan said.

DJ Jazzy Jeff and the Fresh Prince were coming to town. I talked Falcon into bringing them by the store on their way to their radio appearance. What a coup for Stan’s hip hop record store. Next month’s numbers were going to be okay.

Next time he was in the store I told him about the upcoming visit. “Security at those things is a bitch,” he said. “You’re going to lose more in theft than you’ll make in sales, but you’re the manager. You handle it.”

The register came up exactly twenty dollars short one evening, an occurrence worthy of a visit from Stan. “What the hell, James? You hiring thieves now?” he asked.

“I’m sure somebody just made a mistake.”

“A mistake is a dollar, some change. Twenty bucks is stealing, now who did it?”

“Come on, Stan. You know everybody here.”

“Do I? How the hell do I know where Marvin gets money for his Jheri curl or how Felicity buys that damned cocoa butter shit she wears.”

“They wouldn’t steal,” I said.

“Then I guess it was you. Is that right, James? Maybe art supplies are a little expensive? Maybe you think you’re working too many hours so you deserved a bonus?”

We all had to take polygraph tests. Marvin was cool about it, but Felicity wanted to quit. “That motherfucker can kiss my black ass,” she said.

“If you quit he’ll think you’re guilty,” I said.

“Is your name James Stafford?”

“Are you the manager of Starship Records?”

“Is the store located on the planet Jupiter?”

“Did you steal 20 dollars from the cash register?”

“Did you steal 20 dollars elsewhere in or out of the store?”

“Do you know who stole the money?”

The investigator turned off the machine and reviewed the readout. He shook his head and worry lines creased his forehead.

“Your responses are inconclusive.”

“Well, look right here, for example. See that line? That means you aren’t sure whether or not the store is on Jupiter. Either you don’t know what planet you’re on or you’re really nervous.”

“Because I’m being treated like a criminal. You have all these wires on me, and I’m afraid I’m going to get fired or arrested and I have no idea where the twenty dollars went.”

The investigator stared at me. “Who do you think took the money?”

DJ Jazzy Jeff and the Fresh Prince arrived just after the weekly shipment. I set down the stack of albums I was filing and hung out with them and Falcon while they shook hands with customers. Because this wasn’t an official in-store appearance there wasn’t any promotion. People wandered in from Wal-Mart and the yogurt shop to see who rolled up in the limo.

It was a great time, low-key and friendly, and when it was time to head over to the radio station Falcon asked if I wanted to tag along. I asked Felicity to cover for me, and we headed for the limo. As we were walking out, Stan was walking in. “No shit? Superstars in my store,” he said. “How y’all boys doing? James treating you good?”

“Hey Stan, they have to get over to the station for their interview. I’m going to tag along, but don’t worry — Felicity’s got it covered.”

“Yeah, hey, get them to their interview,” Stan said. “Thanks for coming by. I love y’all boys’s record.”

The next morning when I arrived to open the store, Stan was sitting behind my desk. His face was red and puffy. “Sit down, James,” he said. “Let’s have us a little talk. How do you feel about yesterday?”

“Pretty good. The band was great, the customers loved it, and I think it will help us get more promotions with the radio stations.”

“Well here’s what I see. I walk into my store on a busy night and my manager walks past me like I’m some kind of asshole blocking his way to party with a couple of rappers. There’s records sitting on the floor, unopened boxes in the back room and my manager just dumps it all on some girl who is either too stupid or too dishonest to handle the cash register. Now how do you feel?” I didn’t say anything. “Well?”

That’s when I realized that “Stan” was one letter removed from “Satan.” I didn’t want to be a manager anymore.

Tagged as: DJ Jazzy Jeff and the Fresh Prince, The Police, Will Smith