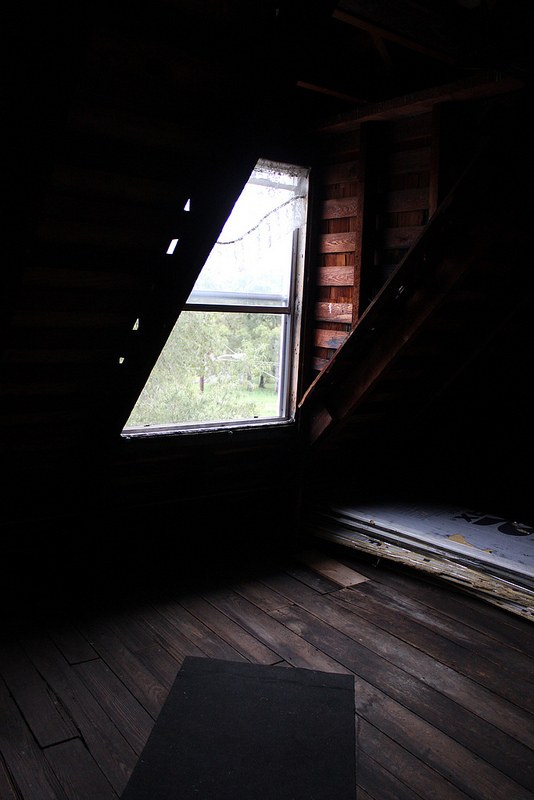 I climbed the flights of stairs leading to our attic apartment. Afternoon light poured through the dormer windows. The place was silent.

“Jody?” I said. The apartment was one large space, the only two enclosed areas the bathroom and a small closet. “Jody?”

The bathroom door stood open. She was always around at this time of day. “Jody?”

A shuffling sound whispered from the closet, quiet, like a restless child giving away her hide and seek spot. I opened the door and there she was, cross-legged on the floor. Hangers danced like wire skeletons stripped of their flesh, others lay lifeless on the floor. Clothes were piled around her like a cocoon in which she rocked gently. Her eyes were fixed in a stare, but whatever she watched was in her mind.

“What are you doing?”

She looked at me and moaned, not quite a cry, not quite an anything, just an exhalation that rattled her vocal cords; just a reflex, the moan of a corpse being lifted. She picked up some of the clothing with stiff movements, as if she had doll arms, and then she dropped them on top of her head. They tumbled down and rejoined the cocoon, and then she repeated the same slow, stiff movement.

I moved toward her and a guttural wail escaped her tiny mouth. I stepped back and closed the door and the wail quieted to a moan. I ran downstairs and knocked on our landlady’s door. “Can I use your phone?”

There are several landmarks that indicate one’s full passage to adulthood, the last of which is whom we call when our catatonic girlfriends are hiding in closets. An ambulance? A hot line? Pizza delivery? All are options, some better than others, that might be exercised by a grown-up.

But I called my parents. My father answered and I spilled the whole story in one anxious run-on sentence. “She’s fine,” he said. “Just leave her alone.”

“I’m afraid she’s going to hurt herself,” I said.

“She isn’t going to do anything. She’s just a flake.”

I did what my father said. The next day it was as if nothing happened.