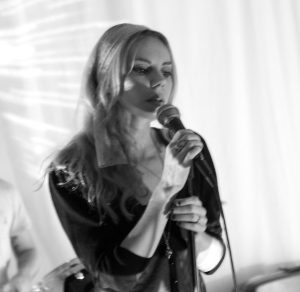 Southern California WIM correspondent and all around mega badass Anne-Marie Schiefer (@AllmyAnnie) has a tip for you if you’re kicking around Hollywood tomorrow night. Listen up: This lady knows her indies:

Hank and Her Ponies has a sound not normally homegrown among the palm trees. They are a blend of country and rock that lands somewhere between folk and swinging rock.

Fronted by the sweet crooning voice and harmonies of Lauren Cobb, HHP are busily working on a full-length album due out late this year. Cobb is a creative and free spirited Southern Californian gal that found her musical sea legs growing up listening to an eclectic mix of music ranging from Aretha Franklin to Patsy Cline to the Pixies. She started out playing piano as a child and then eventually added in singing. In her late teens she began singing with the now popular Orange County band The Blank Tapes (http://www.theblanktapes.com). About eight years ago she met and formed a duo with HHP bassist, Ryan Bartholemy. The duo, then called The Dead Flowers, decided to invite other like-minded artist to join them on stage which eventually lead to what is now HHP.

HHP has an EP that is a folk rock styling album that captures the musical influences that have informed Cobb and Bartholemy, who co-wrote all the songs. On ‘Hey Little Baby’ the harmonies are reminiscent of many of the great male/female country duos. In the piano driven ‘Lasso the Moon’ their soul sensibilities creep their way out in the poppy melodic leaning chorus. With ‘Lay Down and Die,’ the band’s most country influenced track, you can hear the Patsy Cline in Cobb’s voice and the southern country in the twang of the guitar and the cry of the violin. ‘Chantys’ is the band’s swinging, urgent earworm that encapsulates a vintage yet modern feel.

Live, HHP have a nostalgic leaning with the petite Cobb in her vintage clothes, guitarist Ryan Ratfield’s modern rockabilly style and Bartholemy’s harmonies and swinging bass. HHP is still traipsing the musical map searching for that unique ‘Hank and Her Ponies’ sound, but they have certainly shown that beneath a canopy of palm trees they are a band of musical siblings that are striving to make a timeless Americana sound.

If you’re in the LA area you can catch Hank and Her Ponies at Kulak’s Woodshed in Hollywood on March 29th. You can also find them on Bandcamp, and don’t forget to hit the purchase button and support this up and coming band.
Hank and Her Ponies are:
Lauren Cobb- Vocals
Ryan Bartholemy- Bass
Ryan Ratfield- Guitar
Shane Thompson- Drums
Shara Parker- Violin
Camille Ong- Backing Vocals