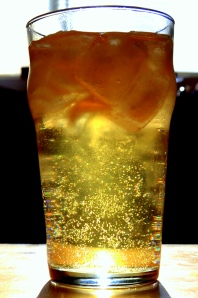 Refreshing carbonated beverages have made their way into several songs. Here are a few from my personal playlist.

“Coke After Coke (Coke 2),” The Who. This is from The Who Sell Out, which just might be the most listenable album in The Who’s brilliant discography. It’s a bit of a concept album, said concept being a pirate radio station with commercials bridging the songs. This groovy little cut appears at the end of “Glittering Girl.” A second Coke commercial appears at the end of “Early Morning Cold Taxi.”

“Pork Soda,” Primus. Les Claypool’s eccentric band looked like it was going to be huge after “Jerry Was A Race Car Driver,” but they veered into weirder territory with Pork Soda. It didn’t hurt their reputation with their loyal fan base, though, and that’s what really matters.

“This Is Pop,” XTC. What’s that? I’m being told they weren’t talking about carbonated beverages.

“Lola,” The Kinks. The greatest soda cameo of all time? Definitely.

“Soda Pop,” John Fogerty. The Artist Formerly Known as CCR emulating the Artist At That Time And Again Currently Known As Prince? The ’80s were a strange decade.

That’s it for me. Can you put the lime in the coconut and list some more sugary songs? I’m listening.