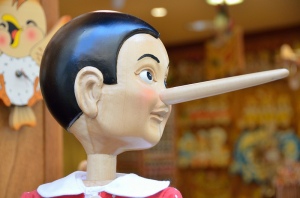 I’d be lying if I told you I’ve never lied. We all have, from little white lies on up to whoppers about everything from weapons of mass destruction to whether that dress makes the wearer’s ass look fat.

And so of course lies have a long history in music. Go back to the blues and some mean mistreater is always doing our hero wrong. Sometimes the lies are less overt, like Sammy Hagar telling us there’s only one way to rock, for example. Research shows there are seven distinct ways to rock. Come on!

This is far from a comprehensive list, and if I ever claim otherwise don’t believe me. Okay, here we go:

“White Lies,” Jason and the Scorchers. I’ve played this one for you before, but any excuse to expose you to one of the ’80s finest lost albums.

“La-La-La Lies,” Pete Townshend. Early Who! Pete’s demo version on Another Scoop will always be my favorite version.

“Telling Lies,” David Bowie. One from The Dame’s ’90s comeback era, this one from the dance-tastic Earthling.

“Braggin’ and Tryin’ Not to Lie,” Roddy Radiation & The Specials. Ska! Ska! Ska!

“Liar,” Rollins Band. Not a deep cut, but a fine moment in lying.

“Don’t Lie to Me,” Big Star. If you don’t have a little Big Star in your stacks, you’re missing one of the most influential bands in rock history.

“End to the Lies,” Jane’s Addiction. I loved The Great Escape Artist. Haven’t picked it up? Get on that.

“Jupiter Liar,” T. Rex. Late Marc Bolan, not too long before the car accident that claimed his life.

“You’re a Lie,” Slash. And speaking of career ending accidents. I kid, of course.

“Terrible Lie,” Nine Inch Nails. Trent Reznor played my hometown. It was a great show, and then he blogged about how bad the audience sucked. What pissed me off wasn’t that he had an opinion, but that he took away my nice night. That seems like a horribly selfish and childish thing for any human to do, much less a performer.

“Sorrows of a Blue Eyed Liar,” Chris Robinson Brotherhood. Nothing to say here. Just smoke your lunch and enjoy.