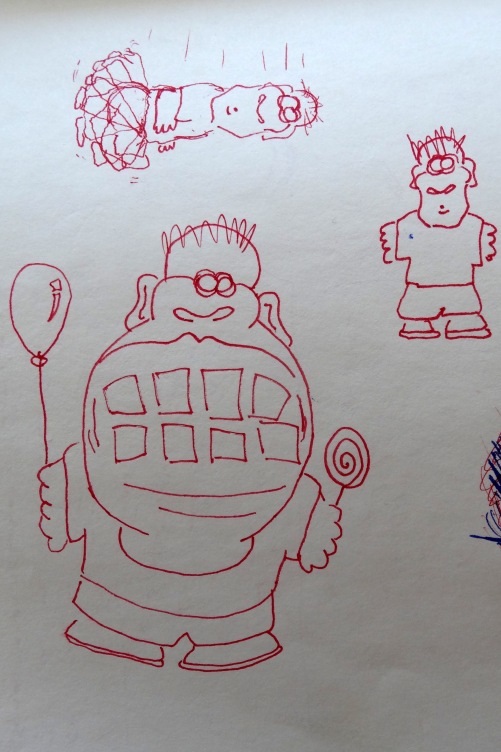 “Faith No More, great album.” I was working the cash register, and for once I wasn’t just blowing sunshine up a customer’s skirt: The Real Thing really was a great album. It was in the store’s power rotation, and it remains in mine all these years later. “What do you do?” I asked.

“No shit? I’ve always wanted to do that.”

“No kidding. Here, give me a call. I’ll take a look at your stuff.”

This wasn’t like trying to lie my way into a job hauling props or lights. This guy wanted to see samples. The problem? I’d never once considered a career in animation.

Back at the Su Casa Apartments I flipped through my sketchbooks, looking for any doodle that might pass for an animated character. I bookmarked a few, and then I called my new buddy and set up a date to go over to his place.

His apartment was up in the hills. The Hollywood sign grew closer and closer the nearer I got. I parked and walked down the path leading to his place. We sat in his studio, he on a stool in front of his drawing board and I on a kitchen chair. “Where did you go to school?” I asked.

He tilted his head like a dog hearing a high-pitched whistle. “Cal Arts? The animation school? Disney’s farm league.”

“Tim Burton was just a couple of years ahead of me. He made this film Frankenweenie that was, like, legendary it was so cool.”

“We all knew he was going to be huge. Not Batman huge, but huge.”

“Ever watch The Tracey Ullman show?”

“You know those little shorts before the commercials?”

“The Simpsons? I love those.”

“I did the first season of that.”

“And I worked with Savage Steve Holland on a couple of movies.”

“And right now I’m working on a Roger Rabbit short for Disney,” he said. “Let me see your  book.” I handed him my sketchbook. He flipped the pages quietly. “Presleystein. That’s pretty funny….I like this little character running past the window. What’s that all about?”

“That’s Art,” I said. He just keeps running past the window, hoping someone will give him a present.”

He flipped some more. “What’s this?”

That’s a Hitler Youth Slinky. Instead of going ‘shoop shoop’ when it walks it sounds like jackboots. It’s walking through a mall and when it tries to go up the down escalator it gets stuck and the pace increases until it can’t keep up, then it gets sucked into the escalator.”

“….if it was 1943.” He turned to his drawing table. “Look, if you really want to be an animator start with bounce and stretch” While he talked an image of Roger Rabbit emerged on a piece of tracing paper taped to the table. “All animation depends on bounce and stretch.”

He grabbed another piece of tracing paper and drew Roger again, this time elongated, and once more squished to half his normal size. He stacked the three drawings then flipped them back and forth. “See what I mean?”

He handed me the drawings. “Take those, practice, and let’s get together again in a couple of months.”

When I left his place I followed the narrow roads up, up, up, as close as they would take me to the Hollywood sign. I never practiced, and after that I avoided him when he came into the store, though I never understood why. He was a nice guy. Maybe the reality of working for something wasn’t as appealing as dreaming beneath the Hollywood sign.

Tagged as: Faith No More