From The Stacks: Lesbian Concentrate – A Lesbianthology of Songs and Poems

What the heck do lesbians and orange juice have in common? Fair question.

When I was a kid, a former Miss America runner-up turned pop singer named Anita Bryant decided that she was going to save the world from the gay scourge. Her campaign didn’t go over so well:

A few years earlier, Olivia Records was founded by some DC-area lesbians specifically as a women’s label. Their version of a pie in the face was Lesbian Concentrate, which was a fundraiser album in response to Bryant’s gay bashing.

Which brings us to that awesome album cover. Bryant was the spokesperson for Florida orange juice, so during my childhood gay rights and OJ got all mixed up into a thing. The Florida Citrus Commission wasn’t too happy about this, so when Bryant’s contract was up in 1979 they dropped her. Divorce and bankruptcies followed, along with assertions on her ex-husband’s part that it was all those dirty gays’ fault.

As for Olivia Records, in 1985 they passed on Melissa Etheridge, who turned out to be the most successful lesbian singer since David Bowie. In the late ’80s they went broke as a record label but reinvented themselves as a travel company catering specifically to lesbians. No word on whether Anita Bryant has booked a cruise or appeared as a performer, but I’m going to assume that’s a no.

If you pick this one up from an actual record dealer you’ll find it in the 10-15 dollar range. Online expect to pay much more due solely to the kitsch factor. Happy hunting. 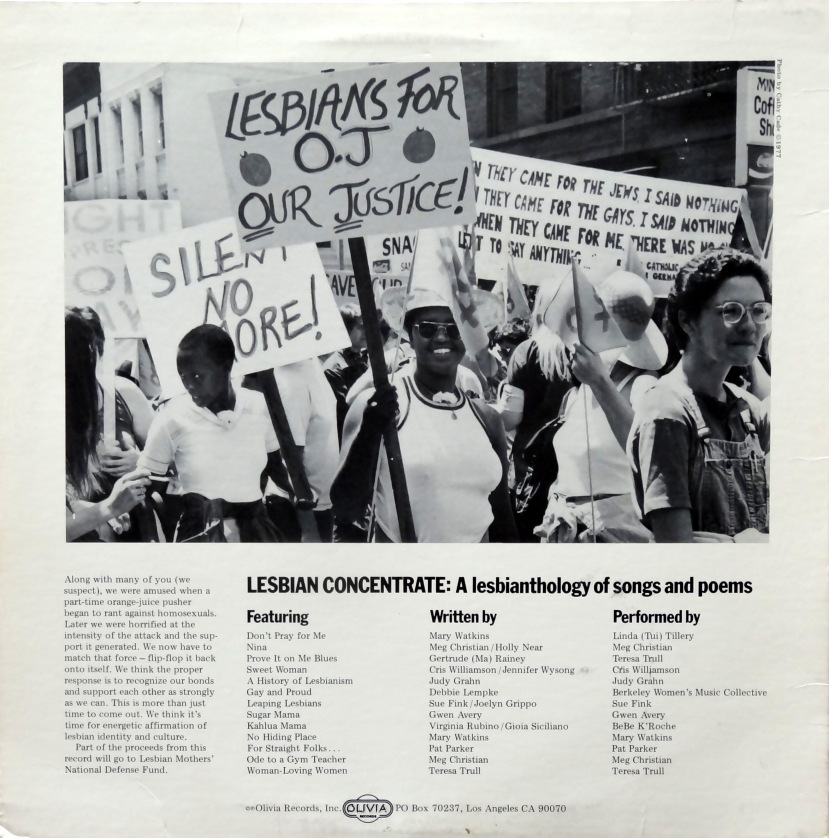