Throw Beck Thursday: 6 Types of Conspiracy Theories They Don’t Want You To Know About 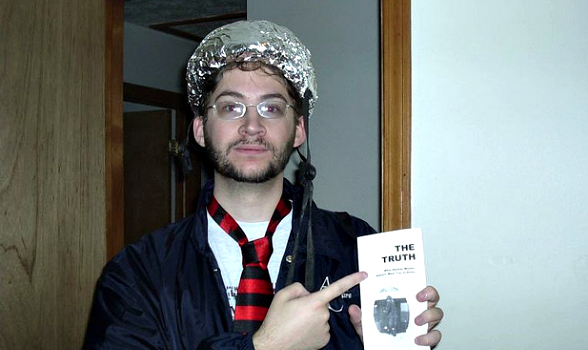 Revealed! Six things They don’t want you to know!

Conspiracy theories have been around since at least Roman times, when the first beam-blocking helmets were manufactured. I’m sure there are myriad reasons for creating alternate versions of reality, but the most compelling theory is that they allow believers to bring order to their universe. What else can an enterprising zealot do when faced with a mountain of evidence but demand that the real truth remains hidden? Hey, it worked for Scully and Mulder. Also, Oliver Stone.

I enjoy conspiracy theories for the same reason that I always enjoyed the carnival sideshow: I like watching hustlers ply their trade. The elaborate things that a barker does to get you into the tent to see the killer toads of the Amazon isn’t much different than the rap a 9/11 debunker might give you. The big difference is the stakes.

See, when I pony up my buck to see a bullfrog in a circus tent all that’s at risk is my money. Similarly, there’s nothing on the line but a few minutes of time when I listen to elaborate explanations of how the Moon landing was a hoax, or how it wasn’t but we were told by aliens never to return. I’ve always wondered what would happen if you put those two conspiracy camps in the same room.

But some conspiracy theories are dangerous. When pseudoscience and conjecture are used to whip up hatred for a group or individual, or to encourage apathy where action is needed, well, then we’ve crossed the line from bullfrog in a circus tent into something much darker. Don’t take my word for it: look up Gene Rosen, a decent person who did the right thing after the Sandy Hook shooting only to be rewarded with conspiracy theorist harassment. Or ask one of the polar bears treading water in the Arctic.

What makes conspiracy theories so seductive is the human predisposition to find patterns in things, whether it’s Jesus toast or canals on Mars. It’s this same impulse that attorneys exploit to create a reasonable doubt. There’s not a lot of distance between “Twinkies made him do it” and “fluoridated water gave Johnny ADHD.” If the glove doesn’t fit, it must be a conspiracy.

So which of the following are bullfrogs and which are poisonous? Which are crazy conspiracy theories and which are hidden truths waiting to be revealed? I’d love to tell you but they won’t let me, so you’re going to have to tell me. Okay, get your Youtubin’ fingers ready, here we go:

1) The Government Did It

Governments are frequent targets for conspiracy theorists because governments do a lot of inexplicably weird stuff. Add in a lack of transparency and you have a perfect conspiracy theory storm: FDR knew about Pearl Harbor in advance; 9/11 was an elaborate plot to trigger war; Sandy Hook and Aurora were carried out so that Obama can have your guns; the Birther movement; Area 51. On and on.

2) The Scientists Did It

AIDS was a government plot to control population; climate change is a hoax; the Moon landing never happened; they are keeping the aliens from us.

3) The Aliens Did It

Aliens built the Pyramids and Stonehenge. The greatest minds in human history weren’t human at all—aliens! The lizard people are among us. Aliens populate the Moon and demanded that we never return.

“Such and such happened, but you’ll never hear about it because the mainstream media doesn’t want you to know.” Spoiler alert: The mainstream media wants to sell advertising space. If aliens ever land and take away the guns so that Beyonce can marry Elvis and control the Middle East, you’ll see the news everywhere.

5) The Secret Cabal Did It

The big players in this space are the Freemasons, the Illuminati, and the religious or ethnic group of your choosing. They control everything, pull all the strings, make all the decisions, and have all the money. My personal favorite: The Illuminati took out Michael Jackson because he was becoming an embarrassment and a liability. Becoming? Missed that one by a couple-a-twenty years, didn’t you, guys?

Maybe there’s something to this “secret cabal” thing. If nothing else, it explains the popularity of Nickelback.

6) The Celebrities Did It

Well now of course the celebrities are working on behalf of the secret societies—that’s how they became celebrities—so let’s set that aside. No, the real action among celebrities is the faked deaths: Elvis, Kurt, Jim Morrison. Or they were murdered. Or they faked their murders. Or they were murdered after they faked their murders. Note: Marilyn’s death cross pollinates with The Government Did It, but I figured I’d keep her down here with her people.

So what are your favorite conspiracy theories? Leave me a comment and let me know. And please accept my apology: I know that this hasn’t been my finest piece. I blame the government.