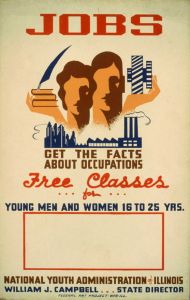 Work. As kids we can’t wait to get jobs. The idea of getting off of the kid economy — the birthday cards, allowance, babysitting and lawn mowing money — means freedom. Imagine all of the cool things I’ll be able to buy. Nobody will be able to tell me what to do with my cash.

Once we land that first gig, we’re hooked. I’ve been working since I was 14 years old, and I’m going to have to keep working until the poor bastard whose job it is to lower me into the ground gets it done. I’m sure he said “I want to be a gravedigger when I grow up” when he was a kid.

If we were really serious about reducing anxiety in this country, we’d cut out the medication and focus instead on reliable, decent paying jobs. People have enough to about without sweating whether their paychecks are secure.

Ouch, I just slipped off of my soapbox. Here are some songs about jobs:

“This Fucking Job,” Drive-By Truckers. Come on, you know you’ve said it.

“Dead End Job,” The Police. An outstanding B-side from Stewart, Andy, and Sting. There isn’t a lute within a thousand miles of this track.

“The Dirty Jobs,” The Who. Quadrophenia is such an amazing album. Ask me today, I’ll label it The Who’s masterpiece. Ask me tomorrow, who knows? The only thing I can say for certain is that Face Dances isn’t likely to top the list.

“Job,” Iggy & The Stooges. If you turned your nose up at the Stooges reunion because — well, whatever your reason — I encourage you to rethink that position. Iggy still knows exactly how to do his job.

“Zipper Job,” ZZ Top. That little old band from Texas still gets it done, too. What makes ZZ Top so great is that the funk is always bubbling just beneath the surface.

Well, that was a dirty job but someone had to do it. Now it’s your turn to get a job, so get to it — I’m listening.