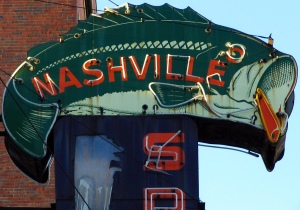 Nashville is a great town, even if my introduction to it was a little cruddy.

Of course, it’s also one of the great music towns, even more so these days. For most of its musical history Nashville was solely a country music mecca, but in recent years it has attracted even the whitest of stripes: Jack White calls the place home nowadays. White wasn’t the first — the rock folks started migrating down there in the ’60s after Dylan, who went for the exceptional musicianship of the studio musicians.

So it comes as no surprise that Music City has been the topic of lots of songs, and not all country. Here are a few favorites:

“Wang Dang Sweet Poontang,” Ted Nugent. The song has nothing to do with Nashville, or it didn’t prior to Double Live Gonzo.

“Congregation,” Foo Fighters.  This is from the Foo’s Nashville episode of Sonic Highways.

“Nashville West,” The Byrds. Nobody loved Dylan like the Byrds, so let’s slot this one here.

“No No Song,” Ringo Starr. I debated including this one. I feel like I’m stepping on good friend and frequent commenter Robbo’s territory. Sorry, Robbo!

“Strings of Nashville,” Pavement. Hide the knives before spinning this downer.

“Nashville Bum,” Waylon Jennings. I had to go out on a Waylon note.

There you go, eight cuts about Music City. Want to add a few? I’m listening.