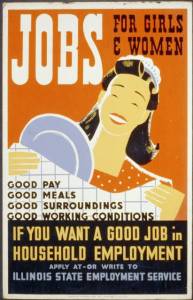 Work is such a huge part of our lives. A huge, miserable part.

Working 16 hours per day 6 days a week to ensure that the world got another “Ernest” movie seemed like a bit of a waste of time, but overall I really dug working in the film business. Aside from writing, I think it was the most enjoyable job I ever had. Worst job? That would be my summer as a roofer in South Carolina; well, not the entire summer. I got the hell out of that gig after almost falling off the back of a house.

Music would be a pretty great job. I think people are happiest when they make things, be it coffee pot handles or songs. Having something tangible to show for that time investment is satisfying. Maybe that’s why kids like Legos so much.

Songs about work range from dread to irony to celebration. Here are a few from my stacks:

“Finest Worksong,” R.E.M. Hardly a deep cut (at least for R.E.M. fans), but since I cribbed the title for this episode of “Deep Cuts” I had to include it.

“Working in the Coalmine,” Lee Dorsey. You were expecting Devo, weren’t you? Sorry, suckers — it’s Lee Dorsey all the way.

“Julie’s Been Working for the Drug Squad,” The Clash. I have nothing glib to say, just wallow in the awesomeness.

“Keep on Working,” Pete Townshend. Empty Glass is Townshend’s finest solo album unless you throw in Scoop, his first official collection of demos.

“Model Worker,” Magazine. I played this to death, along with the rest of the Urgh! A Music War soundtrack.

“Sexual Harassment in the Workplace,” Frank Zappa. One of my favorite Zappa cuts. If you didn’t know what a tasty guitarist Frank was, this is a great place to learn that.

“Ten Men Workin’,” Neil Young and the Bluenotes. This Notes For You is one of the most reviled albums in the Neil Young catalog (not as hated as Trans, but still), but I really like it.

Regardless of whether you’re employed by MCA or doing your job simply to get to the weekend, there are quite a few more songs out there about working. Care to share some of your favorites? I’m listening.