We’ve Got Five Years My Brain Hurts A Lot (or Happy Birthday, Wimbot) 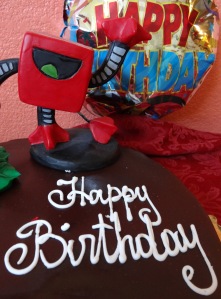 I am overwhelmed and stressed out. Diffuser and Loudwire commitments over the next few days leave me virtually no time for anything else.

That is not a complaint. The folks at both of those sites have been good to me, so a few days of discomfort is no big deal. By the time you see this I will have spent the weekend shooting some amazing bands for Loudwire, so who am I to bitch and moan?

But I’d like more time to focus on true tales of liquor, lust, and primer gray Camaros. I’ve been compiling these little sketches (calling them stories seems like a stretch) for five years now, stacking them like firewood for a long winter that never seems to come. My guess is that the memoir pieces on Why It Matters total between 400,000 and 500,000 words, but that may be generous. I’ve lost track of the word count. Surely I could pull a coherent 80-100k narrative out of that, if I would just do it.

I don’t think I’ve submitted a single creative nonfiction piece for publication in the last year. My impulse is to claim that I haven’t had the time, but the truth is much much more coarse and practical: With time at a premium, those who pay get priority. I’d gladly spend my days writing stories about listening to the Nuge and jerking it to Bo Derek calendars circa 1980 if I could find a patron willing to pay me, but the simple truth is that kind of writing doesn’t sell unless one is much better established than I am.

And speaking of established, we’re nearing the end of the story that I planned on laying down for WIM. I don’t have a set plan, but the horizon isn’t too distant. That’s a little spooky for me. Over the last five years, my obligation to this Monday deadline has quite literally changed my life. It has provided a structure that enabled me to move from someone who thinks about writing to someone who writes. What’s the key to writing a half million words? Discipline, routine, ritual, slow and steady wins the race, and all that shit. If you don’t have a regular deadline, make up your own. That’s the only magic writing pill you need.

And you’ll get more than a pile of words for your troubles. Monday deadlines have brought me friends of both the organic and intergooglewebtube varieties. I’ve seen my byline on nearly 500 pieces picked up by tiny literary magazines and huge websites like Esquire and Salon. (The strangest yet? Probably Good Housekeeping.) I’ve been interviewed, and I’ve interviewed some childhood heroes and other interesting people. All of that goodness didn’t come from any talent on my part — it’s all due to showing up for 260 consecutive Mondays.

The little things make me feel good — the occasional email or care package from a reader, a comment on a Monday piece, a retweet. Now and then a band’s social media managers will find something I’ve written and promote it, which of course is really promoting the band, but it’s still cool to see my work on Rage Against the Machine’s Facebook page or whatever.

But I can’t shake the feeling that I should be further along. There’s a next step and I need to get to it before another 52 Mondays pass — or at least identify it. Maybe it’s simmering those 500,000 loose words down into a tight 100,000 word manuscript. Maybe it’s pitching to bigger magazines and websites. Perhaps it’s scrapping WIM and building a for-profit site, going after grant money, or hitting the writer conference circuit. I had a great time this year presenting at the Hippocamp conference, after all, which really surprised me given my batshit craziness. Maybe it’s time to work on some fiction, I don’t know.

I remember thinking years ago that if just one of the six billion people on the planet at that time enjoyed something that I wrote, I’d feel like a success. That was my yardstick, and it still feels like a good one. But that’s not how we function. The goal line keeps moving: If only I was in print, if only somebody would pay me, if only this, if only that. Satisfaction is a treadmill — no milestone is ever good enough. It’s almost like some kind of capitalist mental illness: If my writing career isn’t growing, it’s dying. The operative word here is “career,” not “writing.” The writing seems to be getting tighter, at least I hope so. I’d like to think there’s been a little artistic improvement. No, it’s the career part of the equation that drives the dissatisfaction.

During my first month of Mondays five years ago, WIM received 76 total views, half of which were probably from two or three people who remain my biggest cheerleaders. I was one happy little bunny, because I’d hit that longstanding goal of connecting with a reader. That’s why it matters; that’s all that matters.

I appreciate you hanging in with me for 260 Mondays — all three of you. Year six might some big changes in Wimworld, or it may just be more of the same old bullshit. What won’t change is my gratitude to you for pulling me out of the thick molasses of self doubt, anxiety, and complacency and providing me the opportunity to become a person who writes. I remain truly grateful.

Tagged as: David Bowie, Rage Against the Machine, Ted Nugent