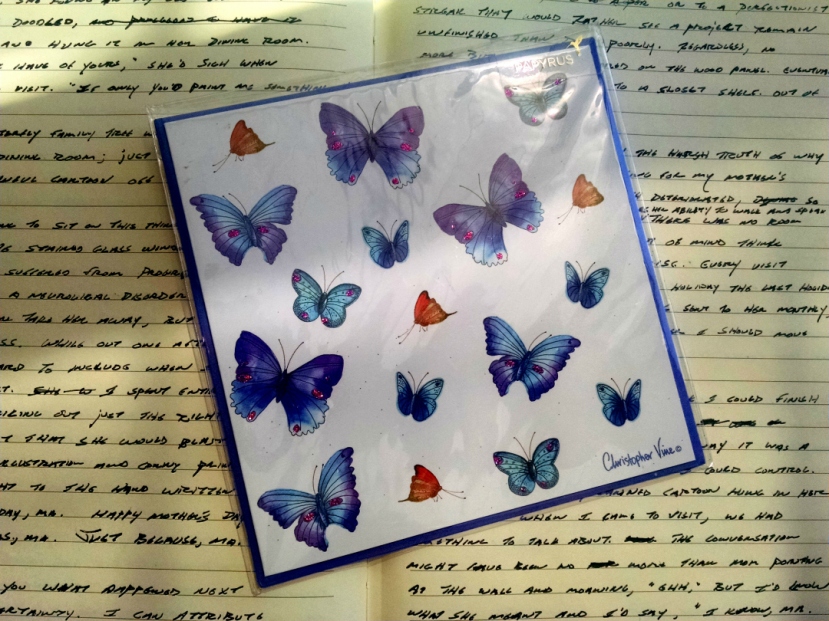 While filing albums a couple of nights ago, I found a greeting card. It was stuck in a box of pens, computer cables, record cleaner, more pens, and a few pocket notebooks.

The retail price of this card was $4.95. Apparently I purchased it from a store named Papyrus. The front features 17 watercolor butterflies, the largest of which are embellished with tacky pink glitter. The craftsmanship — minus the glitter, which I assume wasn’t the artist’s choice — is fine, but the card doesn’t do anything for me. No greeting card does.

When I receive one of these things I blast past the sappy cover illustration and canned printed sentiment and head straight to the handwritten content: Happy birthday! Congratulations! Feel better! The signature is the thing — who took the time to visit Papyrus and shell out five bucks on me? What a thoughtful person, I think; well, most of the time. Occasionally I roll my eyes at the obligatory nature of the exercise: a birthday card from my insurance company, for example.

I’m terrible about sending cards. I’ve sent Christmas cards maybe three times in my life. Once I sent an aunt a birthday card. Perhaps my most memorable card giving experience involved someone for whom I cared very much but with whom my relationship had soured. We were at a point where making any effort at bridging the gap was difficult yet the desire to do so was great, so I leaned on our good friends in the greeting card industry. I bought a nice card, wrote something probably too sappy and much too sincere, and off it went.

A day or two passed before I heard back. “I got your card,” the person said.

“I was just going to throw it away, but I read it.”

“Okay,” I said. The person then proceeded to paraphrase in a mocking voice what I’d written. Five bucks worth of paper and glitter are no inroad to detente between hostile nations.

Butterflies were my mother’s thing. One must be careful what one says around friends and family, else he or she will be shackled to the albatross of “a thing.” A flippant “Praying mantises are kind of cool” can turn into years of praying mantis coffee cups, t-shirts, Christmas ornaments, figurines, and plush toys. As a young boy I was the airplane kid, later it was dragons. During my teens I enjoyed a few years of Marilyn Monroe-related gifts, which admittedly were much more pleasant to look at than carnivorous insects.

Currently I’m “the taco guy” among my Facebook friends. I don’t remember how that one started, but I assume I made a taco joke. Now people send me taco memes, taco news, photos of tacos. I don’t mind; in fact, I enjoy it. Not only are tacos delicious, but so is thoughtfulness. It’s nice to be remembered, even in a humorous way. Fortunately for my mother she preferred butterflies to tacos, as over the years she amassed a full meadow of butterfly keepsakes: shirts, jewelry, decorative items. She wouldn’t have looked as classy decked out in tacos.

Years ago I picked up a butterfly stained glass window for her in an antique shop. It sat in my house for a few years, but I finally managed to ship it. I remember a bookmark, too, and earrings. Over the last three decades I’ve lost count of the number of butterfly things that I sent her.

A few years ago I started working on a butterfly painting for her. My plan was to fill the canvas with photo-realistic renderings of butterflies. Being left-handed and having no real composition in mind, I started in the lower right corner of the panel. That first butterfly came out okay, so I added another a bit to its left, then a few more just above them. A theme emerged. Those two butterflies in the corner were my parents, the ones above them my sisters and me. Above those I would layer in the butterflies representing our children and, in the case of my oldest sibling, our children’s children.

I’d never painted anything specifically for my mother, which had grown into a sort of recurring theme throughout my adulthood. My mother achieved a Judeo-Catholic guilt mastery the likes of which had never been seen in a Methodist, and she played it like a virtuoso. After I left home, she found an old cartoon that I doodled, framed it, and hung it in her dining room. “It’s all I have of yours,” she’d sigh when I came to visit. “If only you’d paint me something.” Eventually being guilted into promising my mother a painting became a vacation tradition, like playing Scrabble in that same dining room.

The butterfly family tree was just the thing for Mom’s dining room — just the thing to settle the books and get that awful cartoon off of that damned wall.

I wasn’t going to sit on this project for years like I did shipping the stained glass window. My mother now suffered from progressive supranuclear palsy, or PSP, a neurological disorder that inevitably would take her away, but exactly when was anybody’s guess. We were fighting time, but we had no idea how much.

While out one afternoon I picked up a card to include when I shipped the finished canvas. I spent entirely too much time selecting just the right one given the fact that she would blast right past the trite illustration and corny printed sentiment and head straight to the handwritten note: Happy birthday, Ma. Happy Mother’s Day, Ma. Merry Christmas, Ma. Just because, Ma.

I can’t tell you what happened next because I really don’t know. I can attribute it to laziness, or selfishness, or to a perfectionist streak that would rather see a project remain unfinished than done poorly. Regardless, after a time no more butterflies appeared on the canvas. Eventually the piece was relegated to a closet shelf filled with similar abandoned art projects. Once it was out of sight it was out of mind: I never finished the only piece of artwork that I ever set out to make specifically for my mother.

In retrospect, I think the harsh truth is that I never finished the painting not because of laziness or selfishness, but something altogether different. As my mother’s health deteriorated, so did my capacity for denial. Once her ability to walk and talk were mostly gone, there was no room for magical “out of sight out of mind” thinking regarding her disease. Every visit felt like the last visit, every phone call the last phone call, every holiday the last holiday. Each January I paid for a year’s worth of flowers to be delivered to her monthly, but I began to wonder whether I should switch to monthly payments. She seemed to be slipping away so quickly. There wasn’t much left to cling to.

I think I couldn’t finish that painting because in some twisted, subconscious way delivering it would have been one less thing to cling to. As long as that damned cartoon hung in her dining room when I came to visit, we could continue a conversation that had been going on for years. Granted, that talk might have been no more than Mom pointing at the wall and moaning, “Ehhhh,” but I’d know what she meant and I’d say, “I know, Ma. I’ll make you something nice.” But when the butterfly painting was done we wouldn’t even have that anymore.

And so I’m left with a blank five dollar card featuring 17 glittery butterflies, coincidentally the same number that I would render for her as of last week’s arrival of her fifth great grandchild: a little butterfly who burst from the cocoon three months too late to meet his monarch.

I’m not sure how I feel about any of this. My impulse is to feel both guilt and regret, and I do, but those emotions feel as flat and manufactured as the printed sentiment on a greeting card. I suppose I could go for some sappy moral here about showing people you love them before it’s too late, but that seems equally trite.

The truth of the matter is that my mother knew that I loved her. Of course I could have done much more to show her that over the years, but she knew. I saw it in her frightened eyes while she lay dying. I felt it when she squeezed my hand. No five dollar card or shitty painting would have substituted for sitting with her while she died. At least that’s what I tell myself. For all I know, as she was disappearing down the great rabbit hole, she may have been thinking “I gave everything for that ungrateful little bastard, and all I got was a cartoon that I found on his bedroom floor.”

Still, I don’t know what to do with this goddamned card now that I’ve found it. The thing has juju now. I can’t imagine scribbling “happy birthday” on its blank surface and sending it to a friend who wouldn’t take the time to glance at its glittery butterflies.

Perhaps I’ll leave it just as it is — incomplete like the painting that it was supposed to accompany, unfinished like the battle of wills over the dining room doodle, unresolved like my feelings for the mother I wasn’t ready to lose.

Maybe I’ll take it with me when I visit my father this summer. Maybe when no one is around to question why, I will lean the blank card against my mother’s urn. I think she’d appreciate that. It’s decorated with butterflies, too, which were my mother’s thing all the way to the end. I hope when my time comes I don’t end up in a jar covered in tacos.