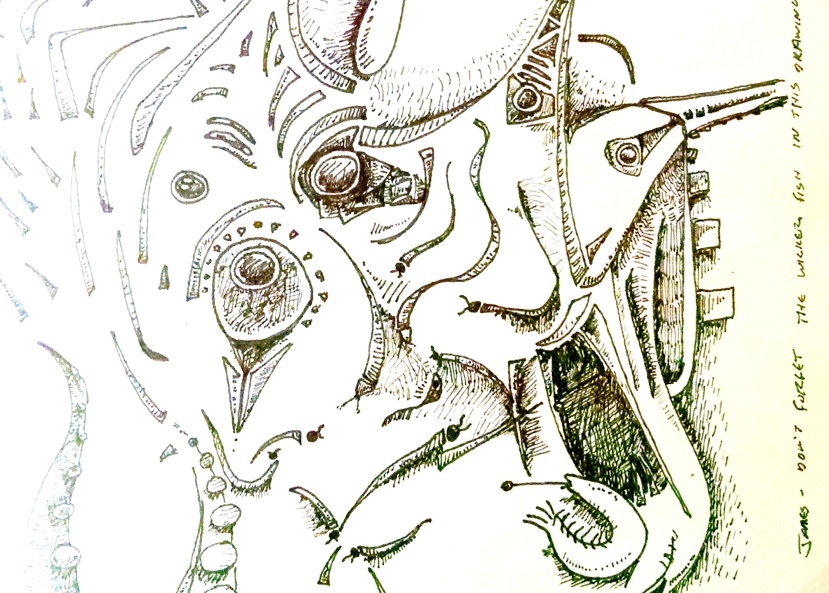 I walked down Santa Monica Boulevard, past the hustlers lurking near clubs named Offshore Drilling and Spike, past the Pussycat Theater and its chlorinated darkness. I turned left on Fairfax and walked past the high school where the Red Hot Chili Peppers formed. I came to the CBS Television Studios, where hunks of the gaudy Price is Right set waited outside the hangar-sized sound stages.

The street was boring. Los Angeles streets aren’t made for walking. I cut through the farmers market just to see and hear something other than automobiles–to smell something more pleasant than exhaust. Small stands and al fresco restaurants were scattered throughout the sprawling market, clouds of fragrant steam rolling out of their open kitchens. I didn’t realize how hungry I was.

One stand sold nothing but bread and gumbo. I hadn’t had gumbo since I stopped eating meat. It smelled so goddamned good. My Buddhist friend appeared in my mind’s eye. We sat in a booth at Canter’s Deli, discussing his vegetarianism. “I just don’t want to eat meat,” he said.

“But what if you wanted to?”

“But then you’d be causing suffering,” I said. “That’s against your religion. What would the Buddha say?”

“He’d say eat the meat if being a vegetarian was so important to my identity. Once it’s bigger than a choice it’s an attachment, a manifestation of ego. That’s the kind of thing that rots you from the inside much faster than a club sandwich ever will.”

I ordered the gumbo and a big hunk of crusty bread. In minutes nothing remained but a sopped clean bowl filled with shrimp tails.

Rick’s apartment nestled in the green space separating the farmers market and the La Brea tar pits. “Hey, you made it,” he said. “Come on in.”

“Thanks. I’m too old for that whole Hollywood, Velvet Underground, junky pad thing, you know? Where’s your place?”

“Right on, that’s cool. Do it while you’re young. Eventually you’ll want a nice place with a comfortable couch. You hungry?”

“Yeah. I like walking, and I didn’t want to be tempted to drive anyway,” I said.

“Sure.” He walked to the kitchen and came back with three tabs. He handed me one and put the other two on his tongue. I ate the little piece of paper and opened my notebook. Nothing to do now but wait for the LSD to leach out of the blotter and sneak into my bloodstream. Rick put on an album and laid down on his couch.

I doodled and worried about the shrimp in my belly. What if my body couldn’t handle all of that meat after years of clean eating? The drawing wasn’t anything more than a doodle to pass the time. Rick stood up and flipped the record. It was some psychedelic hippie shit–a little too on the nose for my taste, but his house, his rules. It was just background noise, anyway. I focused on my drawing.

The record ended. “Hey, do you think maybe your stuff dried out? I’m not feeling anything,” I said.

“Give it a few more minutes, Rick said, and he put on another record.

I kept doodling. My stomach cramped, but it didn’t. Something was wrong. I must have eaten one of the shrimp while it was still alive. The little bastard was walking around in my stomach, its spiny legs tearing into my soft meat like fish hooks. I tasted copper and smelled rat poison. I kept drawing for no other reason than to distract myself. Eventually Rick got up and changed the record again. This time it was a Timothy Leary trip sitting album. The tambourines shook and the guitar echoed while Dr. Leary served as our acid-soaked tour guide. It was oddly calming.

The page filled with images that chose themselves: wicker fish, a bison, fish hooks. I grew concerned that I would forget what I’d drawn, so I wrote myself notes on the page’s margins: “James don’t forget the wicker fish.” A passenger train emerged on the page, but with the head of a tongue-wagging lizard, its pupils dilated.

The only thing keeping me alive was the drawing. If my hand stopped moving I would cease to exist. The shrimp were still trying to claw their way out of my belly, but that was another matter. Even if they burst through I’d be fine provided my hand kept moving.

Rick lay on his couch, eyes closed, concentrating on the words of Dr. Leary. On the wall behind him hung an abstract green painting mounted in a black frame of tangled black iron, like a spider’s web. I returned to my drawing before I died.

Hours passed like this. I don’t know how many, but eventually we got to the end of the last album. Rick rose and lifted the tonearm.

“Yeah, thanks,” I said. He disappeared into the kitchen for a few minutes and reemerged with two teacups. I closed my notebook and sat quietly until my cup was empty, then I said goodbye and started the long walk to my Hollywood Velvet Underground junky pad. The sun was up, but the streets were empty. I was going to be okay.