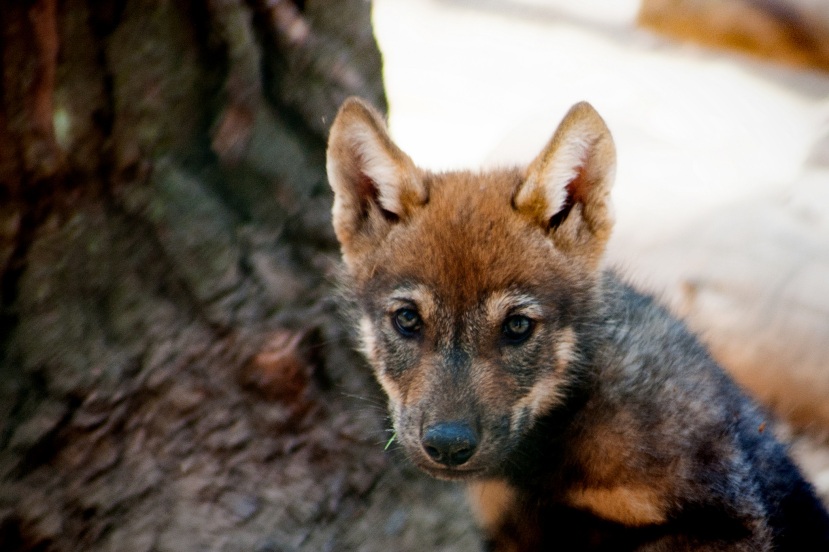 “What are you talking about?” her mother said.

“In the kitchen. That cute little puppy eating out of Bongo’s dish.”  The pair walked to the kitchen. “Look,” Amy said.

“Well, where did you come from?” Mother said. “Are you one of the neighbor’s litter?” The puppy ignored them.

“No, he can’t be one of the Gorman’s puppies,” Amy said. “They’re all hounds, and this little guy looks like he has some German shepherd in him.”

“He must be half-starved. As soon as he finishes eating he needs to go. As it is, we’ll probably have a little beggar on our hands,” Mother said.

The front door opened. Father’s heavy footsteps shook the wooden floor. He swung open the kitchen door and said, “What are my two ladies up to this evening?”

“Okay, we don’t know where he came from. He just magically appeared,” Mother said.

Father bent down and said, “Where did you come from, boy?” The pup jerked its head from Bongo’s dish and snapped at him, teeth bared. The fur on his back stood up and he growled as he backed toward the corner. “Hey! Easy,” Father yelled. The puppy wailed and snarled. “Where did you find this little monster?”

“He was here when I walked into the kitchen earlier,” Amy said. “I didn’t bring him home, I swear. He just showed up.”

“Puppies don’t just magically appear in a house, goddammit! I want some answers!” Father yelled. The puppy howled. “This thing is possessed! Open the door and I’ll shove it outside with a broom.” Mother moved slowly toward the back door. “Ready? On three.”

“Roger, I don’t think we should open the door,” Mother said.

“You got a better idea?”

“Just look outside,” she said. His eyes followed the direction of her pointing finger. Three wolves stood 50 yards from the house, staring at them.

“Jesus Christ. It’s a goddamned wolf cub,” he said. Mother locked the deadbolt. “Really, Shirley? You think wolves have mastered the doorknob? We’re safe in here. If we can get this little guy out of here we’ll be okay.”

The cub’s eyes flashed and his bared teeth glimmered. He let out a howl and the wolves outside responded. Amy looked at the little pup and imagined herself in its place–alone, scared, separated from her parents. The poor thing was probably just hungry. He must have followed the smell of the dog food, but how did he get inside? Maybe she left the kitchen door cracked when she let Bongo outside–

“Bongo! He’s out there with those wolves!” she screamed. Her shrill voice set the cub off again, which in turn set off the wolves. Mother started crying.

“Goddammit, a man can’t think with all this racket!” Father shouted. “Shut up, the whole damned bunch of you! Just shut up!” He grabbed a sauce pan from the stove and beat it with a metal spoon. “You hear me out there, you sons of bitches? Shut up so I can think!”

If anything they howled louder, more urgently. Father looked out the window again. Six wolves now stood together, one pacing back and forth. The pack was maybe 25 yards from the house now. Bongo’s barking grew louder as he came into view. The pacing wolf ducked its head beneath the jaw of the biggest of the pack, who stared at the dog with what looked like a combination of curiosity and disinterest. Bongo growled and barked and lunged at the pack from several feet away.

“They’ll kill him, Daddy. We have to do something,” Amy said.

“All right, get away from that door,” Father said. “I’m going to whistle for the dog, then open the door. Shirley, you hit the little son of a bitch on the ass with the broom when the door opens. Maybe we can make a hostage exchange.”

“You want me to hit a wild animal with a broom, Roger?”

“Well I can’t very well open the door and shoo the damned thing out at the same time, can I?” he said.

“Fine. You and Amy go to the bedroom and shut the door. I’ll do it myself,” Father said, and he snatched the broom from Mother’s hands.

He could hear his own heart beating. The broom shook in his hands, the wooden handle damp in his sweaty grip. He unlocked the door and opened it just a crack. “You ready, little fella? Let’s get you back home,” he said. The cub growled at him, and Father lunged across the kitchen, swinging the broom. The cub clawed and bit at the straw and tried to back deeper into the corner, but his haunches were already pressed against the cabinets. “Go on!” Father screamed. He managed to get the broom behind the cub and nudge it toward the door.

All the way across the linoleum floor the cub fought the broom and tried to get at its aggressor, but Father kept screaming and batting at the little wolf. The two slowly made their way to the door. He kicked it wide open and yelled for Bongo, never taking his eyes off of the pup, still swatting at him with the broom.

And then Bongo was on him, so glad to be home safely that he threw his full weight at Father and knocked him down. The broom flew across the room. “Get off me, you mutt. You’ll get us both killed,” Father yelled. He looked up, but it wasn’t Bongo staring him down.  As big as the wolves looked from 25 yards, this one looked even bigger standing on his chest, the huge snout sniffing at him, the curled lips baring the fierce teeth.

The little cub paced back and forth, too frightened to jump over Father’s feet and run out the open door. Wolf and man stared at each other, and then the powerful jaws locked onto Father’s throat. He grabbed at the wolf’s head and kicked his feet. The cub saw his opportunity and ran for the doorway. The wolf tore at Father’s throat until the screaming stopped. The air was still but for the sound of the wolf’s sharp claws clacking against the linoleum as it walked slowly out the back door.

Amy and Mother listened to the silence for several minutes before creeping from their hiding place. Father lay still on the floor. “They didn’t have to kill him,” she cried. “Why did they kill him?”