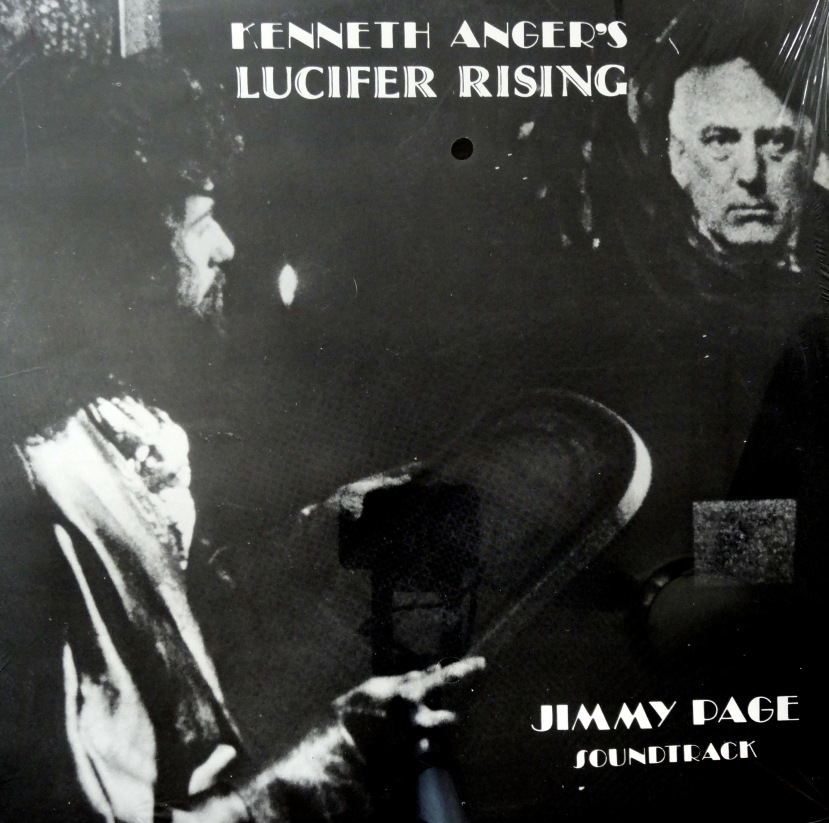 Now here’s a bootleg to get excited about.

The story begins with occultist Aleister Crowley, who in 1899 at age 24 purchased a manor on the shore of Loch Ness named the Manor of Boleskine and Abertarff, later Boleskine House. We’ll yada yada yada over some details that aren’t soundtrack-related here, but the gist is that Crowley allegedly unleashed some demons in the joint before selling it off in 1913. We’ll yada yada again here and run the clock up to 1965, when the most recent owner committed suicide by shotgun in Crowley’s old bedroom.

About a year later, filmmaker Kenneth Anger moved from L.A. to San Francisco to work on his next project, Lucifer Rising. Since his teens, Anger had been enamored both with Crowley and the religion he created, Thelema. The film was to be based on the Thelemic notion that humanity was entering the “Aeon of Horus,” which for our purposes can be thought of as synonymous with the hippie concept of the Age of Aquarius, so the free spirits on the Haight were precisely what Anger was looking for. He scouted the city for a young man to play the title role, finally settling on Bobby Beausoleil, a musician who not only ended up living in Anger’s home but also served as his chauffeur. During this time, Beausoleil suggested that he not only star as Lucifer but also score the film’s soundtrack.

The Beausoleil version of the film evolved into another project entirely, the movie Invocation of My Demon Brother. In ’68 Anger left San Francisco and settled in England, where he got to work on his latest vision for Lucifer Rising. He befriended Mick Jagger and Keith Richards around this time, too, and tried to convince Mick to be his new Lucifer. Jagger turned down the role, but recorded some music for the film. Like the Beausoleil footage, Mick’s music was eventually used for Invocation of My Demon Brother. (Incidentally, 1968 is also the year that the Stones released “Sympathy for the Devil,” wherein the singer urges his listeners to “just call me Lucifer.”)

Beausoleil got tangled up with the Manson family, and on July 25, 1969 he stabbed to death Gary Hinman in what was the first of the infamous Manson Family murders. He was arrested two weeks later and has remained incarcerated ever since.

Ultimate Crowley collector Jimmy Page bought Boleskine House in 1970. A couple of years later he met Anger at a Crowley memorabilia auction and invited him up to the occultist’s old digs. Some reports claim that Page wanted Anger’s help getting rid of a ghost; regardless, the two bonded over their interest in Crowley, and thus struck up a relationship that found Page not only committed to providing the soundtrack to Anger’s flick, but also making a bearded cameo. Anger even lived in Page’s London mansion for a bit.

Page completed roughly 24 minutes of music most likely toward the end of 1973. An argument between Anger and Page’s wife in 1976 ended not only the Crowley fans’ friendship but also their working relationship. Anger removed Page from the project and allegedly placed a curse on him.

Beausoleil heard the news in prison and contacted Anger about creating a new score for Lucifer Rising. Both the filmmaker and the prison agreed, and the third and final score for the film was composed and recorded at Tracy Prison in California.

All of this was catnip to collectors. Fans of the occult wanted the lost Jimmy Page soundtrack as did Zeppelin fans, but in those pre-internet days such rarities were hard to come by. Enter Christopher Dietler, a member of the Ordo Templi Orientis, or OTO, a fraternal order closely associated with Crowley. Dietler met Anger at a showing of Lucifer Rising in Sacramento, California, and eventually persuaded Anger to sell him one of the film’s four prints. Dietler then cut a new audio master off of the film’s optical print and pressed 1,000 translucent blue copies of Kenneth Anger’s Lucifer Rising on his own label, Boleskine House Records. All 1,000 were meant to be hand signed with their own individual “Qabalistic Issue Number” on the back cover, but apparently not all were.

The record was released on January 9, 1987, with a retail price of $20. To my knowledge, Dietler was never sued by Page, Anger, or the OTO, who had entered into an agreement to re-release Anger’s films.

Beausoleil’s soundtrack saw official release, first on vinyl in 1981 and again on CD in 2005, but prior to the internet if one wanted to hear Page’s Lucifer Rising work, he or she either had to track down one of the 1,000 Boleskine House copies or a second (or third, or fourth) generation bootleg made from Deitler’s edition, which itself was several generations removed from the master tapes. That changed in 2012 when Jimmy Page released his own official version in 2012 via his website. Lucifer Rising and Other Sound Tracks was a limited edition that sold out quickly and was three minutes shorter than the Dietler version. We finally had an official version, but the Boleskine House edition remains the more complete representation.

As for the actual Boleskine House, that rambling haunted manor on the shore of Loch Ness, it caught fire in 2015. Damage estimates hover around 60% of the property lost, suggesting that the old place will likely be razed unless a new generation of wealthy Crowley fan is willing to invest in its restoration.

Whether you buy the blue vinyl Boleskine Press edition or the official copy released by Pagey himself, you’re looking at $100-$125 for a copy of Lucifer Rising. Beausoleil’s soundtrack trades for about 30 bucks on either CD or LP, with a 4 LP version selling in a range comparable to Page’s version. Happy hunting. 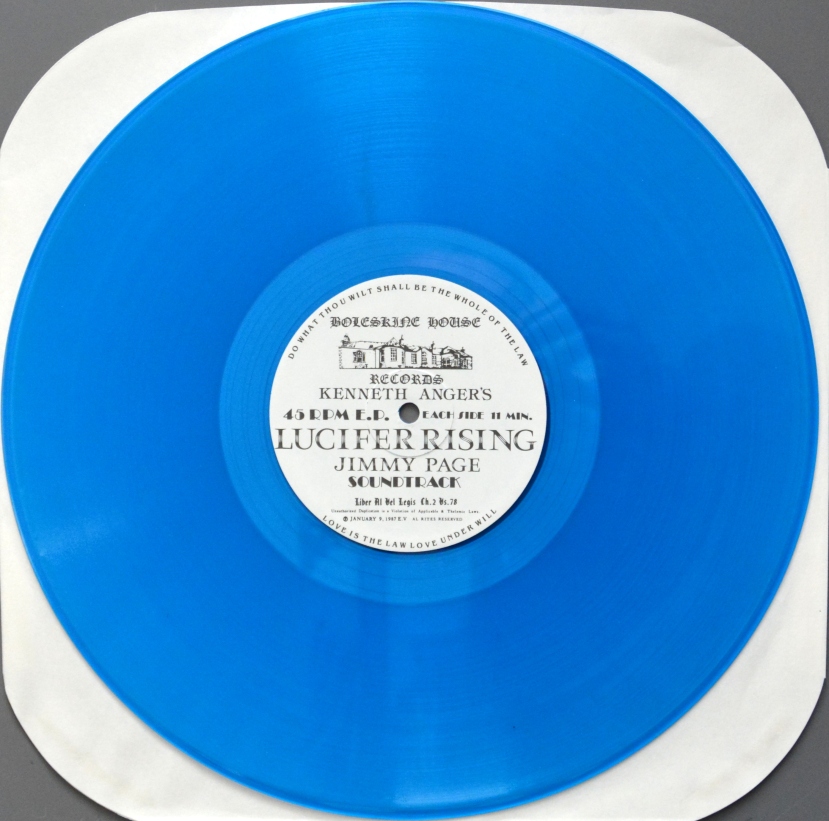 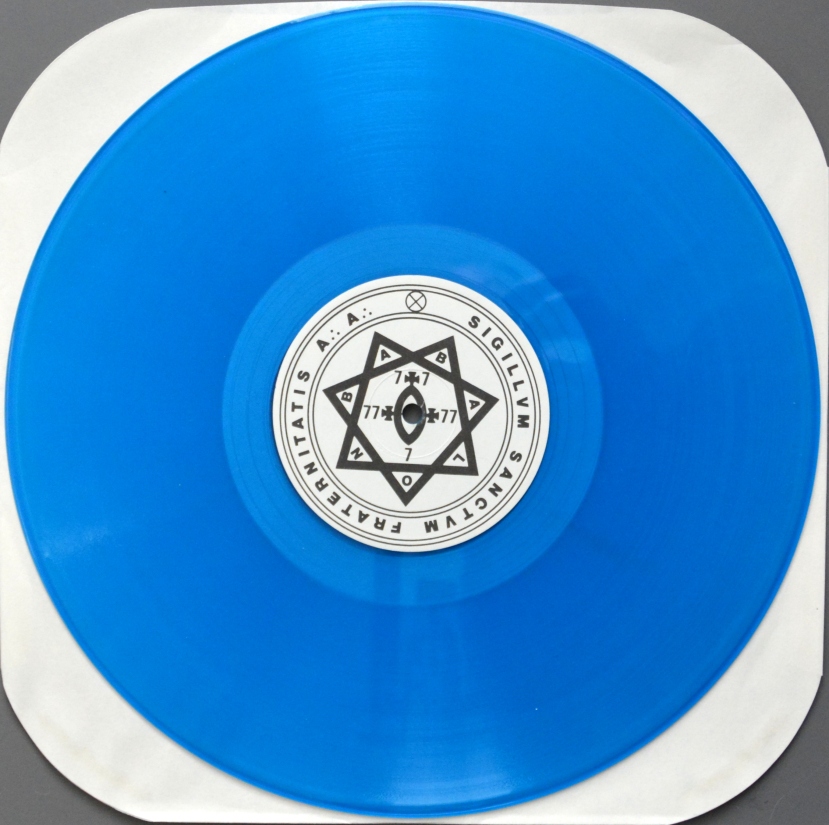 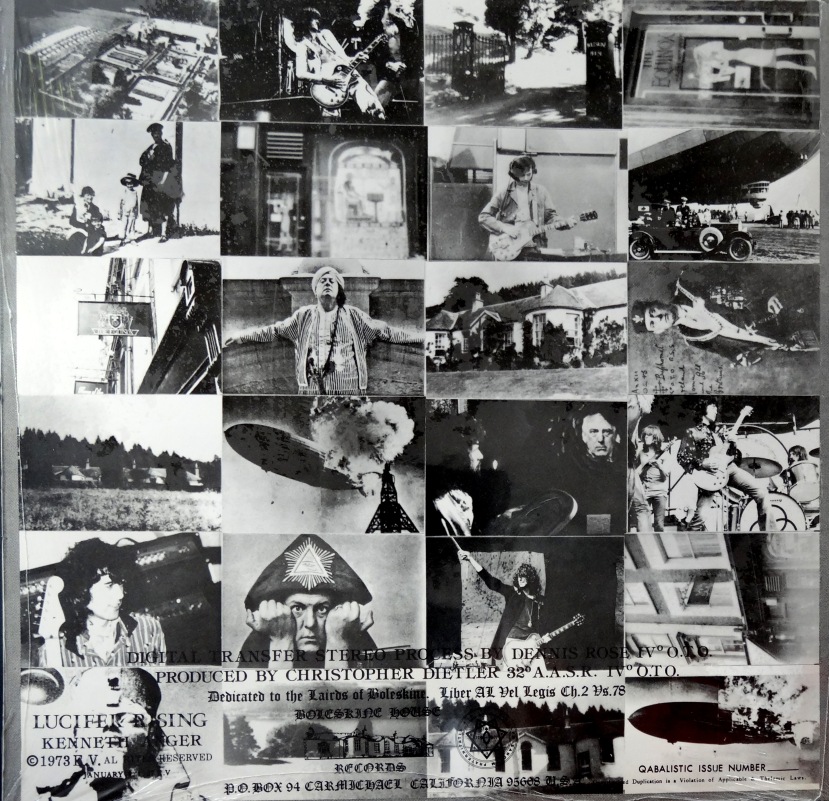