Cleaving To Gay Conservative Boils, or Fun With Language 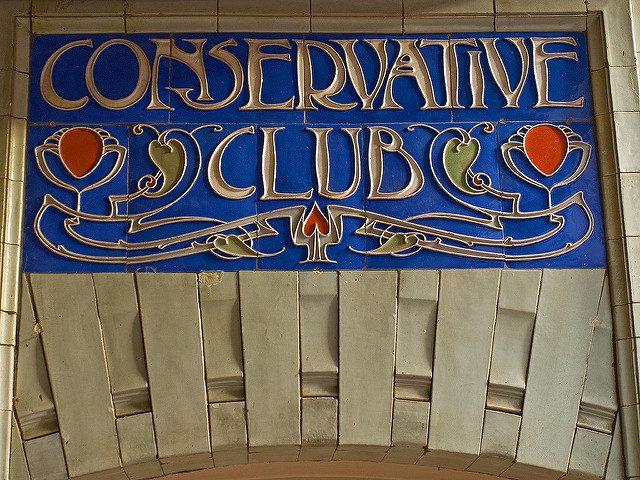 I am not a conservative, a personality defect which some friendly soul on social media is always eager to point out, often while reminding me that I’m a “libtard.” This is very confusing for me, as I think of myself as a relatively conservative person. Don’t misunderstand: I do not identify as a Republican, but conservative? Sure. I approach life in a fairly cautious, methodical manner. Impulse purchases rarely happen in the world of James, at least on big ticket items. I waited 25 years to buy my dream car, for example, and when I did it was with a zero interest loan, Blue Book for my trade in, and a purchase price barely over invoice. My investment strategy (meager as it is) is to buy and hold — day trading is for cowboys. If I were a Cool Whip and Country Crock kind of guy, my refrigerator would be filled with recycled tubs. Why throw away something so useful?

I conserve water, energy, family, stuff, traditions, and ideas. I am unlikely to fall for either  conspiracy theories or alternative cures, as I’m confident that the caution and rigor  of both good journalism and scientific method serve as bulwarks against lunacy. Politically speaking, I don’t want the government in anybody’s business more than they need to be, nor do I want to pay more than my fair share.  I’ve even considered purchasing seersucker, yet in today’s climate I am not considered conservative.

How is this possible? What does the word “conservative” mean, anyway? Words evolve over time, after all, sometimes so extremely that they become their own antonyms.  “Cleave” means both to stick to and to separate, though that’s actually not a very good example, as “cleave” and “cleave” are two completely separate words that just happen to be spelled and pronounced exactly alike in modern English. One has as its root the Old English word clifian, the other the Old English cleofan. Another example of this is the two distinct words spelled and pronounced “boil,” one meaning to heat and the other synonymous with pimple. If my boils boiled I wouldn’t have survived my teens.

The point here is that words haven’t always been used the way that we use them today. We think a dictionary’s purpose is to set the meaning of a word, but that’s incorrect; rather, dictionaries describe how words are used. This is an important distinction, especially for the villagers who break out the torches and pitchforks each year when fluffy “You Won’t Believe This Year’s New Dictionary Entries” articles make the rounds. “Zimzamflap isn’t a word!” they scream. “It doesn’t belong in the dictionary!” They are trying to conserve the language as they know it, but English is a very elastic beast. If people start peppering their conversations with zimzamflap (and I hope that they do), dictionary editors will eventually document its usage.

Maybe the secret to how I could be conservative without being a conservative could be found in the word’s usage over time. I turned to my Shorter Oxford English Dictionary, or SOED, petite cousin to the 20 volume, 22,000 page Oxford English Dictionary. One of my college professors called the OED a “dictionary of historic principle,” which is how I still think of it. If I want to know the etymology of a word–when it came into the English language, where it came from, etc.–I head to the OED. This undisputed heavyweight champ of dictionaries doesn’t stop at etymologies, though: Look up any word–“champ,” for example–and the OED will tell you how it was used at any given time during its English usage history. This may seem like overkill, but for scholars the OED is an essential resource. Something as familiar as the King James Bible takes on new meaning when its words’ Jacobean usages are restored.

The SOED is a bit confusing in this case, but if I’m reading correctly “conserve” entered English as a verb in the late 15th century. Its donor language was French, specifically conserver, meaning “to keep,” and its usage was synonymous with “preserve,” i.e., to make fruit into jelly for storage purposes. “We are going to conserve these quinces,” a 1400s English farmer may have said.

Another hundred years passed before “conserve” became a noun, this time its root cited as the Latin conserva. Of course, the French conserver also bore a Latin root, so this doesn’t mean much; regardless, if you’ve convinced yourself that conserve means “with service” in the same manner that con carne means “with meat,” you get points for creativity but you’re off base, so stop telling people that. Its earliest noun usage was “a preservative,” which then led to a usage synonymous with “preserve,” meaning a store or hoard, i.e., a wildlife preserve. It also jumped to that other synonym of preserve–stored fruit. In 1500s England one could acquire conserve to conserve conserves for one’s conserve, a sentence that made perfect sense.

Another hundred years passed, and “conserve” gained a new verb usage. Its cumulative use over two centuries had rendered it useful shorthand for “keep alive or flourishing” and “keep from harm, decay, loss, or waste, esp. with a view to later use; preserve with care.” This is your Cool Whip and Country Crock usage of conserve, the one that leaves conservatives-labeled-as-liberals scratching their heads over climate denial. Also in the 17th century “conserve” evolved the meaning “to keep or observe, as in commandments and customs.” I suppose this would be your “war on Christmas” flavor of conserve.

“Conservative” evolved right alongside “conserve,” the adjectival side car accompanying its more active partner. To identify something or someone as conservative was to say that he or she was inclined toward preservation. For 400 years, this remained the sole use of the word, making today’s dirty tree huggers and weepy dolphin savers die hard conservatives.

In mid-19th century England, the word took on a new usage. To call one a conservative no longer had to mean that he or she was “characterized by a tendency to…keep intact and unchanged.” Now the word also was a label denoting “of, supporting or characteristic of the Conservative Party of Great Britain.” The new usage quickly spread to other countries and their conservative parties.

That’s right: “Conservative” as used to identify an American political party is a border jumper, a filthy immigrant that successfully crossed the Atlantic five decades before Leo drifted away from Kate and sank beneath the icy surface. It’s also a linguistic kissing cousin to “gay,” a word whose contemporary usage some conservatives find objectionable because a small segment of the population claimed it as their own personal label. Grammatically speaking, one neither has to be homosexual to be happy nor a Republican to be conservative, yet those currently are the dominant usages of “gay” and “conservative” in the United States.

This was an a-ha moment for me. I no longer need to wonder how someone prone to storing fruit for the long winter ahead can object so vehemently to efforts to conserve the entire planet. Never again will I scratch my head over a person who should be supportive of conserving civil liberties enthusiastically trying to strip them away. I won’t have to watch in amazement as the conservative party burns through money like a bunch of drunken sailors on shore leave. Most importantly, I no longer have to wonder how I can be so damned conservative and yet so far removed from Republican dogma.

Because a conservative doesn’t need to be conservative any more than a boil needs to boil, and deep down in the cleft of my heart that leaves me feeling very gay.