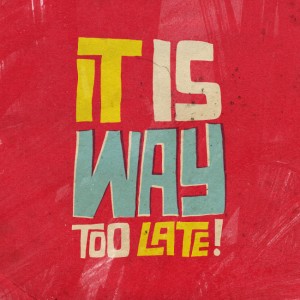 I missed my Monday deadline: No true tale of liquor, lust, and primer-gray Camaros for you this week.

I managed to get about half of a draft done, but that’s not enough. I was too late to get a story completed by deadline.

Lots of songs have been recorded about being too late. Queen’s “It’s Late” is a favorite of mine, as is Jim Carroll’s assertion that it’s too late to fall in love with Sharon Tate. Cute line, but what would he have done if her last name was Brownstein?

But those two cuts are “too late” lyrics. I have so many “late” songs in my playlist that for this “Deep Cuts” I limited myself to “too late” titles. Here we go:

“Too Late To Turn Back Now,” Cornelius Brothers with Sister Kate.

“Too Late For Love,” Def Leppard.

“It’s Not Too Late,” Dennis Wilson.

“Too Little, Too Late,” Dream Syndicate.

There you have it: Eight songs about being too late. I’m sure I missed a bunch, though I really did try to make it. What have I missed? I’m listening.