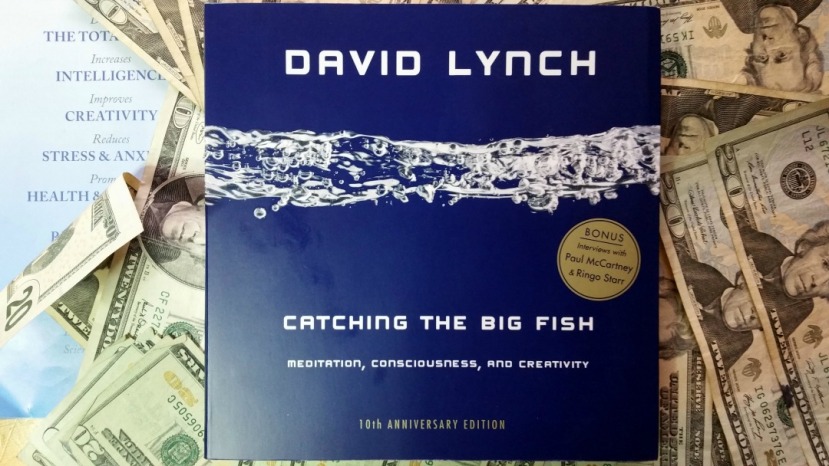 David Lynch ranks high on my list of creative types whom I admire. When he gets it right there’s no better filmmaker, and when he gets it wrong he’s still pretty damned interesting. What makes Lynch’s work so compelling is that it seems to come from some hidden place so deep that it is felt rather than understood. His best work is like a Dali painting in motion–fantastic universes that rigidly adhere to their own logic. They are dreams with soundtracks.

How does he get to that place? When I sit down to write, the result dribbles along the surface like a weak grounder–saccharine memoir, snarky commentary, superficial fiction. Occasionally I hit maybe a double, but those at-bats are rare and unpredictable. For the most part, I step up to the plate again and again, and I swing wildly at whatever idea comes my way.

Catching the Big Fish: Meditation, Consciousness, and Creativity promised answers. Lynch’s book on Transcendental Meditation’s relationship to creativity is a slim volume, easily read during a lunch hour. Some chapters are no more than one sentence platitudes like “The thing about meditation is: You become more and more you,” while the meatier sections put some shape to how meditation informs Lynch’s creative process.

Big Fish was not my introduction to meditation. That came 25 years ago, when like many creative types I immersed myself for a time in Buddhism. I remain a great admirer of that religion, but the rigor required for Buddhist meditation proved too much for my monkey mind. Lynch made TM sound like such an easy and inviting alternative to that style of meditation that upon first reading Big Fish a year or so ago, I jumped online and looked for classes in my area.

The first search result was a paid advertisement for TM’s official website, which immediately threw the needle on my bullshit detector into the red, but if I couldn’t trust the man behind Twin Peaks and Lost Highway then whom could I trust? I clicked the “Find TM In Your Area” link. This led to an “Attend Intro” link that noted that TM is “taught by a non-profit organization.” My BS needle retreated into the yellow.

I checked the schedule and saw that an intro session was planned for the following week at a local hotel. The idea of sitting in one of the Holiday Inn’s stacking plastic chairs while some stranger ran through a PowerPoint sales pitch tossed my needle back into the red. “What’s it going to take to get you into an inner consciousness today?” “But wait: If you act now, you’ll get this tote bag absolutely free.” “My manager is going to kill me, but I tell you what I’m going to do….” No thanks.

Fast forward another year, and I’m still trying and failing to reach the deep water. Maybe I am being too judgemental about that TM business, I think. Perhaps my bullshit detector is way off. We’re so inundated with hustlers every day, after all–miracle drugs, kitchen gadgets, remarkable sealants, political doublespeak, fake news–is it any wonder that I’m paranoid?  Surely David Lynch wouldn’t lie to me, though. I decide to give TM another look.

The next intro seminar is scheduled for my neighborhood library. That seems like a good sign. Lynch’s Twin Peaks returns for a long overdue third season, and Turner Classic Movies runs Eraserhead. I realize that exactly half of my life has been circling meditation’s fence, looking for the gate. I’m not one for signs, but everything seems to be pointing toward this being the moment that I finally move toward deep water, so I sign up for the intro seminar.

The day arrives. I get to the library early, sit and write across from a lady who is working on one of the facility’s computers. She calls a librarian over to show her how to save a document. “Is that going to the Cloud? I don’t want that in the Cloud. What is the Cloud, anyway?”

“You can save it to your Google Docs–”

The library is small-a suburban branch consisting of a few tables, a couple of PCs, and a few dozen shelves filled with books. I can’t envision where this seminar will occur, maybe in the Cloud. “The library will close in 15 minutes. If you need to call for a ride, now is the time,” the librarian announces.

“Over there,” he says, and he points to the library’s equivalent to the Holiday Inn’s conference room. I drift over and park myself in a molded plastic chair facing a giant “Intro To TM” PowerPoint slide. A dozen or so identical chairs face the screen. People fill in around me: two pairs of female friends, two married couples, a father and his teen-aged son, a middle-aged man who looks like he stopped in on his way to a Jimmy Buffett concert, a middle-aged women who has to be sporting a Kokopelli tattoo somewhere underneath her J. Jill ensemble.

For 45 minutes we sit in our molded plastic chairs and listen to a tag team presentation on Transcendental Meditation. The presenters show us charts that allegedly provide irrefutable scientific evidence of this or that. They cite studies, some decades old. Health benefits are touted, not-quite-promises are made: We can add 12 years to our lives; we can reverse heart disease; we can cure ourselves of diabetes; we can rid ourselves of antidepressants; we can bring about world peace. Repeatedly our hosts assure us that TM is easy (“If you can think, you can meditate”) and most definitely not a religion, that once we’ve learned the secrets we’re in for life provided we never forget our mantras.

“We’re almost out of time here,” one of the tag team partners says. “You’re probably wondering what the next steps are. Instruction takes place over four one hour sessions. The price is 960 dollars. You can pay that all at once or in installments.”

“Wait a second. If this is so easy then why do I need to pay you a thousand bucks?” The Parrot Head asks.

“We want you to have a good meditation experience” is the answer.

“I thought you said this is a non-profit,” J. Jill says.

“That’s right–the foundation is a non-profit.”

“Then who gets the money, you?”

“Well yes, we get paid for our time, but the money goes to lots of things. You may have heard about the work we do in schools, for example. A lot of it goes to those scholarships.”

“I need a scholarship. I’m unemployed,” somebody says.

“We can talk about that.”

“What about family discounts?”

“We can talk about that, too. If you’re interested in continuing, just come on over here and fill out one of these survey forms….”

They all stand and walk to the little side table where the forms await their personal info, all $11,520 of them. I don’t stick around to see whether the closers get their coffee.

I’m not sure what to do with any of this. I believe that people should be paid for their services, and I understand that even non-profits need to cover their overhead, but when inner peace is marketed like non-stick cookware, my guard goes up.

I don’t believe that the TM tag team were hustlers, nor do I think that David Lynch is some sort of Transcendental grifter. As individuals they all seem honest and sincere, and I trust that they’ve genuinely reached the deep water. However, something about that organization–or at least that specific introduction to that organization–simply didn’t feel right. It felt less like one of my Buddhist friends talking to me about his experience and more like the Scientologists on Hollywood Boulevard who were always trying to coax me inside for a “free personality test.”

And so the deep water remains out there on the horizon. I’ll keep skipping along on the surface with my fountain pen for now, hoping to luck into a big fish now and then while I wait for a scenario that doesn’t make me feel like the catch of the day.