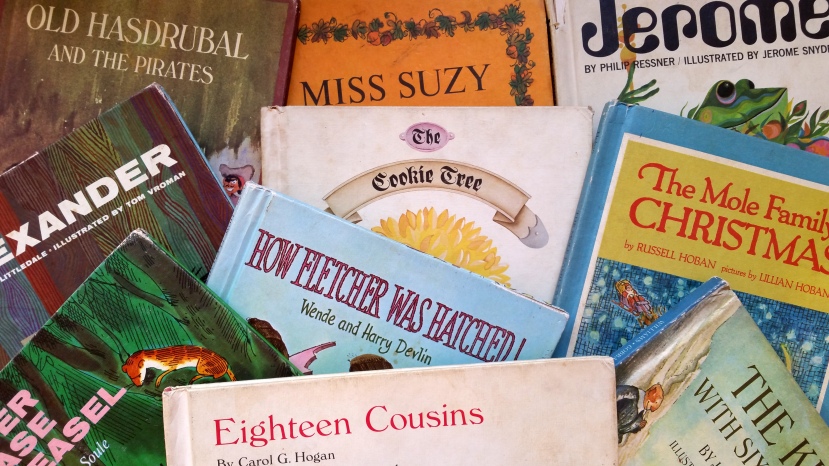 That sounds precocious, and if I were a writer of any merit perhaps it would be. But I’m not and it isn’t, because the truth of the matter is that my first literary effort was a childish game of mimicry inspired by a bedtime story.

I am the youngest of three children. Five years separate me from my oldest sister. At this point in our lives a half decade means nothing, but as young children five years represented a socio-cultural chasm. When my eldest sibling entered her last year of grade school I entered my first. Our needs and interests couldn’t have been more different.

We had much in common, of course, not the least of which was a mother of the endangered variety. Ours was a stay at home mom whose life revolved around her three children, at least as far as we knew. PTA, Girl Scouts–all of our mother’s extracurricular activities involved us. Even her actual, pre-child extracurricular activities involved us: Mom cut her high school cheerleading skirt into bits and reassembled them into a smart, wool sport coat for the toddler version of me.

That five year age difference meant that many of her parenting rituals were well established long before I came along. I simply attached to these like the caboose of a toy train being dragged around a preestablished oval. Thus I ended up attending Girl Scout camp, playing beneath her ironing board while she worked, and watching Days of Our Lives and Jeopardy with host Art Fleming each afternoon.

The bedtime ritual consisted of convening in the girls’ bedroom, my mother, sisters, and me, for story time. The children rotated nights, each selecting an illustrated story from our small collection of books published by Parents’ Magazine Press. We lined up along the edge of my sister’s lower bunk, our mother seated between us, and we listened intently while she read.

She was a fantastic reader, by the way, one who wouldn’t get too locked into the singsong cadence of a verse and would never let a character speak as flatly as his or her words appeared on the page. Mom didn’t read so much as she performed. Words mattered to her, but more so in an emotional than an intellectual way. Finding the right emphasis was to articulate the emotional truth of The Cookie Tree or How Fletcher Was Hatched.

When I was a teenager she brought home a little book that excited her to no end. The book contained a single sentence, repeated page after page with emphasis on a different word:

Its punchline, if one can call it that, was equal stress on every word: People are more important than things. She loved that little book, presumably for its combination of simple truth and simple fun with spoken English. It was the last book she ever read aloud to me.

We left the little house with the bunk beds in the girls’ bedroom just after my eldest sibling finished grade school. We left behind the bunk beds, too, and the PTA meetings and the afternoons with Jeopardy featuring host Art Fleming. My mother’s little family was growing up, as demonstrated by her oldest trotting off to junior high school. Bedtime stories were for little kids so that, too, was left behind.

But I remained a little kid trailing a half decade behind the pace. My bed was still shaped like a race car, my prevailing interests Evel Knievel, baseball cards, and Looney Tunes.  It took her a couple of years, but Our Mother of the Emotional Truth eventually realized what she had done. “When your sisters got too old to read to, I didn’t think about the fact that maybe you weren’t,” she said to me. “Do you want to start reading together again at bedtime?”

By then I was nine years old–a man of the world, nearly double digits. I was much too mature for Old Black Witch and Just Only John, but even at that young age I was able to pick up the subtext. My mother needed a child, just for a little while longer. People are more important than things.

And so bedtime stories resumed, this time in my own bed, an audience of one for my mother’s theatrical interpretations.  The picture books remained on their shelf, though. Instead we read age appropriate chapter books of that era: The Borrowers, The Mad Scientists’ Club, A Wrinkle In Time. She particularly enjoyed that one, with its message of love as a universal force.

I enjoyed this time together. I enjoyed the stories, but more so I enjoyed the undivided attention of my mother. A  child with two siblings doesn’t score such a windfall  too often.

We didn’t read too many age appropriate books before she upped the ante. Maybe Mom grew bored with the simple plots and the simpler dialog, or maybe she thought that I was more than I was. While I was at best an average student, each school year my teacher pegged me as an advanced reader. Perhaps my mother felt an obligation to feed that particular beast. Maybe she just thought I’d enjoy something different.

Whatever the reason, her next selection was David Copperfield, Dickens’s autobiographical novel. During my own reading time at that age, I was obsessed with biographies. If library books sill held little pockets glued to their end papers and if Tarver Rendon Elementary school preserved the same books in their stacks for forty years, one could find the name “Jimmy Stafford” in a clumsy, illegible cursive repeated over and over in books about Einstein, Edison, Henry Ford, the Wright Brothers, Abe Lincoln, Johnny Unitas, Brooks Robinson, Paul Revere and the Raiders, on and on. The subject of the biography never mattered to me because biography itself was all that mattered. I loved stories about people.

Maybe that’s what made my mother think that David Copperfield would make a good bedtime story. Each night she sat and read, and I dozed off in my race car bed until she barked at me to wake up because she wasn’t reading for her but rather for me and if I wasn’t going to pay attention then she had plenty of other things that she could be doing. I tried to stay awake, I really did, but David Copperfield was boring.

But the idea of autobiographical fiction–that fascinated me. Stories about people that weren’t necessarily true, but true-ish: For whatever reason that notion struck me as the highest form of literary art. I rolled a piece of paper into my mother’s typewriter and began work on my own Dickensian autobiographical novel. At nine years old, one neither has many experiences to fictionalize nor the skills to do so. My own David Copperfield topped out at two typewritten pages, about 500 words that I carried in my pocket for several weeks for fear that someone would find and read them.

We moved again not too long after that, and again routine and ritual were disrupted. David Copperfield marked the last bedtime story my mother ever read to me.

I wish I could say that the whole David Copperfield incident marks the moment that I knew I was a writer, but it doesn’t. I knocked out a few stories before my childhood came to a legal end, but only in the context of classwork and rarely with anything resembling success. Regardless, I believe that those evenings listening while my mother read David Copperfield planted the seed. Many years passed before it germinated.

What’s interesting to me is how closely as a reader I’ve stayed on course since that age. All of my favorite writers–Twain, Kerouac, Thompson, Vonnegut, Fante, Miller, Bukowski–wrote about themselves, in some cases exclusively. I have no patience for plot-centric stories that read like a marble tumbling predictably through a wooden maze, nor do I have any interest in elaborately constructed worlds filled with minutiae I must remember in order to follow the story. People are more important than things. It’s true in life, and it’s true in stories.

My mother is gone now, and I doubt she ever knew how much those evenings meant to me, or what course of events she set in motion simply by reading a story. I know those evenings were important to her, however. Before she died she had amassed an entire closetful of Parents’ Magazine Press books, the same illustrated stories she read to her children before they grew too old to listen. Multiple copies of Jerome or Miss Suzy or whatever simply meant that she could leave a copy to each of us, and then to our children, and on and on until her closet was empty and many bedroom shelves were full. It was a closet full of things she gathered for people who were more important.