From The Stacks: Van Halen, ‘Women and Children First’

Maybe it’s one of those “you had to be there” kind of things, but in the late ’70s and early ’80s there simply wasn’t another band like the mighty Van Halen. Edward’s guitar heroics literally changed the sound of hard rock and heavy metal, almost overnight transforming a bunch of distorted 12 bar blues players into distorted meedly meedly meedly finger tappers. Brother Alex’s drum sound was tight, clean, and as heavy as that of the gods who came before him. Michael Anthony played bass.

Okay, that was a little unfair. Anthony’s vocal harmonies were the perfect foil to David Lee Roth’s “Whoo! Wowow! Wheee!” campy vocals. Perhaps no song in the VH catalog captures all of the above better than “In A Simple Rhyme:”

Did I mention Diamond Dave? The front man’s front man. Mr. Showmanship. The world’s greatest Jim Dandy impersonator. Dave was all swagger, Tae Kwon Do, and six-pack abs. He had the best hair in the game and the best stage patter, too. 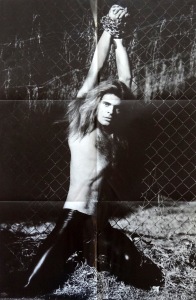 When Women and Children First, their third album, dropped, my local record store stuck a giant cardboard standee in the front window. The thing must have been five feet tall, and it got the job done: As soon as I saw that there was a new Van Halen album out, I laid down my $7.99 and ran home as fast I could to throw it on the turntable. From opening track “And the Cradle Rock” to the untitled outro known these days as “Growth,” Women and Children First was the sound of a conquering army taking down Godzilla. I wasn’t disappointed, and neither was any Guy In Black T-Shirt Who Jams at my junior high school.

And then there was the enclosed poster. What the hell is a 13 year-old dude circa 1980 supposed to do with a giant poster of a shirtless David Lee Roth chained up bondage-style? Queen’s Jazz poster featured naked ladies on bicycles. Now that was a freebie I could get behind, but this?

Well, it probably wasn’t meant for me. What made Van Halen the biggest hard rock band in the world is that there was a little something  for everybody, including the ladies. Dave even told us as much at the beginning of “Ice Cream Man” on their debut album.

The good news for me is that means that unlike my Jazz poster, this one has no staple marks or tape-stained corners. Diamond Dave remains in mint condition in all of his nuthuggers-and-chains glory. Taking this out for photos was probably the first time this poster has been unfolded since 1980, and it’s probably the last, too.

Women and Children First is not by any means a rare album. The record went triple platinum, after all–that’s three million sold. Even if only a third of those were vinyl copies that’s still a million records floating around. However, if you find a clean copy with the poster intact, you’re probably looking at around a $20 purchase. Whoo! Wowow! Happy hunting.