The Reason We Put Shape To Things 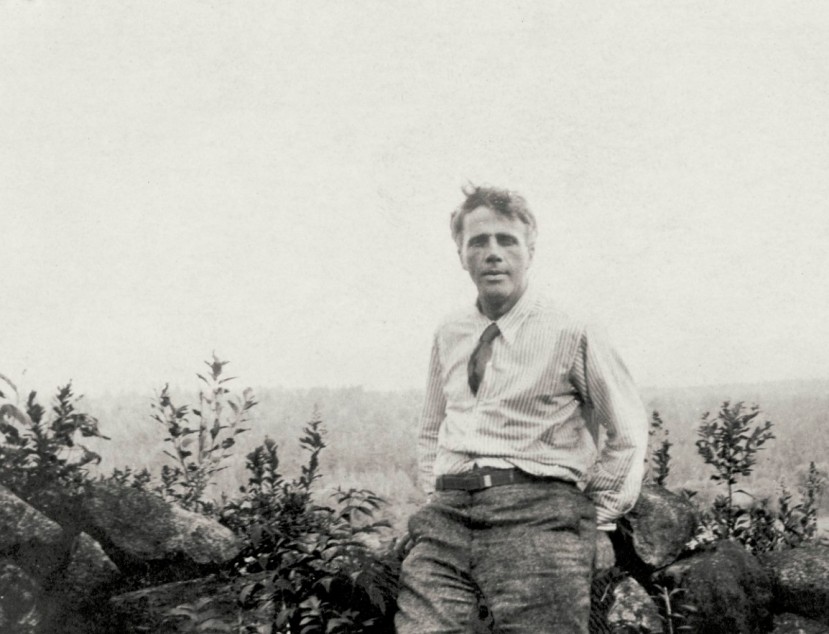 I recently watched Robert Frost: A Lover’s Quarrel with the World, a 1963 documentary about America’s greatest poet who isn’t Nipsey Russell. (That joke was an age test. How’d you do?) Frost was at the very end of his life during the making of the film, and he looked every minute of his 88 years while pushing a wheelbarrow or charming rooms full of undergraduates. He charmed me, too.

Eighty-eight years. The grownups of Frost’s childhood witnessed the Civil War, and Frost as an adult saw the rise of the automobile and the invention of the airplane. The man was born into a horse and buggy world and died in a nuclear age where men in glorified milk cans tumble through the space: John Henry to John Glenn in the span of one person’s lifetime. Granted, I have miles to go before I sleep, to steal a line from the man himself, but I think the greatest technological leap during my lifetime is toilet paper with a touch of soothing lotion. Science!

I’ve never been a big admirer of Frost’s work. I know the poems that you know–“The Road Not Taken,” “Mending Wall,” “Stopping By Woods On A Snowy Evening.” I know them, but they’ve never resonated with me; in fact, I can’t remember any poem delivering the sort of transformational gut shot that my favorite prose delivers. That’s no fault of the poets or their work, but rather reflective of my provincial tastes. I’m simply not sophisticated enough for poetry.

As an undergraduate English major, ample opportunity presented itself for me to overcome this personal shortcoming. All of the major poets were laid out for me, and in abundance: Milton, Donne, Keats, Shakespeare, Yeats, Burns, Tennyson, Blake, Hopkins, Rossetti. Even modern poets like Eliot, Pound, Hughes, and Heaney were served up, their work analyzed, dissected, torn to pieces and reassembled. I learned the mechanics of poetry much in the same manner that another student may have learned how to overhaul a motorcycle engine, but without the fingernail grease or post-graduation job opportunities.

I realized that poetry wasn’t for me on my first day in my first class as an English major. The professor was a Renaissance scholar, a fact that he mentioned repeatedly, who had no time for the “pulp fiction you kids like so much.” Life was too short and the Western canon too vast to waste time reading for pleasure, but not to worry: He was going to save us from our dreary, stupid lives. After belittling William Carlos Williams for having the audacity not to be Shakespeare or Donne, Professor Windbag read “This is Just to Say” aloud:

that were in the icebox

“Isn’t that marvelous?” he said from his perch on the desk at the front of the room, where he sat with his legs crossed and his back resting against the thick padding of his ego. “What’s going on in this poem?” he asked. The class remained silent, as all undergraduates in their first class on their first day tend to do. “Anybody?”

I felt bad for the sumbitch, sitting there in front of all of those young people, some frightened, some bored, some simply without any opinion to offer. He was trying to draw us out of our shells, get a conversation started. I imagined myself standing in front of a classroom, my frozen smile battling for climate superiority with the flop sweat pouring from my reddened forehead. I hoped to teach once this English major business was completed; after all, no motorcycle mechanic job awaited me.

“I can imagine it as an indirect apology note,” I said. “It’s like a note stuck to a refrigerator door the morning after an argument, one that pretends to be about plums but is really about something bigger. That open-ended title, ‘This Is Just To Say,’ the speaker is using the excuse of plums to say ‘I love you’ or ‘I’m sorry,’ or something like that.”

The professor let my comments hang in the air for a moment before settling gently to the ground, and then he said: “No. None of that is correct. Absolutely nothing you just said appears anywhere on the page. It is a poem about plums that were in the icebox that have been eaten. They were sweet and cold. Why do you undergraduates insist on trying to find this juvenile symbolism in everything? Is this how they teach literature in public schools?”

It was a great lesson in intentional fallacy, the mistake we often make as readers of assuming we know what the author intended. This was also a great lesson in critical reading and analysis, in limiting my arguments to that which can be supported by the text on the page. I also learned how to shut up a roomful of students for an entire semester. Nobody dared to offer an opinion after that, and why should they? The risk of being skewered in front of their peers was high and the benefits were nonexistent.

Perhaps most importantly, what that brief exchange accomplished was the coldblooded assassination of the pleasure of poetry. I heard loud and clear that I was not supposed to participate in the story, that it was to remain mummified and two-dimensional on the page, black and white, poem and reader. Maybe that’s how motorcycle mechanics feel, too. Maybe after taking apart a thousand engines the magic of the machine vanishes and all that remains are parts, I don’t know.

That’s what poems remained for the rest of my tenure as an undergraduate: machines, problems to be understood, intermeshing gears to be measured, oiled, and assembled. Learn the names, learn the forms, admire the greatness of the smooth running machines.  A life dedicated to poetry seemed frivolous. Poetry doesn’t hold much fiscal value in our culture, and if plums have to be plums then poems are no better than prose for communicating emotional truth.

So why did I recently watch a 55 year-old Robert Frost documentary? Obligation, I guess. It was was on, I’m a writer, and I knew no more about Robert Frost than you do. An opportunity to learn a bit more about the man behind “Nothing Gold Can Stay” shouldn’t be dismissed. Stay gold, Ponyboy!

I think Frost would have disagreed with the methods of the professor who sucked all of the joy out of poetry. “There are two kinds of teachers: the kind that fill you with so much quail shot that you can’t move, and the kind that just gives you a little prod behind and you jump to the skies,” he once said, and another: “The person who spends his time criticizing the play around him will never write poetry. He will write criticism….”

But that’s no matter. It’s another quote of Frost’s that led me down this little rabbit hole, one that I failed to capture and unfortunately can’t find online. Somewhat late in the film, Frost offers that poetry is a kind of medicine not for the reader but for the poet. Those are not his words but rather mine, but that’s the gist. He didn’t launch into a flowery explanation involving spirits and muses, but rather explained that putting form to something creates a sense of order. He suggested that psychoanalysis is no match for the power of simply creating something.

That really resonated with me. I thought about my own writing life–how mentally restless I feel when I’m not writing and how much calmer overall I feel when I am. That same feeling is present when I draw, build a bicycle, sort my records, or cut the grass. I’d imagine that the ghostly motorcycle mechanic who has been haunting this essay probably feels the same way when he turns a box of parts into a functioning machine.

Putting form to something, creating order in a disorderly universe–that’s what art is all about. That’s what being alive is all about, really.