From The Stacks: Moon Martin, ‘Escape From Domination’

I’m kind of fascinated by Moon Martin, and I have been for forty years.

I can’t really call myself a fan: Of Martin’s ten or so albums, this is the only one I own. It’s a good record, and I’m sure the other nine are, too, but I never remember to check the racks for him when I hit the record stores. I like Moon Martin, but “fan” might be pushing it a little bit.

Regardless, I am fascinated by the dude, and it all goes back to late night television. When I was a kid in those pre-MTV days, I’d watch any show that featured music: The Midnight Special, Don Kirshner’s Rock Concert, Saturday Night Live–even the talk and variety shows. What was really cool about those shows during the late ’70s was that genres were very much in flux. Post punk/new wave and what we now call classic rock might appear on the same show as a funk, disco, or top 40 band–or even country. If you tuned into The Midnight Special during 1978, you might have seen the Cars, Rick James, The Trammps, or Aerosmith. Come on!

So one night I’m watching something–I swear it was Midnight Special but the internet disagrees–and Moon Martin comes on screen.

The Robert Palmer version of “Bad Case of Loving You” was already a hit on the night I first saw that clip, so my first thought was “Who is this geek ripping off Robert Palmer? I had no idea that it was the other way around: Palmer’s version was the cover song.

My next thought, though, was “He’s pretty cool,” so on my next visit to Record Bar I picked up Moon Martin’s latest, and that’s what you see right here. Escape From Domination, released in 1979, was Martin’s sophomore effort, but it wasn’t his last: The singer-songwriter released seven more studio albums during the ’80s and ’90s.

You can pick up your own copy for only a couple of bucks. Happy hunting. 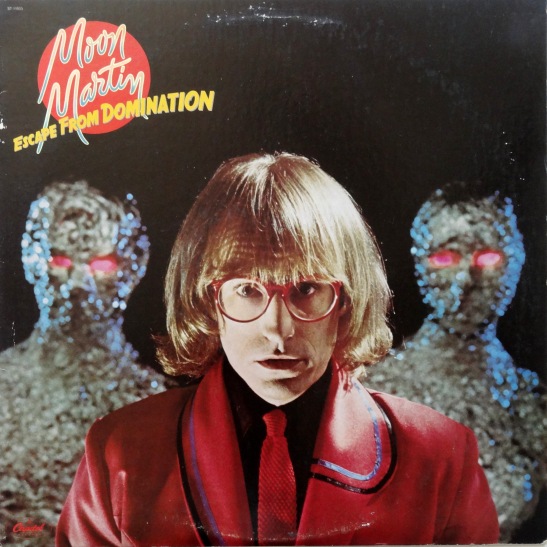