The Man Who Vanished 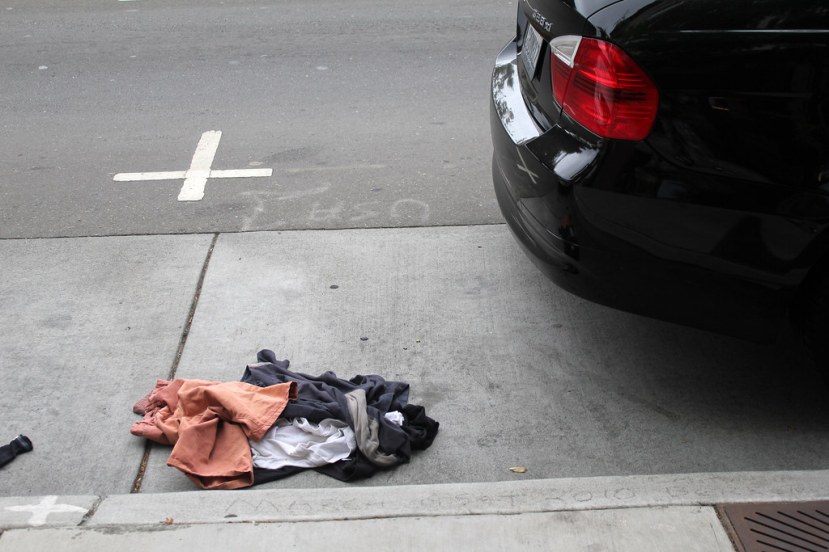 David Wilton awoke that Tuesday morning to find that his left ear was missing.

At first, of course, he assumed nothing more than a head cold, allergies, or perhaps an inner ear infection, but when he approached the bathroom vanity to brush his teeth he saw smooth pink flesh where his ear used to be.

“Sophie, I’ve lost my ear,” David said, but Sophie did not respond. Twenty-three years of marriage had long deadened any interest she once had in her husband’s morning scramble to find this or that. Besides, she had her own morning routine to consider, and she was already running late. David rushed from the bathroom to the entryway, where Sophie stood in the doorway. “I’ve lost my ear,” he repeated.

“Sorry, I’m sure it will show up. Have you retraced your steps?” she said, and she closed and locked the door behind her.

David showered and dressed, combed his hair as best he could to cover the baby pink patch of skin. Once on the freeway he tried to call his doctor from the car, but the Bluetooth wouldn’t sync. Technology is great when it works, he thought, but what a mess when it doesn’t. As if to prove the point, an SUV swerved violently into his lane, and his car’s self-braking system reacted immediately. “Don’t you look before you change lanes,” he shouted, but alone in his car with the windows closed the question was at best rhetorical.

His first stop at the office was a visit to Robert, his manager of 15 years. “Hey, I just wanted to let you know that I’m going to try to get a doctor’s appointment for this afternoon, so I might be headed out a little early.”

Robert did not look away from his computer. “Everything okay?”

“Well, whatever you need. If we don’t have our health what do we have, right Dan?” Robert said.

David settled into his cubicle. While he waited for his computer to boot up, he dialed the phone.

“I need to make an appointment to see the doctor, please.”

“Reason for your visit?”

“You mean you’ve lost your hearing. Would you like a referral to an ENT?”

“No, I haven’t lost my hearing. I can hear you just fine. I woke up this morning and my left ear was gone.”

“That’s why I would like to see the doctor.”

There was a long moment of silence, and then the person on the other end of the line said, “Patient name?”

Another long silence. “I’m sorry, Doctor Rayback doesn’t have a patient by that name. New patients need to schedule a first visit, and that takes around eight weeks.”

“No, I’ve been Rayback’s patient for the last eleven years.”

“I’m sorry, sir, you aren’t in our system. Would you like me to set up a first visit?”

“Maybe you didn’t hear me. I woke up and discovered that my ear is missing.”

“If you feel that this is an emergency, please hang up and dial 9-1-1 or proceed to the nearest emergency room,” the voice on the phone monotoned, followed by the familiar click of a disconnecting line.

“Everything okay?” Randall asked. The two co-workers had shared a cubicle since David started at the company 22 years earlier.

“I don’t know.” David could not login to his work computer. He opened a support ticket with the company help desk. His shoe felt oddly loose, so he removed it to tighten the lace. The gold-stitched toe of his black sock sagged pathetically. He rolled the sock off and revealed his Uncle Carl’s foot. It wasn’t really Carl’s foot, but the toes were missing just like his uncle’s. His foot looked like a flesh pink chayote squash. He quickly replaced the sock and shoe and hobbled down the hallway to Robert’s office.

Back home in the safety of his own bed, covers drawn and lights off, David logged into his social media account and typed this message: “Do you ever feel like you’re vanishing?” He stared at the screen, waiting for a response. Eventually he drifted off to sleep without so much as a like.

Matthew’s voice startled his father awake. “That you, Matt? I’m upstairs.” David reached for the sheets only to discover that his hands were gone. He shoved the stumps beneath the covers.

“Not feeling too well, I guess.”

“Sucks. Hey, I’m a little short until payday and my power bill is due. Can I borrow twenty bucks?”

“My wallet’s right there on the dresser. Everything okay? How’s work?”

Matt rifled through his father’s wallet. “Killing me. I haven’t had a day off in three weeks…” For the next five minutes the young man spoke in one uninterrupted sentence about work, school, roommates, girlfriends, punctuated with, “…anyway, I have to get going.”

“Where are you headed?”

“Meeting Mom for dinner. I haven’t seen her in a week.”

“You haven’t seen me in a week, either,” David said.

David tried without success to get Siri to dial 9-1-1. After twenty minutes of effort he managed to get the front door open. He limped toward the hospital, a walk he estimated around five miles. He walked along the curb, hoping that a passing motorist might offer him a ride, but the cars rushed past as if he were invisible. He made it to Blake’s Landing, the strip mall just outside of his neighborhood, before his right leg vanished and David toppled onto the sidewalk in front of Starbucks. People stepped over and around him. “Somebody, please help me,” he said.

“Get a job,” a passerby muttered.

Sophie returned home from dinner to an empty house. She poured herself a glass of wine and turned on the television. Across town, Matt and his roommate settled in for a little Red Dead Redemption. In front of the Starbucks at Blake’s Landing, David resembled a CPR dummy dressed business casual, empty pant legs and shirt sleeves contorted like mangled limbs, his face featureless but for a pair of rubbery lips fixed in a permanent gasp.

On Wednesday morning, Randall knocked on Robert’s office door. “Yeah, what can I do you for?”

“Hey, sorry to bother you, but have you heard from David?”

“Do you know who I’m talking about?”

“I guess not,” Randall replied.

Over at Blake’s Landing, Sophie stepped over a pile of dirty clothes and pulled open the glass door. “Welcome to Starbucks, what can I get started for you?” the barrista chirped.

“Somebody should clean that up,” Sophie said, and she pointed at the pile of clothing on the sidewalk.

“I know,” the barrista said. “People just walk by like it isn’t even there.”

“I don’t know how they live with themselves. I know I couldn’t,” Sophie said. She slipped a five into the tip jar and congratulated herself for making the stranger feel so valuable.