From The Stacks: Queen Cassette Singles 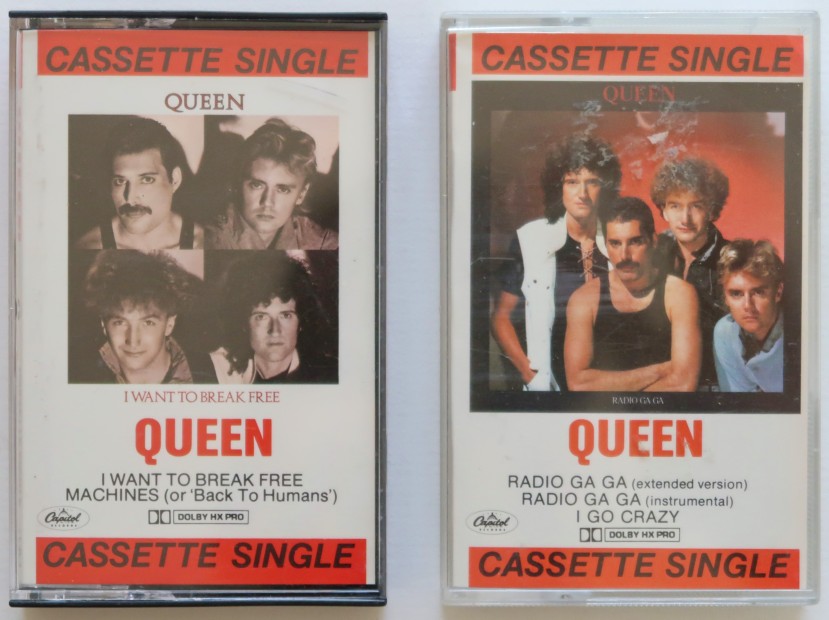 The cassette single was a stupid format, and that’s what makes it interesting.

RCA developed the 7-inch 45 RPM single back in the 1940s specifically with the auto-changer in mind. The notion was that listeners could put a stack of singles in the order of their choice, load them onto their turntables’ auto-changers, and let them play. This was the playlist’s great granddaddy, and for three decades it was pretty much the only game in town.

The Walkman and the boom box changed that in the ’80s. The compact cassette format, what we all think of as a cassette or tape, had been around since the early ’60s, but it wasn’t until the Reagan era that kids could afford the combination of portability and audio fidelity that the Walkman introduced. Back in the ’80s you had a Walkman or a boom box, or you had a best friend who let you borrow his or her Walkman and boom box. Just like that the cassette was the next big thing.

The cassette revolution gave birth to the playlist’s grandaddy, the mix tape, and the record industry could have embraced this change. They could have slashed the prices of 7-inch singles, or thrown in a free cassette with every 20 purchased, or something, but they didn’t. Instead they played a sort of offensive defense. They launched marketing campaigns that insisted that taping music was stealing, and when those weren’t effective they tried to earn royalties off of every blank tape sold. They did everything but adapt, a mistake they’d repeat again a few years later when Napster became the next big thing.

Well, that’s not entirely fair. The record labels tried to adapt to the cassette era. “If kids are buying tapes instead of 45s, then we should sell cassette singles,” some genius declared, completely missing the “playlist” convenience of both formats. (When compact discs began dominating the market a few years later, this same hypothetical genius introduced the CD single, though in all fairness to Mr. Idea Man multi-disc changers were fairly common. Let’s call five CD changer loaded with singles the stepdaddy of the playlist.)

Thus was born the format oddity that is the cassette single, or cassingle. They are the VHS tapes of record collecting, only not as popular. Full-length cassettes are enjoying a bit of a revival, but not the lowly cassingle. Nobody cares about them. In the last decade a couple of bands have released cassette singles, perhaps nostagically but probably ironically, but beyond that the format is as dead as the shellac 10-inch records that the 7-inch single replaced.

The fact that nobody wants cassingles is exactly why I want them. Don’t get me wrong–I’m not out there looking for Debbie Gibson cassingles, but if I come across one from a band that I like I always scoop it up. Your basic Queen fan might have all of the band’s albums, but cassette singles? Probably not, and that’s what makes these a great conversation piece.

Expect to pay a buck or less for most cassingles, but take the phrase “nobody wants them” with a grain of salt. There are some cassette singles out there that fetch over $100, but most are relegated to the Island of Misfit Toys. Happy hunting.