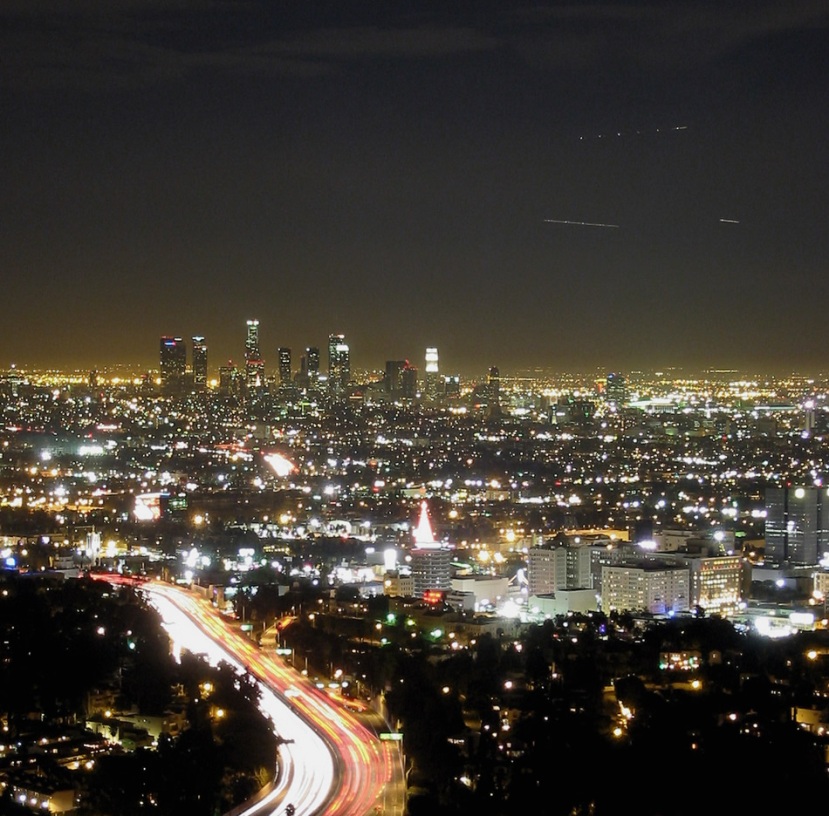 One afternoon while we were organizing the cassette wall I learned the secret to Theresa’s celebrity indifference. A well known television actor walked up to her, and before he could ask for help she said, “Oh, hi Daddy. This is my friend, Cool.”

The TV star extended his hand and said, “Well hello, Cool, I’m pleased to meet you.”

“Theresa, your mother and I are going out for the evening. Here’s some money for dinner.”

“Okay, Daddy,” she said. She kissed him on the cheek and he left.

“Why’d you tell him my name is Cool?”

We went back to racking cassettes while I grilled Theresa. Why are you working a minimum wage job? What’s the deal with the beater BMW? What do you mean your life is like everybody else’s?

“Where are you going?” Jody asked.

“Just hanging out with some friends from the record store,” I said.

“I don’t trust that Betty. She likes you.”

“You don’t see how she looks at you,” Jody said.

“Betty has a boyfriend.”

“I’m not hanging out with Betty, okay?”

Los Angeles is made for motorcycles, the evenings warm, the bright lights on Sunset glowing, all of those familiar sites rushing past: Hollywood High, Crossroads of the World, the Cineramadome. I pulled into the Music Plus parking lot and parked next to Theresa’s BMW. She sat on her hood, smiling her dimply smile.

“Want to hang out at my house?”

“Come on,” she said, and she jumped into the driver’s seat. We rolled down Vine Street, past the filth and decay of Hollywood toward the mansions of Hancock Park. Theresa parked in front of one of the giant houses and cut the engine. The place was even bigger than Della Bryce’s house, but there were no uniformed servants nor leopard pelts, no enormous paintings of Theresa’s father. One dark hallway contained a few photos and other mementos, but that was it for Hollywood glamor. In fact, the interior was downright spartan: a simple couch, a small television, lots of empty space.

“Where’s all your furniture?’ I asked.

“I don’t know. It’s been a while since Daddy’s series was cancelled, I guess. Come on, I want to show you something,” she said. We went upstairs to her room, where she pulled out a foot locker filled with Guns N’ Roses memorabilia: bootlegs, handbills, magazines, newspaper clippings. “I’ve been collecting since they were just a local band,” Theresa said.

“I see that.” The stuff was amazing, like a trunk full of Beatles Liverpool memorabilia. “Where is everybody?”

“I doubt your dad would be too thrilled with Cool kicking around his house.”

“Oh, stop. He wouldn’t care, and he wouldn’t remember I called you Cool.”

We went downstairs and watched some television. “Let’s go do something,” Theresa said.

We jumped back into her rattletrap BMW and she shoved a tape in the deck. The James Gang’s “Funk #49” blasted from the speakers.

“No, it just surprised me.”

“This song is bad,” she said, and she cranked the volume. We wound through Laurel Canyon, past the little grocery store and the sites of all that ’70s awesomeness.

“Can you imagine what it must’ve been like being a kid in those houses?” I said.

“I mean, like, David Crosby dropping by to hang out or Joe Walsh jamming in your basement or whatever.

“It is. I used to play at one of my school friend’s houses all the time. His dad was just like every dad, only he was Bob Dylan.”

“Hey, do you kids want some cookies?” I said in my best Dylan voice.

We wound up Mulholland Drive, sat on Theresa’s hood and stared at the city lights. “So  what’s up with you and Jody?” she asked.

“I hope so. I moved all the way across country for her.”

“But you seem so unhappy.”

“Do you really see yourself with her forever?” Theresa asked.

“That’s sweet,” she said. LA flickered in the distance, the long, straight path down Western Avenue glowing like a runway, waiting for me to leap from the road’s narrow shoulder and take flight. Los Angeles at night made anything seem possible.

“Let’s go,” Theresa said. We wound back down the hill in silence. Theresa pulled into the record store’s parking lot and turned off her car.

“Thanks for driving,” I said. “That was really cool.”

“Okay. I’ll catch you tomorrow at work,” I said, and I stepped out of her car. I was halfway to my motorcycle when I heard her door open.

“Wait,” she said, and she walked toward me. “Give me a hug.” We wrapped our arms around each other. Theresa pulled me close and we stayed like that for a moment too long, until my body betrayed my interest and she ground her hips against mine and pressed her face into my chest. I looked down at the tangle of auburn hair pressed against me.

She looked up, eyes filled with joy and kindness, deep dimples punctuating her sweet smile. She grabbed my face and pulled me to her. She felt good. She tasted good. No one had kissed me like that in months. I was off the shoulder, soaring over Hollywood.

“Okay,’ Theresa said, and then she kissed me one last time and she was gone.